From Joliet to Powerful D.C. 'Prince'

Just as resilient Yankee slugger Lou Gehrig eventually played his last game, just as every perennial Broadway hit one day rings down the final curtain, so Robert Novak has written his last newspaper column. The dramatic and unexpected end to Novak's newspaper career was announced Monday after a "dire diagnosis" of brain cancer.

Novak's hugely influential run -- after the passing of William F. Buckley, he became the longest-running syndicated political columnist in America -- began May 15, 1963, in a column written with Rowland Evans Jr. Evans' boss at the New York Herald-Tribune had been pressing Evans to write a six-day-a-week news column and, concerned about the workload, Evans had reached out to Novak, then a 31-year-old Washington correspondent for the Wall Street Journal.

Within a year, Esquire magazine was listing Evans and Novak among the most powerful journalists in America. Their combination of tenacious reporting and sharp perspective made their "Inside Report" a fixture on the Washington scene. 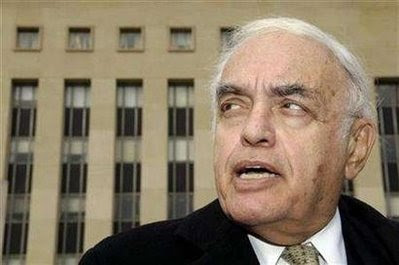 Their influence grew as they became a presence on TV -- "Evans and Novak" was an early hit for the fledgling CNN, and Novak became a fixture on "The McLaughlin Group," an early political gabfest, as well as other shows -- "The Capital Gang," "Meet the Press" and "Nightline."

They made a natural team, balancing each other -- Evans was 10 years older, patrician, a Philadelphia blue blood, Yale graduate and friend of John F. Kennedy. Novak was born in Joliet, attended the University of Illinois, was Jewish (at the time; he eventually converted to Catholicism) and, perhaps ironically, the more conservative of the two.

Despite their differences, together they wrote magazine articles and three books -- collaborating on Lyndon B. Johnson: The Exercise of Power; Nixon in the White House: The Frustration of Power and The Reagan Revolution -- and issued newsletters, creating a "cottage industry" of news and commentary.

"Evans and Novak have practiced a form of journalism unlike anyone else's -- simultaneously fact-based and axe-grinding, far-ranging and arcane," the Washington Post noted on the 25th anniversary of their column in 1988. "Deliberately melding their styles and even their ideologies, they have broken news and possibly careers."

Evans retired from the column five years later, but Novak carried on, carving a reputation for himself as the "Prince of Darkness" for his ability to find inside information and put it to maximum effect.

The epitome of Novak's influence as "the troll under the bridge of American journalism," was the Valerie Plame affair, a political firestorm that Novak ignited on July 14, 2003, when he ran a column asking why former diplomat and Bush administration critic Joseph C. Wilson had been sent to Africa to investigate a government report alleging that Saddam Hussein had been trying to buy yellowcake uranium.

"Wilson never worked for the CIA, but his wife, Valerie Plame, is an agency operative on weapons of mass destruction," Novak wrote. "Two senior administration officials told me his wife suggested sending Wilson to Niger to investigate the Italian report."

Revealing the name of a CIA agent could be a federal crime, and the identity of those officials who spoke to Novak became a political and legal question that resonated for years. The Justice Department launched an investigation. A special prosecutor -- Chicago U.S. Attorney Patrick Fitzgerald -- was named, and Vice President Dick Cheney's chief of staff, Lewis "Scooter" Libby, ended up sentenced to prison for 30 months -- not for anything he told Novak, but for his conduct during the investigation -- though George Bush eventually pardoned him.

Last year Novak chronicled the episode, and his amazing career, in his memoir, The Prince of Darkness: 50 Years Reporting in Washington.
Novak began his newspaper work in 1948 as a reporter on the Joliet Herald-News. He moved to the Champaign-Urbana Courier in 1951, while still in college. After the Korean War -- where he served in the Army and rose to the rank of lieutenant -- he joined the Associated Press in 1954, where he stayed for four years, covering statehouse politics in Nebraska and Indiana before joining the Wall Street Journal.

Though he was based in Washington, Novak's column was originally syndicated through the Chicago Sun-Times, which he considered his home, with pride and loyalty.

"Bob has boundless enthusiasm for political journalism, an unmatched capacity for work and an enduring affection for the Sun-Times," said Sun-Times columnist Steve Huntley, who worked closely with Novak, first as metro editor, then as editorial page editor. "Although he wrote three columns a week, a newsletter and books and appeared regularly on television, he always was ready to do more for Sun-Times readers. Whenever big news broke, Bob was there volunteering to write an extra article for the paper. Whenever I asked him to do something special for us, he had only one response: 'When do you need it?' He always got it in before that deadline, and it always reflected the superb reporting and analytical and interpretive talents he demonstrated in his columns across four and a half decades."

Novak's column ran in as many as 250 newspapers around the world. His last column appeared in the Sun-Times July 27, and fittingly parsed the nuances of the presidential election, still written with the sharp style that Novak recognized as controversial and reveled in.

"This column has been accused, before and after Evans retired, of being Red-baiter, Arabist, Chinese Communist and U.S. corporate apologist, labor-baiter, homophobe, war monger, isolationist -- and most recently, unpatriotic conservative," Novak wrote on the 40th anniversary of his column in 2003. "All these are base canards, but they reflect the tensions of our era. The truth is that in every column, we were reporters."

Email ThisBlogThis!Share to TwitterShare to FacebookShare to Pinterest
Labels: Media and Culture, Politics