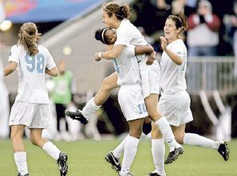 North Carolina plays its high-pressure game to perfection, smothering Notre Dame's prolific attack and getting goals from Heather O'Reilly and Casey Nogueira on the way to its 18th NCAA title

The North Carolina senior forward scored one goal and assisted on another to help the Tar Heels achieve their yearly aim -- an NCAA championship.

With a 2-1 victory over Notre Dame on Sunday, UNC soothed some of the pain from the previous two seasons where it saw fantastically talented teams fail to capture the title.

"I honestly couldn't be happier," said O'Reilly, who was named the most valuable offensive player in the College Cup. "I think this team, from the beginning, I knew it was special."

The team's quality was on display at SAS Soccer Park as UNC thoroughly dominated the nation's top scoring offense en route to its 18th NCAA championship. Freshmen made up more than half of UNC's lineup; yet they played the classic Carolina pressure game superbly.

Leading that charge was O'Reilly, who knows better than any current Heels player how cruel the climb to a national championship can be.

As a freshman, O'Reilly was an integral part of the 2003 national title team, a squad so dominant it outscored opponents 32-0 in the NCAA Tournament. But after the Heels were eliminated in 2004 and 2005, O'Reilly was devastated.

She leaves the Heels -- she will join the U.S. national team to train for the Women's World Cup next semester -- as a team keenly aware that just being Carolina isn't enough. She made sure in her final game to remind them, repeatedly warning, "Don't settle."

During the NCAA quarterfinals, UNC center back Jessica Maxwell broke her left ankle, which threatened UNC's ability to effectively run its semi-flat back 3 defense -- a high-risk system that depends on good communication.

But with junior Robyn Gayle at center back, the Heels displayed so much speed and skill that they kept top-ranked Notre Dame (25-1-1) from establishing its offense for 75 minutes.

"The philosophy we had in this game was to try and play the game in their half," UNC coach Anson Dorrance said. "Their attacking personalities are wonderful, so we didn't really want to play it in our end."

The Fighting Irish brought the nation's top offense into the game, having scored 84 goals. But Notre Dame struggled to get the ball to Kerri Hanks and Michele Weissenhofer -- its offensive playmakers -- and when it did, UNC's defense was just a bit quicker.

In the 18th minute, UNC took Notre Dame further out of the game. With four Irish players around her near the midfield, freshman Casey Nogueira reversed the ball to create space and sent a diagonal pass to a streaking O'Reilly.

O'Reilly's speed allowed her to burst past two Irish defenders and take possession near the corner of the 18-yard box. Goalie Lauren Karas raced out to meet O'Reilly, but the UNC forward put a quick touch on the ball to beat Karas.

Three Irish players desperately tried to block the net, but O'Reilly chipped the ball over two and the defender Kim Lorenzen couldn't get there in time.

"I thought once that goal, with the way it happened, with that kind of breakdown, the game turned for them," Notre Dame coach Randy Waldrum said.

O'Reilly was the first field player out of the locker room after the half, warming up by herself.
Soon after, she fed Whitney Engen, whose cross was converted by Nogueira on a header in the 47th minute, giving UNC a 2-0 lead.

Although the Irish got their game going late -- when the Heels rested O'Reilly and Nogueira -- it was too late to prevent UNC from capturing another title.

The accomplishment is more impressive given the youth of the squad. UNC started seven freshmen in the second half, indicating a bright future for the Heels.

But Sunday, the future wasn't nearly as important as celebrating a return to the top.

"I haven't really grasped the feelings and emotions of it," said Gayle, a member of the Canadian national team. "It's not just to bring Carolina back, it's something for the program, for the alumni. I'm so happy for Heather, Libby [Guess], [Jennifer] Perkins, and [Elizabeth Lancaster] to be able to leave with this title. They more than deserve it
"... Growing up in Canada, even before playing soccer, this is were I wanted to be. Right now in this moment is where I've wanted to be all my life."

Staff writer Rachel Carter can be reached at 829-8953 or rcarter@newsobserver.com.
Posted by jtf at 9:49 AM