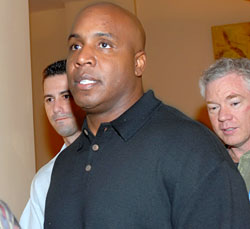 
LAKE BUENA VISTA, Fla. -- The lobby vigil went deep into the afternoon, devouring everyone in its path. You didn't dare leave the ground floor of the Dolphin Hotel, certainly not for lunch, but not even for a glimpse of Florida sunshine. Not when Barry Bonds was in the house and he was -- get this -- looking for a job.

Understand this about the superstar mind-set: Players like Bonds don't show up at the Winter Meetings. They just don't; it's beneath them. The industry convention is normally (over)populated by reporters, professional autograph seekers, gawkers and, of course, baseball executives who are supposed to be chasing free agents, not the other way around.

But this isn't an ordinary winter for Bonds, who, despite his inevitable coronation as the game's all-time home run leader, is discovering a lack of industry interest. Potential employers all use the same politically correct praise for Bonds -- great player, once-in-a-generation talent -- but when it comes to actually hiring him, none has shown an appetite for his baggage and potential legal problems.

So Bonds took the initiative on Wednesday, parading through the lobby's traffic en route to the elevators. The slugger must've known a small riot of reporters would immediately descend upon him, but it was apparently worth the annoyance (and embarrassment) in exchange for a face to face with San Francisco general manager Brian Sabean.

Once inside the Giants' suite, Bonds could ask the off-season's most pressing question: Why hasn't a 2007 contract been finalized?

Actually, both sides know exactly why. It's because Bonds is looking for $18 million for next year, cloning his 2006 salary, and he wants performance-based incentives that not only fatten the deal's dollar value, but guarantee a 2008 contract, too.

The last thing the Giants want is Bonds hanging around after he's caught and passed Hank Aaron next summer. Like an old married couple, the two sides have grown tired of each other and the Giants, in particular, are ready to move on as soon as it's politically feasible.

They know they can't jettison Bonds just yet, however. They have too many years invested in him, and are too closely linked to his pursuit of Ruth and Aaron. And there are plenty of Bay Area fans who support Bonds, who have no problem with whatever he's been injecting himself with since 1998, and want to be in the ballpark the moment he hits homer No. 756.

The Giants, no dummies, aren't about to walk away from a summer of sellouts. But they're not about to write a blank check to Bonds, either, no matter how persuasively he charms them -- or tries to intimidate them in person.

What other reason could there be for Bonds to ask for an in-person interview with Sabean? The slugger is understandably frustrated at how little progress has been made, although his agent Jeff Borris is trying to rationalize it all by saying, "It's a business."

"[Bonds'] status is a healthy, 42-year-old unemployed baseball player," the agent told the Associated Press. "He is looking for work on a team with a chance to make the postseason, as a left fielder, DH or a combination of both."

Of course, there are plenty of teams, especially in the American League, who could use a power-hitting left-handed batter. The A's and Orioles, for example, would benefit from Bonds' offense, at least in theory. But Oakland GM Billy Beane passed on the idea weeks ago, and the Orioles never even brought the idea to owner Peter Angelos.

An executive of a third team said its brain trust held a roundtable discussion about Bonds in November. First, they decided Bonds would be too expensive. Second, they questioned whether he could get along with his teammates and would challenge his manager, in the clubhouse or in the dugout.

And finally, the discussion drifted toward karma, and whether taking on an alleged steroid user would doom them.

"We asked ourselves, 'do we really want to win this way?' " the executive said. With that, the debate evaporated; Bonds' name was never mentioned again.

The Giants are the only team with a wide-enough berth for Bonds now; both sides know it. The charade of Bonds luring other clubs into negotiating is just that, a ploy designed to pressure the Giants.

Not that it's working. One Giants official told ESPN.com on Wednesday, "There may be a phantom team out there somewhere -- but we can't find it."

The real mystery, however, was what Bonds was doing all afternoon inside the hotel. He made a grand entrance at about 10 a.m., disappearing into an elevator. He returned to the lobby briefly at about 1 p.m. on his way to a second tower of suites. By 5 p.m. Bonds was gone, hustled out a side exit without being sighted. There were no photo ops, no quotes, no clues.

Whether Bonds and his agent spoke to one team or five remained a mystery. The Giants themselves refused to admit a summit even took place; Sabean said, "I'm not talking about left field today."

But Bonds gave away all his secrets the moment he set foot inside the Dolphin. In fact, Bonds might as well have come equipped with a sandwich board sign:

Baseball GMs, where's your holiday cheer? Doesn't anyone want a guy who's just 22 homers short of breaking the all-time record? Here are some possibilities:

Giants: San Francisco is willing to have Barry Bonds back, but not at his asking price.

Angels: They would be able to add the big bat that they've sought without having to give up any of their young pitchers.

Dodgers: They need a bat, but could be tapped out after adding Lieberthal and Schmidt, and re-signing Garciaparra.

Padres: Could use the money they were using to pay Mike Piazza and apply it toward paying Bonds.
Posted by jtf at 10:50 AM