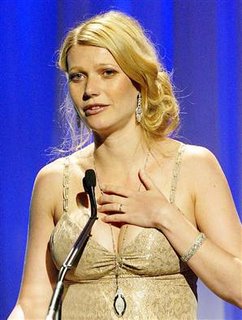 And the Oscar for Most Dishonest Performance By a Spoiled Expatriate American Actress Trying to Dig Herself Out of a Public Relations Hole goes to . . . Gwyneth Paltrow.

Over the weekend, the international press sent out word that Paltrow had trashed her native country during a press event in Spain.

"I love the English lifestyle, it's not as capitalistic as America. People don't talk about work and money, they talk about interesting things at dinner," the Shallow Gal was quoted as telling NS, the weekend magazine supplement of daily Portuguese newspaper Diario de Noticias. "I like living here because I don't fit into the bad side of American psychology. The British are much more intelligent and civilized than the Americans," the 34-year-old reportedly mused.

After creating a global furor, Paltrow crawled to People magazine for help in covering her scrawny intellectual assets. The publication's website claimed the actress was misquoted and that she would neeeeever say anything negative about America.

"First of all I feel so lucky to be American. When you look at the rest of the world, we're so lucky, and that's something my dad always instilled in me," People quoted Paltrow explaining. "I feel so proud to be American." Summoning up all her method acting lessons from past tearful acceptance award speeches, Paltrow emoted: "I felt so upset to be completely misconstrued, and I never, ever would have said that."

The oh-so-wronged actress has, in fact, been reciting from an unambiguous anti-American script for years.

In January 2006, as I noted on my blog over the weekend
(http://michellemalkin.com/archives/006470.htm), the British newspaper the Guardian quoted Paltrow snubbing America in nearly identical language. Same old, same old:

In February 2006, Paltrow was quoted in Britain's Star magazine again disparaging American intellect and decorum: "Brits are far more intelligent and civilised than Americans. I love the fact that you can hail a taxi and just pick up your pram and put it in the back of the cab without having to collapse it. I love the parks and places I go for dinner and my friends."

In 2005, she was quoted on the New York Post's Page Six: "I've always been drawn to Europe. America is such a young country, with an adolescent swagger about it. But I feel that I have a more European sensibility, a greater respect for the multicultural nature of the globe." She was also quoted that year explaining her decision to move to London to the New York Daily News: "I just had a baby and thought, 'I don't want to live there.'" International press reports had her deriding "Bush's anti-environment, pro-war policies" as either a "disgrace" or a "disaster."

In January 2004, Paltrow was quoted in the pages of Britain's Glamour magazine declaring that America was "too weird" because of its overt displays of patriotism. "At the moment there's a weird, over-patriotic atmosphere over there, like, 'We're number one and the rest of the world doesn't matter.'" (She much prefers the dinner chatter of wealthy British hubby and Coldplay musician Chris Martin, who has proclaimed shareholders as "the great evil of this modern world" and who ranted at a British awards show that "We're all going to die when George Bush has his way.")

In 2003, the Scottish Daily Record of Glasgow quoted Paltrow trashing America's president overseas: "I think Bush is such an embarrassment to America. He doesn't take the rest of the world at all into consideration. It all seems to be for him and his friends to keep getting richer at the expense of a nation, at the expense of the environment. It's like a full-scale assault." (No comment from Paltrow about her own Mercedes Benz SUV gas-guzzling assaults on American roads and her multiple ginormous mansion-owning contributions to the nation's eco-catastrophe.)

Paltrow blames the latest brouhaha on a misunderstanding of her "seventh-grade Spanish."
Unfortunately for you, dear, your English is perfect.

Michelle Malkin makes news and waves with a unique combination of investigative journalism and incisive commentary. She is the author of Unhinged: Exposing Liberals Gone Wild .
Posted by jtf at 8:32 AM