Meditations on "The History Boys" 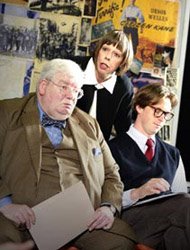 This piece more thoroughly outlines the reasons for the fullness of my revulsion for "The History Boys" whereas the article below just hints at them. - jtf

I won't say I wasn't warned. Extremely discerning people whom I greatly respect told me The History Boys was not really about history, and only about boys in the homosexual connection. But it seemed at least like it might touch on ideas about school and teaching, and at one time I liked the work of Alan Bennett, or thought I did. And I waited until it was made into a film so it would cost only ten dollars instead of thirty or forty.

Still, it was a shock just how perverse it was after all. Under the guise of a friendly play about boys from modest backgrounds aspiring to Oxford, the audience was coaxed into smiling and chuckling about such things as a teacher groping his students (and with the Mark Foley frenzy barely over), and a student commanding a repressed teacher to blank blank blank, that is, administer oral sex on him, expressed in the vernacular.

And the teaching? The play is supposed to be contrasting two styles of teaching, but both styles are inane. The old teacher can't be bothered to prepare a real class, but has the boys sing, act out scenes from movies, pretend they're in a French bordello to practice the language, and identify wisps of poetry here and there. This is supposed to contrast with (and perhaps it is marginally less noxious than) the over-focused-for-success method of the new teacher who advises empty revisionist views of history just to get attention on the Oxford entrance exams, and manages to suggest that the great venerable institution of Lewis and Tolkien is really just a burnt out pile of pretty stones and clever fakery.

The true method in his madness, though, is the modern English desire to destroy any faith in their country at any time in its history. (That's the purpose of Foyle's War, a dark British TV series set during World War II, designed to inform us that even during England's finest hour, the island was full of ratty people who deserved to lose.) No wonder the Muslims think they are entitled to remake Britain.

And the play went on tour throughout Britain. So that audiences in all the provinces are going to hear the surly student tell his teacher that by next week the teacher will be blanking blank blank, that is, administering oral sex on him, expressed in the vernacular. Audiences are expected to smile at it, and many do. The only thing you can say is, Plato was right: Art does corrupt.

This is similar to the reverence accorded to Madonna when she decides to play the proper married lady after her years of turning a couple of mini-generations of American 'tweens into little tramps. One moment the mature English matron writing children's books, the next moment an unhinged celebrity tongue-kissing women on television awards ceremonies. It's the actual mixture of the two modes that is more offensive than one or the other. Something that draws you in with its seeming normalcy and then shoves perversity in your face.
Posted by jtf at 6:45 PM