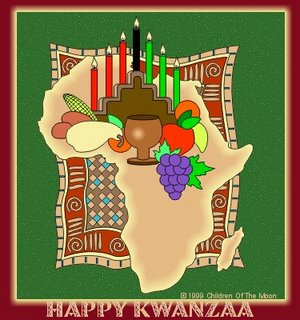 President Bush's Kwanzaa message this year skipped the patently absurd claim of years past that: "African-Americans and people around the world reflect on African heritage during Kwanzaa." Instead, he simply said: "I send greetings to those observing Kwanzaa."

More African-Americans spent this season reflecting on the birth of Christ than some phony non-Christian holiday invented a few decades ago by an FBI stooge. Kwanzaa is a holiday for white liberals, not blacks.

It is a fact that Kwanzaa was invented in 1966 by a black radical FBI pawn, Ron Karenga, aka Dr. Maulana Karenga. Karenga was a founder of United Slaves, a violent nationalist rival to the Black Panthers and a dupe of the FBI.

In what was probably a foolish gamble, during the madness of the '60s the FBI encouraged the most extreme black nationalist organizations in order to discredit and split the left. The more preposterous the organization, the better. Karenga's United Slaves was perfect. In the annals of the American '60s, Karenga was the Father Gapon, stooge of the czarist police.

Despite modern perceptions that blend all the black activists of the '60s, the Black Panthers did not hate whites. They did not seek armed revolution. Those were the precepts of Karenga's United Slaves. United Slaves were proto-fascists, walking around in dashikis, gunning down Black Panthers and adopting invented "African" names. (That was a big help to the black community: How many boys named "Jamal" currently sit on death row?)

Whether Karenga was a willing dupe, or just a dupe, remains unclear. Curiously, in a 1995 interview with Ethnic NewsWatch, Karenga matter-of-factly explained that the forces out to get O.J. Simpson for the "framed" murder of two whites included "the FBI, the CIA, the State Department, Interpol, the Chicago Police Department" and so on. Karenga should know about FBI infiltration. (He further noted that the evidence against O.J. "was not strong enough to prohibit or eliminate unreasonable doubt" – an interesting standard of proof.)

In the category of the-gentleman-doth-protest-too-much, back in the '70s, Karenga was quick to criticize rumors that black radicals were government-supported. When Nigerian newspapers claimed that some American black radicals were CIA operatives, Karenga publicly denounced the idea, saying, "Africans must stop generalizing about the loyalties and motives of Afro-Americans, including the widespread suspicion of black Americans being CIA agents."

Now we know that the FBI fueled the bloody rivalry between the Panthers and United Slaves. In one barbarous outburst, Karenga's United Slaves shot to death Black Panthers Al "Bunchy" Carter and Deputy Minister John Huggins on the UCLA campus. Karenga himself served time, a useful stepping-stone for his current position as a black studies professor at California State University at Long Beach.

Kwanzaa itself is a lunatic blend of schmaltzy '60s rhetoric, black racism and Marxism. Indeed, the seven "principles" of Kwanzaa praise collectivism in every possible arena of life – economics, work, personality, even litter removal. ("Kuumba: Everyone should strive to improve the community and make it more beautiful.") It takes a village to raise a police snitch.

When Karenga was asked to distinguish Kawaida, the philosophy underlying Kwanzaa, from "classical Marxism," he essentially explained that under Kawaida, we also hate whites. While taking the "best of early Chinese and Cuban socialism" – which one assumes would exclude the forced abortions, imprisonment for homosexuals and forced labor – Kawaida practitioners believe one's racial identity "determines life conditions, life chances and self-understanding."
There's an inclusive philosophy for you.

Coincidentally, the seven principles of Kwanzaa are the very same seven principles of the Symbionese Liberation Army, another charming invention of the Least-Great Generation. In 1974, Patricia Hearst, kidnap victim-cum-SLA revolutionary, posed next to the banner of her alleged captors, a seven-headed cobra. Each snake head stood for one of the SLA's revolutionary principles: Umoja, Kujichagulia, Ujima, Ujamaa, Nia, Kuumba and Imani – the same seven "principles" of Kwanzaa.

With his Kwanzaa greetings, President Bush is saluting the intellectual sibling of the Symbionese Liberation Army, killer of housewives and police. He is saluting the founder of United Slaves, who were such lunatics that they shot Panthers for not being sufficiently insane – all with the FBI as their covert ally.

It's as if David Duke invented a holiday called "Anglika," and the president of the United States issued a presidential proclamation honoring the synthetic holiday. People might well take notice if that happened.

Kwanzaa was the result of a '60s psychosis grafted onto the black community. Liberals have become so mesmerized by multicultural nonsense that they have forgotten the real history of Kwanzaa and Karenga's United Slaves – the violence, the Marxism, the insanity. Most absurdly, for leftists anyway, is that they have forgotten the FBI's tacit encouragement of this murderous black nationalist cult founded by the father of Kwanzaa.

Now the "holiday" concocted by an FBI dupe is honored in a presidential proclamation and public schools across the nation. The only principle Kwanzaa promotes is liberals' unbounded capacity to respect any faith but Christianity.

A movement that started approximately 2,000 years before Kwanzaa leaps well beyond collectivism and litter removal to proclaim that we are all equal before God. "There is neither Jew nor Greek, slave nor free, male nor female, for you are all one in Christ Jesus" (Galatians 3:28). It was practitioners of that faith who were at the forefront of the abolitionist and civil rights movements. But that's all been washed down the memory hole, along with the true origins of Kwanzaa.

Ann Coulter is a bestselling author and syndicated columnist. Her most recent book is Godless: The Church of Liberalism.
Posted by jtf at 11:31 AM