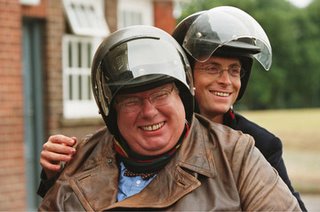 I unwittingly stumbled into this ridiculous movie today and I'm still struggling to overcome the experience. Of course, if one takes the position that virtual foreplay between teacher and student is something to be laughed off, then one may enjoy this cloying bit of work. If you know why the fat man is smiling in this picture at right and you are bothered by it, then I would strongly urge that you avoid this insipid little film. - jtf

Having conquered first the London stage and then Broadway, playwright Alan Bennett has adapted his play "The History Boys" for the screen, enabling those of us who never get to Broadway productions to finally see exactly what all that Tony Award-winning fuss was about. Nicholas Hytner directs the very fine original cast from his National Theatre production, so truly, this is as close to the theatrical experience as a moviegoer could hope for.

The story, set in Northern England in the 1980s, follows eight schoolboys (they're 17 or 18) through an intense post-term cram session intended to win them the Holy Grail of English academia, acceptance to Oxford or Cambridge. Their teachers include an old favorite, Hector (Richard Griffiths), a rotund fount of poetry and literary references, who encourages them to practice their French by acting out scenes set in a brothel; and Mrs. Lintott (the magnificently dry Frances de la Tour), who teaches history in a more traditional manner.

As the story begins, the fussy headmaster (Clive Merrison) has just hired a buttoned-up Oxford graduate named Irwin (Stephen Campbell Moore) to give the boys "edge," or rather, to teach them to manipulate the essay and admissions system. He's very clever and young, "about five minutes older than we are," says Scripps (Jamie Parker), the skeptic of the bunch.

Actually, all the boys are skeptical, and their ensuing brattiness comes at us at top speed, so it takes a while to attach individual personality traits to them.

There's the gay student, Posner (Samuel Barnett), who adores the coolest, cutest boy in school, Dakin (Dominic Cooper, memorably seductive). Timms (James Corden) is plump and confused by poetry. Rudge (Russell Tovey, in a performance that manages to marry humility and bluntness) is what we on this side of the Atlantic like to call a dumb jock. Crowther (Samuel Anderson) wants to be an actor and Akhtar (Sacha Dhawan) craves success. The eighth is Lockwood (Andrew Knott), who, sadly, does not make much of an impression.

Their witty banter with Hector and Irwin is arch, precocious, and feels, not surprisingly, like dialogue from the stage. It's a bit exhausting.

Bennett has "opened" up his play, and director Hytner takes us outside from time to time, but we're definitely in a piece of entertainment that has the rhythm and urgency of a busy stage performance. No one hems or haws, and no trip through the hallways of the school is silent; they're all opportunities to drop a quick joke or update us on some crucial bit of information.
At first blush, "The History Boys" seems a straightforward tale of a clash between the ambitiously modern (Irwin) and the old school, albeit eccentric, Hector, who cares more about the boys' happiness than their ambition. Thanks to Hector, his boys can spout Auden, quote Bette Davis speeches and sing their way through many a lovely old ditty. The boys enjoy their old teacher, but they also find him somewhat foolish, and Irwin seems a more appealing role model to many of them. It's as if Robin Williams had a real rival in "The Dead Poet's Society."

Then Bennett adds another layer to the story, a pair of subplots about attraction between student and mentor. The one involving Irwin is handled with grace and sensitivity, but the second puts the plot on perilous ground; we're not sure what to make of it. Hector is a groper. He offers his students rides on his motorbike and reaches back whenever he can to give their genitals a good squeeze. This habit is treated by the boys with a sort of old-fashioned tolerance; they good-naturedly trade off the gropee duty. The headmaster is annoyed when he finds out about it, but even he characterizes it as "more appreciative than investigatory."

Americans are notoriously prudish, but if it is prudish to say it is hard to swallow Bennett's seeming implication that enduring a groping is well worth the trade-off for the Auden expertise, I'll take the label. When Hector insists "nothing happened," the image of him grinning gleefully (Griffiths, by the way, is a man who does not take kindly to the cinematic close-up) while groping offers a clear contradiction.

Having created this moral confusion for the audience, Bennett sweeps it all away with a mushy, sentimental ending that would seem tidy if we weren't all too aware of the pile of dirt the playwright left under the bed.