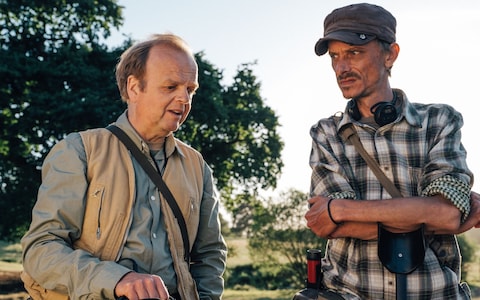 Early last year, English actor Mackenzie Crook found gold on the farm where he filmed the second season of Detectorists, the BBC comedy that he wrote, directed, and costarred in with Toby Jones. Subsequent research by the British Museum revealed what he’d detected: a penny-sized pendant or earring, dropped, perhaps, by a careless Roman nearly 2,000 years ago. When Jones’s Detectorists character, Lance, unearths gold in the show’s second-season finale, he does the metal-detecting community’s traditional gold dance. Crook wrote that reaction to Lance’s fictional find, but he didn’t dance in real life. “It literally was the last signal of the day,” Crook tells me by phone, referring to the bleep and bloop from his metal detector. “It was getting dark, and I didn’t realize what I had until I got it back home. I didn’t want to dance in my kitchen on my own late at night.”

As much as any other pastime, metal detecting seems made for metaphor. When Crook’s headphones-clad characters spend their days sweeping fields with their wands, listening for a signal, he says, they’re “actually searching for love and for where they belong and all these other things in their life.” If the 46-year-old Crook can see the symbolism in his characters’ ceaseless search, then maybe we can spot a parallel in his own unwitting gold discovery at the end of a day. By the time Crook started writing Detectorists in 2013, the longtime caricature actor was running out of time to play a regular guy. And until he developed the idea, he didn’t know how precious the project would turn out to be.

Even after 19 half-hour episodes, Detectorists is difficult to describe. That becomes clear when I ask Crook for his synopsis of the series, whose third and final season finished airing in the U.K. last month and premieres in the U.S. today on Acorn TV, a streaming service that produces and ports international programming from Great Britain and other English-speaking countries. (The first two seasons are also available via Netflix.) “I guess I’d say it’s a comedy about ordinary people and their hobbies,” Crook answers, confidently at first. “That’s initially what I set out to do.” He pauses. “But it’s actually turned out to be much more than that. And in hindsight, I can’t really claim that I set out to create this thing that explored so deeply these ordinary lives. Essentially it’s about two friends who just spend their time out in the fields metal detecting. I just totally proved your point there. I can’t really describe it.”

Crook, whose haunted eyes and gaunt frame American audiences will recognize from his roles as the wildling warg Orell on Game of Thrones and comic-relief Ragetti in the Pirates of the Caribbean series, hardly had to describe it to the BBC, with whom he’s worked for close to 20 years, beginning with his breakout role as officious, prank-prone assistant Gareth Keenan on the U.K. edition of The Office. (For U.S.-only Office viewers, Gareth begat Dwight.) Crook says that the BBC wasn’t bothered by the fact that “nothing much happens” in the typical Detectorists episode, which also had the virtue of cutting down costs. Bolstered by his preexisting relationship with the network, Crook’s pilot script sold the idea, despite his lack of experience on the other side of the camera. “They didn’t ever meddle with it, try to increase the joke count or speed it up or anything like that,” he says. “They sat back and let me do what I wanted and create what I had in my head.”


What he had in his head was more humdrum than most shows that get a green light. Jones’s Lance, a small-town forklift-truck driver and amateur musician who fears performing publicly, lets himself be bullied by the ex-wife who left him for a manlier man. Crook’s Andy, who does dispiriting and menial temp work—as Crook did before he began acting—in support of a fledgling family, dreams of becoming an archaeologist and aspires to own a shed. Neither has prime-time-TV looks or leads a life of high stakes. But when they’re wearing their gear and walking the countryside, they’re transformed into time travelers and explorers, experts in their specialized field and upstanding representatives of the Danebury Metal Detecting Club, a collection of misfits run with military ardor by a retired policeman named Terry, who’s always alert to the risk of rival detectors encroaching on their claims.
Although they’re convinced that their favorite territory contains a Saxon treasure trove, Lance and Andy usually go home empty-handed, with few trophies to display at the weekly DMDC meeting besides buttons and ring pulls. But amid the mundanity of digging up dirt, discussing quiz shows, and retiring to the pub, they exchange advice and support and immerse themselves in the extended, easy silences that unfold between true friends. As the two comb the countryside, the camera pulls back until they and the tools of their trade blend into timeless, eye-pleasing pastoral landscapes, whose glowing greenery Crook, a first-time writer-director, attributes to cinematographers Jamie Cairney and Mattias Nyberg. Silence between characters rarely leads to silence on screen, thanks to a soothing score by English actor and folk singer-songwriter Johnny Flynn (Lovesick, Genius), whose plaintive theme song resurfaces so often that Crook calls it “almost another character in the show.”
Detectorists won a BAFTA for Best Scripted Comedy in 2015, and it gets glowing reviews—albeit not enough of them for the show to appear on Rotten Tomatoes or Metacritic. (The show does crack the all-time TV top 200 based on IMDb user ratings.) “It’s been so well-received, by not a huge amount of people, but those people that have found it have taken it to their hearts, and it’s had this quite emotional response,” Crook says. Like Parks and Recreation and an assortment of lower-profile sitcoms with small but devoted audiences—Party Down, Slings & Arrows, Mozart in the Jungle—Detectorists provokes such strong attachment in part because it concerns a subculture that’s so far from the worlds of doctors, lawyers, and law enforcement that take up a disproportionate amount of our TV time. There’s no high-concept sci-fi or fantasy here, no mystery box to unlock in essay-length theories on Reddit. Detectorists is ostensibly smaller in scope and ambition than the bigger-budget shows that shoulder it out of the spotlight, but few other sitcoms can compete with the pathos that comes from its loving look at a little-loved pursuit, and the people who find that pursuit fulfilling.

According to Crook, members of the detecting community were wary when they heard that the BBC would be basing a show on their hobby. “As soon as it was announced, before it had been shown, people just assumed that oh, it’s going to be portraying them as losers,” Crook says. “But as soon as the first episode went out, it was clear that that’s not what I intended to do.” Detectorists deftly finds the humor in its characters’ quirks without portraying them as pitiful. They’re outcasts, in some respects, but the script never strips them of their dignity. Crook found that balance after first straying too far in a more mocking direction. “When we started writing it, I had a different character dynamic,” Crook says. “They were a little bit more laughable, and Lance’s character, especially, was a bit of a dick and a bit more mercenary. … But as soon as Toby came on board, that character changed, and I realized that these guys are guys that I wanted to hang out with.”

No one on Detectorists is irredeemable, and every dispute is leavened with love. Andy’s relationship with his wife, Becky—played by Rachael Stirling, the real-life daughter of Diana Rigg, who plays her mother on the show—which Crook says he based on his own marriage, is tense at times, strained by Andy’s constant detecting. But in a welcome contrast to so many series about troubled men and their spoilsport significant others, Andy understands his duty to his family, and Becky supports his quixotic quest. “I deliberately try to steer away from those sorts of clichés, the nagging wife,” Crook says. “Also, when Andy has to move in with his mother-in-law, I thought it would be easy to make her insufferable, this horrible dragon. And I thought, no, it would be far cleverer, surely, to have them essentially getting on with each other, just in too close a proximity.”
The compassion that softens so many of Detectorists’ gentle jabs is a giant departure from the mockumentary that launched Crook’s career. The Office, a classic cringe comedy, was driven by David Brent’s unwilling outsider status and obliviousness to his own brutishness. Maybe being the butt of so much scripted abuse during his days as Brent’s sidekick contributed to Crook crafting Detectorists’ disarmingly earnest tone, which he says was inspired by the “very English” sitcoms created by the comedy writing duo Esmonde and Larbey in the ’70s and ’80s. “They were very uncynical and there was no cruelty in them, and I was sort of harkening back to them,” Crook says. “I wanted to see if a sitcom could be done without this awkward, painful humor that is so prevalent these days.” Detectorists’ neurotic characters aren’t trying to fit into a world where they’re perpetually picked on. In this show, they have the home-field advantage.
Crook acknowledges that creating Andy was an attempt to escape the strictures imposed by his previous roles. “I don’t know if I’ve actually thought about that before, but yeah,” he says. “The parts I get offered are either caricatures or the quirky funny part or the dick or whatever, so I think you’re right that I just wanted to play a regular guy. … Andy’s really just a more pathetic version of me. It was quite a breath of fresh air to do that.”

After sampling that air for the first time in his 40s, Crook wants to keep breathing it, even if it means that he has to supply his own “regular guy” parts. Having brought one passion project to a satisfying end, he’s currently writing an as-yet-unannounced film (also set in a rural area) for the BBC, which he describes as “an evolution of Detectorists.” But before he can close the book on one brainchild, Lance and Andy have to finish their last season stateside, where viewers who’ve discovered them have welcomed them warmly. Metal detecting is different here; as Crook notes, “Your country’s spread out over such a massive area that the finds are less concentrated.” With scripted content on so many different channels and streaming services, good TV is becoming less concentrated, too. Anyone who discovers Detectorists’ delights amid the many false signals owes themselves the gold dance that Crook couldn’t do.
Posted by jtf at 4:43 PM