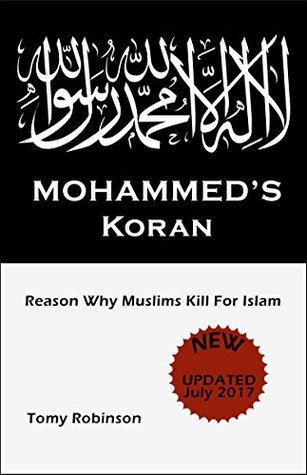 On January 7 of this year, I published an article at PJ Media about Amazon removing doormats featuring Qur’an verses from sale because the Council on American-Islamic Relations (CAIR) found them offensive. In that article, I asked:

How long will it be before Hamas-linked CAIR starts demanding that books that criticize jihad terror and Sharia oppression of women, gays, and others also be dropped by Amazon?

The answer turned out to be 51 days.

It’s the British government and the BBC, rather than CAIR, that are likely behind this, but Amazon has just dropped the book Mohammed’s Koran by the renowned British activist Tommy Robinson and Peter McLoughlin -- and apparently only because its censors dislike Robinson. In the last two weeks, Robinson spectacularly embarrassed the BBC by exposing the bias and dishonesty of its reporter John Sweeney. The retaliation has been swift and severe: Robinson has been banned from YouTube and Facebook, and now his book has been withdrawn from sale.

[T]his is the twenty-first century equivalent of the Nazis taking out the books from university libraries and burning them. Can you think of another scholarly book on Islam that has been banned by Amazon?Mein Kampf is for sale on Amazon. As are books like the terrorist manual called The Anarchist Cookbook.

McLoughlin is correct that Amazon’s behavior has been wildly inconsistent. He adds that Amazon officials are steadfastly mum on why the book was banned:

[They] refuse to reinstate the book and refuse to explain why it has been banned. So they have banned the No.1 best-selling exegesis of the Koran. I can’t get my head round it. Every few weeks for the past 18 months they had emailed me asking to put it into special sales programmes, as it was selling so well. For 18 months they sought to profit even more from the sales.

“As dark as my vision is,” McLoughlin concludes, “I thought we were 10 to 20 years away from dissenting books from being banned.”

Indeed. Those who object to my labeling Leftist totalitarians “fascists” should take careful note of this story. What group is most famous for burning books? That’s right. And what group is doing it now? Right again. I predicted this, but like Peter McLoughlin, I didn’t think it would come so soon.

This is an extremely ominous development. Amazon and Barnes and Noble -- which is also not carrying this book -- have a virtual monopoly on book sales. When these two giants refuse to carry a book, that book effectively does not exist. If they are now going to ban books that are critical of Islam and opposed to jihad terror and Sharia oppression of women, gays, and others, then an Islam-critical perspective will be almost impossible to find anywhere.

Some will applaud this as the ultimate and laudable demise of “Islamophobia,” but it is actually far more insidious. If the motivating ideology of jihad terrorists cannot be criticized or even discussed openly, jihad terrorists will have an absolutely free hand. They will act with impunity, secure in the knowledge that any criticism of their activities will be shut down the same way Tommy Robinson was shut down.

Whatever anyone thinks of Tommy Robinson or the Qur’an, this is a serious matter that anyone who cares about the freedom of speech should be extremely concerned about.

Mohammed’s Koran is critical of Islam’s holy book. It endeavors to illustrate how violent jihadists justify their actions by referring to Islamic texts and teachings -- and that’s all. Robinson and McLoughlin call for no violence. Their book is accurate.

Anyone who has written a book that is critical of anything should read the writing on the wall and realize that once this censorship begins, it won’t end with Tommy Robinson or Qur’an-critical books. But they won’t. PEN, the international organization that is supposedly dedicated to defending the freedom of speech, is made up of hard-Leftists who won’t utter a whisper in defense of Tommy Robinson’s book, or a murmur of protest that it is not allowed to be sold.

They don’t realize that what is being done to him can be done to them. But it will be.


Tommy Robinson Turns the Tables on the BBC