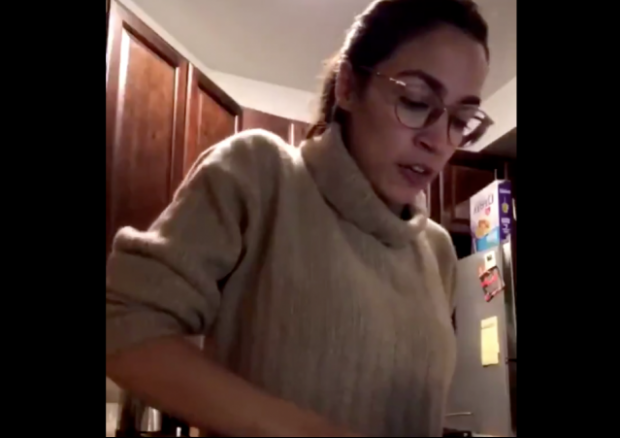 Hardly a day goes by without the new face of the Democratic Party, Alexandria Ocasio-Cortez (D-N.Y.), unconsciously giving the Right more ammunition to ridicule her so-called “policies.”


The latest was an SNL-like video she made in her kitchen cooking chili during which she berated America for the impending environmental apocalypse.
The inanity of her comments is stupefying enough. For example, she actually pauses to look at the camera and says: “If we do not act there is no hope. The only time we can hope is when we act.” But her Miss World contestant soundbites, are outdone by the shear irony of the whole film. Rush Limbaugh commented, as only he can:

And in this cooking video, everything she’s using is powered by fossil fuels! From her stove to her refrigerator. The food that she is making arrived in her kitchen after having been delivered for part of the route by fossil fuels.

Those would be the same fossils fuels Ocasio-Cortez wants to ban in America under her Green New Deal.
While theses gaffes and the memes to which they give rise are truly amusing, the humor of it all shouldn’t give the Right a sense of security. The New Green Deal is a socialist plan for the largest redistribution of wealth the world has ever seen, and it will cost you $93 trillion .
The GND is “watermelon policy”—green on the outside and deep red on the inside. It’s socialism under the cloak of environmentalism. What’s more, the proposal isn’t merely the collected ravings of a fringe freshman congresswoman. The Green New Deal has been endorsed by a slew of Democrat representatives and senators, including some who think they have a shot at being the next president, such as Kamala Harris (D-Calif.).
As a result, now more than ever, we must tell the truth about socialism—the socialism of today and the socialism of the past. We must remind people how in Venezuela, the otherwise ardent left-wing reporter, Jorge Ramos, caused the dictator Maduro to storm out of an interview and was arrested when he showed footage of Venezuelans eating discarded food out of a dumpster truck. And we must talk about what socialism actually wrought throughout the 20th century.
I have lived a blessed life, born into freedom in the United Kingdom and now a proud American living in the freest and greatest nation in the world. But for me socialism is not some theory. It’s not a policy paper written under the name of a former bartender from the Bronx. Socialism, and its final evolution, Communism, were realities that my family experienced. The consequences of that reality changed my life forever one sunny day at the beach when I was a child.
We lived in England when I was a child but our family would vacation in France. One summer, I must have been 8 or 9, we were at the seaside in southern France. I was playing on the shore and my father was swimming in the sea. When he came out, I recognized something I hadn’t seen before. On both of his wrists there were deep white lines yet he wasn’t old enough to be wrinkled there. Innocently, I asked him: “Dad what’s that?” Without any hesitation or emotion he answered: “That’s where the secret police bound my wrists together with wire behind my back and hanged me from the ceiling of the torture chamber.” That moment my life changed. That moment history became real for me and the struggle for freedom took physical form.
My father’s story of persecution under a left-wing regime is not unique. But how many Americans know these stories? How many could tell you that the ideas of Karl Marx killed more than 100 million people in just a little more than a century? From Russia to Cambodia, from Poland to North Korea, the story is the same.
When almost half of Millennials polled say they prefer socialism to free-market democracy, we understand where the 29-year-old Alexandria Ocasio-Cortez comes from and we know the threat her ideas pose to freedom in America.
The 2020 presidential election will not be about GOP versus DNC. It won’t even be about Donald Trump versus the Establishment. Our next election, and all elections for at least a generation, will have to undo the brainwashing of a generation. These elections are going to be about one thing: freedom versus oppression.
Posted by jtf at 9:30 AM