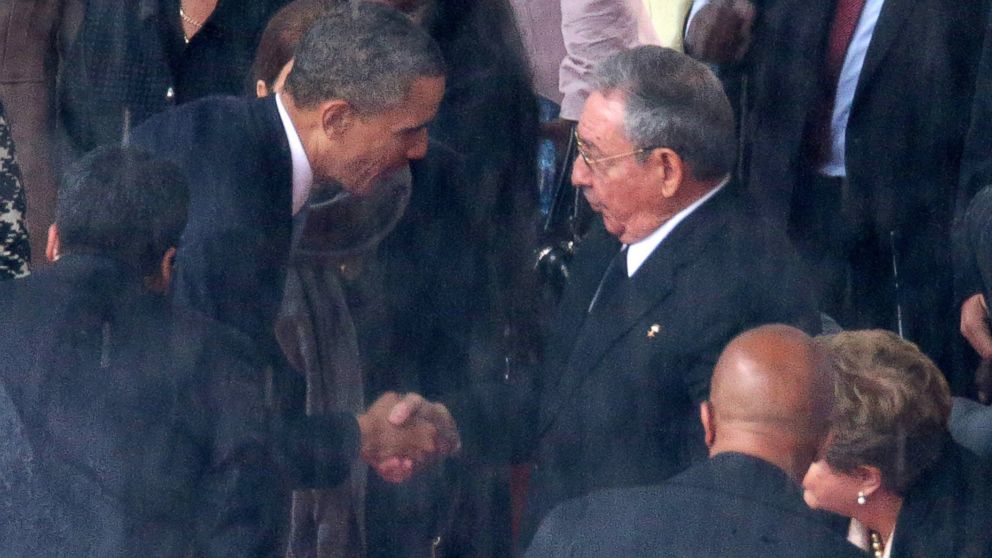 Did you notice the timing of  President Obama’s economic lifeline to Castro as announced on December 17th under the guise of “changing [our] relations with the people [emphasis mine] of Cuba?”

No? But you have noticed the price at the gas pumps, right? These two items are closely related. Oh, and by the way, every atom of evidence shows that the actual people of Cuba actually want U.S. sanctions against the Stalinist regime that tortures them tightened. So perhaps President Obama should stop insulting the intelligence of Cuba-watchers by claiming to speak and act on their behalf.  Here’s their reaction to this week’s early Christmas gift from Obama to the Stalinist dictator who tortures them:

“Sadly, President Obama made the wrong decision. The freedom and democracy of the Cuban people will not be achieved through these benefits that he’s giving — not to the Cuban people — but to the Cuban government. The Cuban government will only take advantage to strengthen its repressive machinery, to repress civil society, its people and remain in power.”  (Berta Soler, leader of “The Ladies in White,” Cuba’s biggest dissident group.

“[Alan Gross] was not arrested for what he did, but for what could be gained from his arrest. He was simply bait and they were aware of it from the beginning… Castroism has won.” (Yoani Sanchez, Cuba’s most internationally famous dissident.)

“I feel as though I have been abandoned on the battlefield.” (Dr. Oscar Elias Biscet, former Cuban political prisoner awarded the U.S. Presidential Medal of Freedom by President Bush.)

The list of back-stabbed and outraged Cuban dissidents is much, much longer.

At any rate, Cuba’s post-Soviet sugar-daddy (Venezuela) is currently in dire economic straits from the precipitous plunge in the price of oil, Venezuela’s top export. Their economic lifeline to the Castro regime looks shaky, hence the “Here I come to save the day!” by President Obama.

But let’s face it. Castro’s Stalinist regime has jailed, tortured and murdered tens of thousands (including some U.S. citizens) for over half a decade and most Americans don’t seem to give a flying flip. Fine. So let’s consult yet another Cuban dissident who actually serves up some red meat.  Let’s notify Joe Sixpack and Soccer Mom (who quite understandably find all this human-rights stuff regarding a foreign country utterly irrelevant) that maybe it’s time to pay closer attention to the issue:

“If the U.S. allows financing towards Cuba, it will be the U.S. taxpayers who would sustain the Castro regime. Since it has run out of doors to knock on [for credit], the Castro regime is now focused on the United States.” (Cuban dissident and three-time Amnesty-International prisoner of conscience Rene Gomez Manzanoin.)

Well, the U.S. Chamber of Commerce, the farm lobby, Council on Foreign Relations and Castro’s agents of influence (but I repeat myself) understandably avoid this issue like the plague, hence its invisibility in the mainstream media. So please listen up: For over a decade the so-called U.S. embargo, so disparaged by President Obama, has mostly stipulated that Castro’s Stalinist regime pay cash up front through a third-party bank for all U.S. agricultural products; no Ex-Im (U.S. taxpayer) financing of such sales. And that’s what infuriates Castro, and motivates his U.S. agents of influence.

Enacted by the Bush team in 2001, this cash-up-front policy has been monumentally beneficial to U.S. taxpayers, making them among the few in the world not rooked by the Castro regime, which per capita-wise qualifies as the world’s biggest debtor nation, with a foreign debt estimated at $50 billion, a credit rating nudging Somalia’s and an uninterrupted record of defaults. Standard & Poors refuses even to rate Cuba, regarding the economic figures released by its Stalinist apparatchiks as utterly bogus. Just this year the Russians wrote off almost $30 billion Castro still owed them.
Interesting that a Cuban dissident should plumb this matter more accurately than those “champions of the U.S. taxpayers,” Rand Paul and Jeff Flake, who loudly applauded President Obama’s Christmas present to Castro this week. From the White House “Fact Sheet; Charting a New Course on Cuba”:

* U.S. institutions will be permitted to open correspondent accounts at Cuban financial institutions to facilitate the processing of authorized transactions.

* The regulatory definition of the statutory term “cash in advance” will be revised to specify that it means “cash before transfer of title”; this will provide more efficient financing of authorized trade with Cuba.

Whoops! Though still a bit sketchy, it certainly sounds like we’re moving in the direction Rene Gomez warned against. This matter was recently explained in more detail by a Townhall columnist on Canada’s SunNews network.

In 1957 when Cuba was a “U.S. economic colony,” as we’re constantly told by the media (though U.S. investments in Cuba accounted for only 14 per cent the island’s GNP), the U.S. exported $347.5 million worth of goods to Cuba.

In 2013 (when Cuba was being “strangled by a U.S. economic blockade,” was we’re constantly told by the media) the U.S. exported $457.3 million to Cuba. In fact for every year Obama has been in office the “Cuba-embargoing” U.S. has exported more goods to Cuba than it did in 1957.
In 1957 (when Cuba was a “playground for U.S. tourists,” as we’re constantly told by the media) 263,000 people visited Cuba from the U.S

In 2013 (when Cuba was being diabolically “blockaded” by the U.S., according to the media) an estimated 500,000 people visited Cuba from the U.S.  So under Obama twice as many people are visiting Cuba as in the golden 1950s.

In 1958 with Cuba under a “U.S.-backed dictator,” with the U.S. “controlling Cuba’s economy,” (according to the media, though in fact, U.S. companies employed 7 percent of Cuba’s workforce) the staff of the U.S. embassy in Cuba numbered 87, including Cuban employees.

Today with supposedly no diplomatic relations with Cuba (according to the media) the staff of the U.S. Interest Section in Havana numbers 351, including Cuban employees. In fact, for well over a decade the U.S. has hadtwice as many diplomatic personnel in Havana as Canada and Mexico combined. In the Twilight Zone occupied by the U.S. media this is termed “diplomatic isolation.”

In executive order after executive order, President Obama has already abolished President Bush’s travel and remittance restrictions to Castro’s terror-sponsoring fiefdom and opened the pipeline to a point where the cash-flow from the U.S. to Cuba last year was estimated at $4 billion a year.

While a proud Soviet satrapy Cuba received $3-5 billion annually from the Soviets. In brief, almost every year since Obama took office more cash has been flowing from the U.S. to Cuba than used to flow there from the Soviets at the height of their Cuba-sponsorship. In the Twilight Zone occupied by the mainstream media this is known as an “economic embargo.”

In sum, the proof is long in: record tourism and foreign investment into Cuba = record repression for the Cuban people. Every shred of observable evidence proves that travel to Cuba and business with its Stalinist mafia enriches and entrenches these KGB-trained and heavily-armed owners of Cuba’s economy. Thus they remain the most highly motivated guardians of Cuba’s Stalinist and Terror-Sponsoring status-quo.

This week they’re all toasting Obama, snickering and rubbing their hands. So grab your wallets, amigos.

URL to article: http://www.frontpagemag.com/2014/humberto-fontova/obama-comes-to-castros-rescue/
Posted by jtf at 10:03 AM