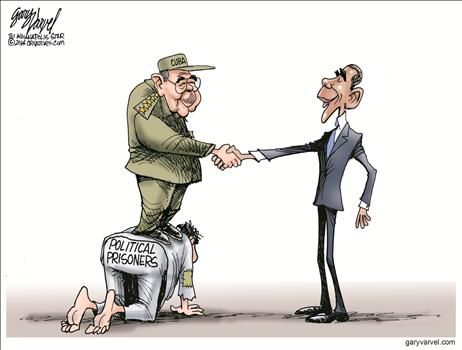 Say this much for the Castro regime: they’re not making even the slightest pretense that their deal with Barack Obama was anything but total and complete American capitulation.  It’s a wonder they didn’t tell Obama to attend a formal surrender ceremony.  He might have been willing to do it.  He did apologize to the Castro killers for how long it took America to knuckle under, then sat obediently while Raul Castro prattled at him for half an hour.
To drive home the point about how they’ll never change, and are giving Obama exactly squat in exchange for his lavish concessions, the Castro regime proceeded to run down a boat full of refugees, many of them children, and drag the survivors back to Obama’s favorite island gulag.  The Miami Herald brings us this heartwarming scene of how Obama’s plan to “open” Cuba and transform it with American values is coming along:

Masiel González Castellano told reporters in a telephone conversation from Matanzas, Cuba, that her husband, Leosbel Díaz Beoto, is missing after falling from the boat that was repeatedly charged and hit by a boat manned by the Cuban Coast Guard.
“We were screaming and crying for help as the boat was sinking. But they ignored us. Instead, they continued charging against our boat. Some people dove in the water and others stayed aboard as the boat sank,” said González, who was contacted during a press conference hosted in Miami by the Democracy Movement. “They knew there were children aboard, but continued to charge against us. They didn’t care.”
The boat, said González, was carrying 32 people, including seven women and two children. One of the two children was her 8-year-old son. She added that the boat pilot “was from Miami.”
The group, González said, boarded the boat at around 4 a.m. Monday. After being hit on Tuesday morning, the Cuban Coast Guard rescued most of the survivors, who were then locked up by the State Security in Versailles, Matanzas.
González said she was released on Thursday night with the rest of the women and children. The men remain under custody, she added.
According to Ramón Saúl Sánchez, president of Democracy Movement, the people on the boat said the incident occurred in international waters at about 22 miles from Cuban territory. “This is not the way to deal with people who are just trying to flee a brutal tyranny,” he said.

Actually, Mr. Sanchez, I think this is exactly how tyrants normally deal with people who flee from them.  Every form of collectivism, including American socialism, has to deal with the problem of disenchanted subjects seeking to escape from punitive regimes.  We have Democrats fidgeting about capital flight through corporate inversions; Cuba mows down women and children attempting to float to freedom on improvised rafts.  In every left-wing regime, there must be walls, moats, and consequences for those who try to cross them in the wrong direction.  I can remember a time when the United States sank pirates who attacked unarmed vessels in international waters, but I guess those days are long behind us.
Some Republicans have been urging Obama to get something from the Castro regime in exchange for the billions of American dollars he’s planning to pour into their coffers.  New Jersey Governor Chris Christie, for example, nudged his 2016 presidential steed a bit closer to the starting gate by telling Obama to demand the return of fugitive cop killer Joanne Chesimard, a Black Liberation Army “activist” who murdered a New Jersey state trooper, ended up on the FBI’s Most Wanted List, and found asylum in the welcoming arms of Obama’s new Partners in Peace.  This would be an excellent time for President Obama to take a strong stand against cop killers, wouldn’t it?  Nevertheless, I doubt Christie’s going to have much luck getting Obama to play along – as the Governor noted, it’s significant that Obama didn’t make this demand on his own initiative, and he probably won’t risk humiliation at the hands of the Castros by making it now.
This whole idea of exposure to American capitalism and democracy inspiring Cuba to embrace freedom is ridiculously naive.  I strongly doubt Barack Obama himself thinks such a transformation is in the cards – he’s looking for a way to inspire his base with a salute to the academic Left’s legendary hero Fidel, and score a quick foreign-policy “win” his media lapdogs can bark about.  For one thing, Cuba has already been exposed to plenty of capitalism and democracy from the many countries that didn’t maintain an embargo against it, such as Canada.  The spectacle of American liberals pretending Canada is an inferior standard-bearer of freedom is momentarily amusing, but seriously, there’s ample evidence that Cuba’s interaction with less hideous cultures has not broken the Castros’ iron grip on their private dungeon state.  American money isn’t going to have much of a transformative effect when the regime is grabbing 92 cents out of every dollar.
What Obama has done, when you get right down to it, is endorse slavery.  The Cuban people are slaves to the Castro regime, which provides accommodations staffed by indentured labor to well-heeled foreign visitors.  I don’t think any American liberal would have trouble understanding the situation if we were talking about some evil capitalist overlord running a posh resort attended by captive workers who get run down by men with guns when they try to escape, and are allowed to keep 8 cents of every dollar they earn to cover whatever necessities of life the Master chose not to provide.  But if you write such an atrocity large enough, and give the Master a generation or two of academic cheerleaders who gobble up his left-wing rhetoric… well, compulsory servitude suddenly becomes quite palatable to people who still think America should be punished for the slavery it fought a bloody war to end 150 years ago.
Posted by jtf at 8:31 AM