Emails released this week sweep the Federal Election Commission into the conservative-targeting probe.

By Kimberly A. Strassel
http://online.wsj.com
August 1, 2013
Congressional investigators this week released emails suggesting that staff at the Federal Election Commission have been engaged in their own conservative targeting, with help from the IRS's infamous Lois Lerner. This means more than just an expansion of the probe to the FEC. It's a new link to the Obama team.
In May this column noted that the targeting of conservatives started in 2008, when liberals began a coordinated campaign of siccing the federal government on political opponents. The Obama campaign helped pioneer this tactic.
In late summer of 2008, Obama lawyer Bob Bauer took issue with ads run against his boss by a 501(c)(4) conservative outfit called American Issues Project. Mr. Bauer filed a complaint with the FEC, called on the criminal division of the Justice Department to prosecute AIP, and demanded to see documents the group had filed with the IRS.
Thanks to Congress's newly released emails, we now know that FEC attorneys went to Ms. Lerner to pry out information about AIP—the organization the Obama campaign wanted targeted. An email from Feb. 3, 2009, shows an FEC attorney asking Ms. Lerner "whether the IRS had issued an exemption letter" to AIP, and requesting that she share "any information" on the group. Nine minutes after Ms. Lerner received this FEC email, she directed IRS attorneys to fulfill the request.
Enlarge Image 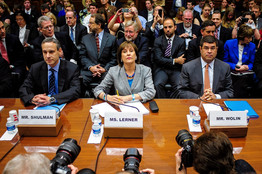 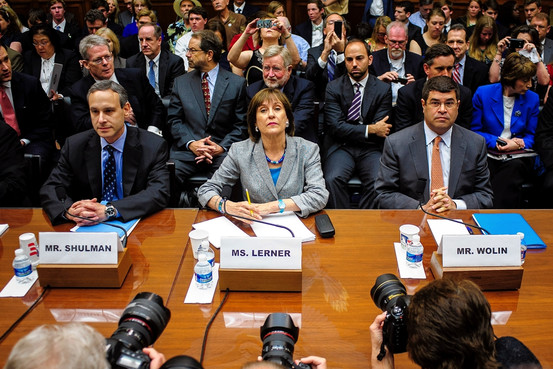 Bloomberg
Douglas Shulman, former IRS commissioner (left), Lois Lerner, the then-director of the IRS's exempt-organizations office, and Neal Wolin, deputy secretary of the Treasury, at a congressional hearing, May 22.
This matters because FEC staff didn't have permission from the Commission to conduct this inquiry. It matters because the IRS is prohibited from sharing confidential information, even with the FEC. What the IRS divulged is unclear. Congressional investigators are demanding to see all communications between the IRS and FEC since 2008, and given that Ms. Lerner came out of the FEC's office of the general counsel, that correspondence could prove illuminating.
It also matters because we now know FEC staff engaged in a multiyear effort to deliver to the Obama campaign its win against AIP. This past week, FEC Vice Chairman Don McGahn, joined by his two fellow Republican commissioners, wrote an extraordinary statement recounting the staff's behavior in the case.
When the FEC receives a complaint, it falls to the general counsel's office to first issue a report on the merits of the alleged campaign violations. The six-person commission then votes on whether there is a "reason to believe" a violation occurred. No formal investigations are to take place before that point.
The Obama team's complaint broadly claimed AIP was masquerading as a nonprofit, when it should have registered as a highly regulated political action committee. It was a ludicrous claim (see below), yet the FEC staff issued a report in April 2009 recommending the commission go after AIP, not long after its attorneys had been in touch with Ms. Lerner.
When the Supreme Court's 2010 ruling in Citizens United v. FEC made most of the Obama complaint irrelevant, the staff withdrew its first report, then took 18 months to come up with a second rationale for why the commission should pursue AIP. All this time, FEC staff—Mr. McGahn recounts—were conducting an unauthorized investigation into AIP. The staff was also improperly withholding the results of its research from AIP.
When new issues made its second attempt moot, the general counsel's office went after the group with a third report. AIP's defense all along was that it spent the majority of its money from 2007 to 2010 on its "major" organizational "purpose" of educating and informing the public of conservative principles, and only a minority (less than one-third) on direct campaign expenditures. As such, it easily meets the tests for being a 501(c)(4).
And so the FEC staff's third report presented a novel theory. The staff argued that AIP ought to be judged on what it spent per "calendar year." By shortening the timeline, and looking only at AIP's spending in 2008—an election year—the staff argued AIP had violated campaign law.
The Republican commissioners were appalled, noting that FEC staff had always taken a multiyear view of expenditures, including when it came to cases against liberal groups, like the League of Conservation Voters or the Moveon.org Voter Fund. The FEC staff also sought to impose this new standard after the fact, with no notice to election players and no input from the commissioners.
Vice Chairman McGahn's statement is scathing. "Here," he writes, FEC staff "could be seen as manipulating the timeline to reach the conclusion that AIP is a political committee. . . . Such after-the-fact determinations create the appearance of impropriety, whether or not such impropriety exists."
The broader AIP case is, in fact, beyond improper. It's fishy. The Obama campaign takes its vendetta against a political opponent to the FEC. The FEC staff, as part of an extraordinary campaign to bring down AIP and other 501(c)(4) groups, reaches out to Lois Lerner, the woman overseeing IRS targeting. Mr. McGahn has also noted that FEC staff has in recent years had an improperly tight relationship with the Justice Department—to which the Obama campaign also complained about AIP.
Democrats are increasingly desperate to suggest that the IRS scandal was the work of a few rogue agents. With the stink spreading to new parts of the federal government, that's getting harder to do.
Write to kim@wsj.com


A version of this article appeared August 2, 2013, on page A11 in the U.S. edition of The Wall Street Journal, with the headline: New Links Emerge in the IRS Scandal.
Posted by jtf at 9:40 PM