How America Lost Its Way

It is getting ever harder to do business in the United States, argues Niall Ferguson, and more stimulus won't help: Our institutions need fixing. 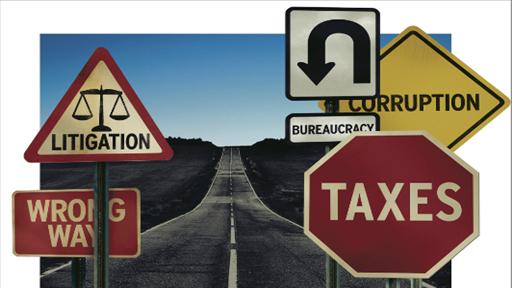 The decline of America's institutions, and the related rise in red tape that hinders business, may spell the nation's economic doom. Harvard's Niall Ferguson talks to WSJ's Charles Forelle about the theory outlined in his new book "The Great Degeneration."
Not everyone is an entrepreneur. Still, everyone should try—if only once—to start a business. After all, it is small and medium enterprises that are the key to job creation. There is also something uniquely educational about sitting at the desk where the buck stops, in a dreary office you've just rented, working day and night with a handful of employees just to break even.
As an academic, I'm just an amateur capitalist. Still, over the past 15 years I've started small ventures in both the U.S. and the U.K. In the process I've learned something surprising: It's much easier to do in the U.K. There seemed to be much more regulation in the U.S., not least the headache of sorting out health insurance for my few employees. And there were certainly more billable hours from lawyers.

Sources: 'Doing Business'; World Economic Forum; Fraser Institute
This set me thinking. We are assured by vociferous economists that economic growth would be higher in the U.S. and unemployment lower if only the government would run even bigger deficits and/or the Fed would print even more money. But what if the difficulty lies elsewhere, in problems that no amount of fiscal or monetary stimulus can overcome?
Nearly all development economists agree that good institutions—legislatures, courts, administrative agencies—are crucial. When poor countries improve their institutions, economic growth soon accelerates. But what about rich countries? If poor countries can get rich by improving their institutions, is it not possible that rich countries can get poor by allowing their institutions to degenerate? I want to suggest that it is.
Consider the evidence from the annual "Doing Business" reports from the World Bank and International Finance Corporation. Since 2006 the report has published data for most of the world's countries on the total number of days it takes to start a business, get a construction permit, register a property, pay taxes, get an export or import license and enforce a contract. If one simply adds together the total number of days it would take to carry out all seven of these procedures sequentially, it is possible to construct a simple measure of how slowly—or fast—a country's bureaucracy moves.
Seven years of data suggest that most of the world's countries are successfully making it easier to do business: The total number of days it takes to carry out the seven procedures has come down, in some cases very substantially. In only around 20 countries has the total duration of dealing with "red tape" gone up. The sixth-worst case is none other than the U.S., where the total number of days has increased by 18% to 433. Other members of the bottom 10, using this metric, are Zimbabwe, Burundi and Yemen (though their absolute numbers are of course much higher).
Why is it getting harder to do business in America? Part of the answer is excessively complex legislation. A prime example is the 848-page Wall Street Reform and Consumer Protection Act of July 2010 (otherwise known as the Dodd-Frank Act), which, among other things, required that regulators create 243 rules, conduct 67 studies and issue 22 periodic reports. Comparable in its complexity is the Patient Protection and Affordable Care Act (906 pages), which is also in the process of spawning thousands of pages of regulation. You don't have to be opposed to tighter financial regulation or universal health care to recognize that something is wrong with laws so elaborate that almost no one affected has the time or the will to read them.
Enlarge Image 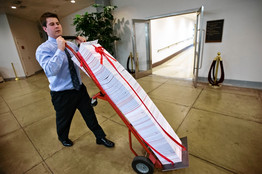 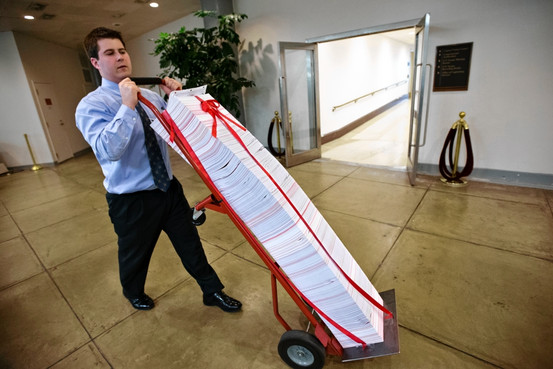 Associated Press
NOW READ THIS: A Senate aide pushes a stack of documents bound in red tape. They were used as a prop during a debate on the budget on March 22.
Who benefits from the growth of complex and cumbersome regulation? The answer is: lawyers, not forgetting lobbyists and compliance departments. For complexity is not the friend of the little man. It is the friend of the deep pocket. It is the friend of cronyism.
We used to have the rule of law. Now it is tempting to say we have the rule of lawyers, which is something different. For the lawyers can also make money even in the absence of complex legislation.
It has long been recognized that the U.S. tort system is exceptionally expensive. Indeed, tort reform is something few people will openly argue against. Yet the plague of class-action lawsuits continues unabated. Regular customers of Southwest Airlines LUV +2.81% recently received this email: "Did you receive a Southwest Airlines drink coupon through the purchase of a Business Select ticket prior to August 1, 2010, and never redeem it? If yes, a legal Settlement provides a Replacement Drink Voucher, entitling you to a free drink aboard a Southwest flight, for every such drink coupon you did not redeem."
This is not the product of the imagination of some modern-day Charles Dickens. It is a document arising from the class-action case, In re Southwest Airlines Voucher Litigation, No. 11-cv-8176, which came before Judge Matthew F. Kennelly of the District Court for the Northern District of Illinois. As the circular explains: "This Action arose out of Southwest's decision, effective August 1, 2010, to only accept drink coupons received by Business Select customers with the purchase of a Business Select ticket on the date of the ticketed travel. The Plaintiffs in this case allege Southwest, in making that decision, breached its contract with Class Members who previously received drink coupons," etc.
As often happens in such cases, Southwest decided to settle out of court. Recipients of the email will have been nonplused to learn that the settlement "will provide Replacement Drink Vouchers to Class Members who submit timely and valid Claim Forms." One wonders how many have bothered.


A version of this article appeared June 8, 2013, on page C1 in the U.S. edition of The Wall Street Journal, with the headline: How America Lost Its Way.
Posted by jtf at 7:21 AM