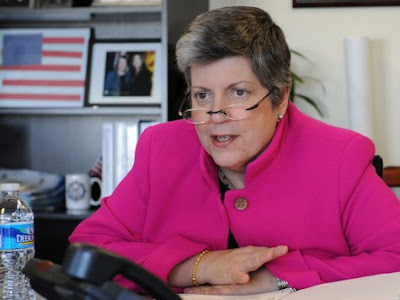 Janet Napolitano, Head of the Department of Homeland Security

When a band of knights encounter a murderous rabbit in the movie Monty Python and the Holy Grail, their immediate response is to hurriedly flee the carnage, screaming in unison, “Run away! Run away!”

Now in a case of life imitating comedic art, the Obama administration is instructing Border Patrol agents to “run away and hide” when confronted by an “active shooter,” an armed individual opening fire in public places.

The new “run-and-hide” directive for agents in US Customs and Border Protection (CBP) was issued by the Department of Homeland Security (DHS) in the form of a mandatory computer training course on the proper protocol to be used when confronted by active shooters.

That appropriate conduct, outlined in an hour-long video entitled “IS-907- Active Shooter: What You Can Do,” consists of three specific options available to Border Patrol agents: Evacuate, Hide Out, and, if that fails, Take Action.

Unfortunately, the DHS definition of “taking action,” according to Border Patrol union officials, is to “act aggressively and throw things at the shooter,” a plan that could prove unworkable given that the DHS did not specify what thrown objects would prove adequate in stopping a hail of gunfire.
Nevertheless, if the gunman is not subdued by an avalanche of tossed shoes, belts, or badges, the DHS then advise the Border Patrol agents to “call law enforcement and wait for their arrival,” a somewhat puzzling directive given those Border Patrol agents are under the impression they themselves are armed law enforcement professionals.

After all, these Border Patrol agents spend 12 weeks training at the Federal Law Enforcement Training Center (FLETC) in New Mexico, where they are instructed in such things as criminal law, immigration law, arrest techniques, self defense, and firearms.

Yet, despite being assigned upon graduation from FLETC a semi-automatic pistol, a fully automatic assault rifle or a shotgun to carry out their duties, the Obama administration apparently believes them insufficiently prepared to utilize those weapons and that training in taking down a crazed gunman firing on innocent civilians.

That downgraded assessment of their abilities comes despite Border Patrol agents — in addition to tracking groups of illegal aliens coming into the United States — being responsible for apprehending heavily armed Mexican drug cartel members operating along the US-Mexico border.

Not surprisingly, then, the DHS “run away” policy is not sitting well within the rank and file of the Border Patrol, including the country’s largest Border Patrol union with 3,300 members, Local 2544 in Tucson, Arizona.

In statements posted on their union website, union leaders have characterized the DHS guidelines as “downright insulting,” adding, “It’s nice to know if we should encounter such a situation, stop a shooter and save countless lives, we can look forward to being disciplined or fired by the Border Patrol because we should have run away to hide.”

As one former law enforcement investigator and current security consultant wondered, perhaps rhetorically, “Are the lunatics now running the asylum?”

Of course, the Obama administration’s diminished view of the role played by Border Patrol agents neatly dovetails with its overall disinterest in promoting the US Customs and Border Protection agency’s role in securing the nation’s borders.

That disinterest was most recently on display with the Obama administration’s announcement that it is moving to close nine Border Patrol stations across four states.

While the CBP has maintained closing the stations is being done in order to reassign agents to higher priority areas closer to the border, critics warn the closures will undermine efforts to intercept drug and human traffickers in well-traveled corridors north of the US-Mexico border.

As Bob Dane, communications director with the Federation for American Immigration Reform has said, the Border Patrol station closings are just “part of the systematic dismantling of both border and interior enforcement. It complements the non-enforcement policy of (the Obama) administration.”

The non-enforcement immigration policy of the Obama administration was witnessed most recently by President Obama’s executive order to stop the deportation of over 800,000 young illegal aliens; and his directive to Immigration and Customs Enforcement to “selectively enforce” the parts of Arizona’s immigration enforcement law, SB 1070, that were recently upheld by the Supreme Court.

Yet, as fully committed as the Obama administration is to not enforcing the country’s immigration laws, it is equally committed to making life a more pleasurable experience for those who find themselves in the country illegally.

To that end, in this year alone, the Department of Homeland Security announced the appointment of the nation’s first “public advocate” for Immigration and Customs Enforcement; and its revised standards for treating illegal aliens housed in the country’s detention facilities, changes which included providing taxpayer-funded access to “hormone therapy” for transgendered detainees.

So, given the Obama administration’s desperate desire to run away from America’s illegal immigration problem, it makes sense that it would now instruct America’s Border Patrol agents to run away from their professional responsibilities of protecting public safety.

Yet, while the DHS “flee to safety” policy may provoke a mixture of derision and amusement, it should be noted that a variation of this policy has already been in effect, one that resulted in the death of Border Patrol agent Brian Terry, the centerpiece of the Fast and Furious operation.

Specifically, the Justice Department recently revealed that Terry and a contingent of federal agents initially fired bean bags — not bullets — at a group of heavily armed drug cartel members south of Tucson, Arizona, in December 2011, an exchange in which Terry was shot and killed.

That information, which came in a statement issued by Attorney General Eric Holder, also read, “Agent Terry served his country honorably and made the ultimate sacrifice in trying to protect it from harm.”

Unfortunately, Terry’s heroic effort to protect his country was delivered in the form of a bean bag, a “weapon” that the Department of Homeland Security would undoubtedly find a suitable standard issue for all Border Patrol agents.