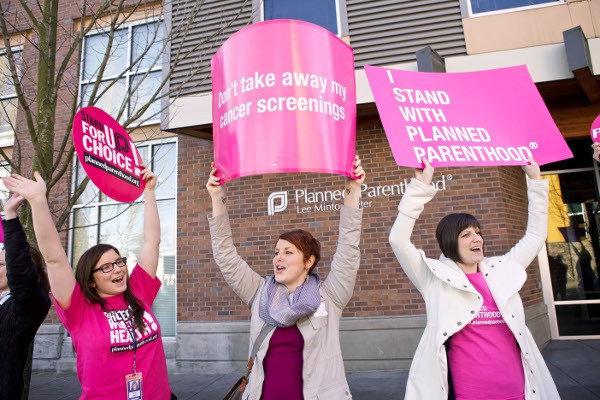 
Planned Parenthood would appear to have won this latest skirmish in the abortion wars. The Susan G. Komen for the Cure foundation having first decided to withdraw future grants to the world's largest abortion provider, quickly retreated under a barrage of accusations, complaints and threats.

No fewer than 26 Democratic senators signed a letter to Komen saying, in part that, "It would be tragic if any woman --let alone thousands of women -- lost access to these potentially life-saving screenings because of a politically motivated attack. We earnestly hope that you will put women's health before partisan politics and reconsider this decision . . ."

Intoning that, "Politics have no place in health care," New York Mayor Michael Bloomberg made a $250,000 matching grant to Planned Parenthood. Ever alert to the politically correct posture on everything, Bloomberg added, "Breast cancer screening saves lives, and hundreds of thousands of women rely on Planned Parenthood for access to care."

But the real firepower came from the press and the Internet. NBCs Andrea Mitchell bore down on Nancy Brinker, the foundation's founder, pressing her to admit that women's health would suffer as a result of the Komen board's decision. The decision was "all about politics," reported the Washington Post, and the Los Angeles Times editorialized that for "a long time Komen's name will be connected more with ugly politics than with pink ribbons."

The foundation caved under the pressure with all of the groveling its opponents could have wished for. "We want to apologize to the American public," said the group's press release "for recent decisions that cast doubt upon our commitment to our mission of saving women's lives . . ."

So, all together now, Planned Parenthood is all about saving women's lives, and any criticism of PP is "ugly politics."

Except that observers of events over the past week may draw other conclusions. They may notice that any criticism -- even implied criticism -- of PP leads to a full-dress onslaught by the liberal echo chamber. And they may detect a certain over eagerness on the part of PP to downplay their abortion work.

The Susan G. Komen decision elicited such a heated response because it threatened to remove the "women's health" fig leaf from PP. By now, everyone has learned that PP, its own claims notwithstanding, does not provide mammograms. It provides referrals for mammograms. Considering that about 80 percent of PP clients are under the age of 35, and only 5 percent of breast cancers are found in women under the age of 40, it is unlikely that PPs manual breast exams and referrals for further screening are medically significant. Mayor Bloomberg could surely find better recipients for breast cancer screening contributions.

Throughout the Komen imbroglio, PP circulated another misleading statistic -- that only 3 percent of PPs services involve abortions. As Charlotte Allen revealed in a 2007 Weekly Standard essay, that figure is, well, inventive. They arrive at that number by counting every service individually. When a client comes in for an abortion, she gets a pregnancy test (one service), a pelvic exam (second service), an STD test (third service), a breast exam (fourth service), a package of contraceptives (fifth service) and so forth. But calculated as a percentage of revenue generated, abortion accounts for about a third of PPs business.

And 1 of out 3 clients who walks into a PP clinic is there for a pregnancy test. A third of those go on to have abortions.

Charlotte Allen drew attention to something else PP wants to obscure -- its dedication to providing confidential abortions, even to very young girls, which may be enabling statutory rape. A 14-year-old Cincinnati girl who was impregnated by her 21-year-old soccer coach was brought to a PP clinic by the coach. He paid for the abortion with his credit card. PP asked no questions.

Pro-life activist Lila Rose posed as a pregnant 15-year-old (she was a college student at the time) having a relationship with a 23-year-old. Together they visited two PP clinics in California pretending to seek an abortion. No employee expressed concern at the ages of the young people, though a PP employee in Santa Monica advised Rose to "pick a birthday that works" so that the clinic would not have to report them to the police.

That's why the initial Komen decision was so potentially damaging and elicited such a furious response. Those mammogram referrals are window dressing for a business with plenty to hide.

- Mona Charen is a syndicated columnist, political analyst and author of Do-Gooders: How Liberals Hurt Those They Claim to Help .
Posted by jtf at 9:38 AM