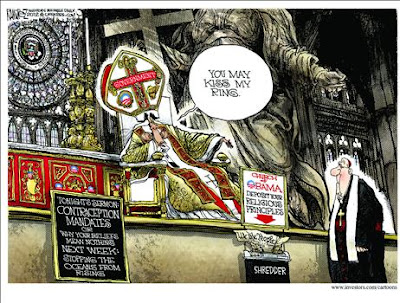 In politics, the timing is often the message. On Jan. 20 — three days before the annual March for Life — the Obama administration announced its final decision that Catholic universities, hospitals and charities will be compelled to pay for health insurance that covers sterilization, contraceptives and abortifacients.

Preparing for the march, Catholic students gathered for Mass at Verizon Center. The faithful held vigil at the National Shrine of the Immaculate Conception. Knights of Columbus and bishops arrived to trudge in the cold along the Mall. All came to Washington in time for their mocking.

Catholic leaders are still trying to process the implications of this ambush. The president had every opportunity to back down from confrontation. In the recent ­Hosanna-Tabor ruling, a unanimous Supreme Court reaffirmed a broad religious autonomy right rooted in the Constitution. Obama could have taken the decision as justification for retreat.

And it would have been a minor retreat. The administration was on the verge of mandating nearly universal contraceptive coverage through Obamacare without public notice. There would have been no controversy at all if President Obama had simply exempted religious institutions and ministries. But the administration insisted that the University of Notre Dame and St. Mary’s Hospital be forced to pay for the privilege of violating their convictions.

Obama chose to substantially burden a religious belief, by the most intrusive means, for a less-than-compelling state purpose — a marginal increase in access to contraceptives that are easily available elsewhere. The religious exemption granted by Obamacare is narrower than anywhere else in federal law — essentially covering the delivery of homilies and the distribution of sacraments. Serving the poor and healing the sick are regarded as secular pursuits — a determination that would have surprised Christianity’s founder.

Both radicalism and maliciousness are at work in Obama’s decision — an edict delivered with a sneer. It is the most transparently anti-Catholic maneuver by the federal government since the Blaine Amendment was proposed in 1875 — a measure designed to diminish public tolerance of Romanism, then regarded as foreign, authoritarian and illiberal. Modern liberalism has progressed to the point of adopting the attitudes and methods of 19th-century Republican nativists.

The implications of Obama’s choice will take years to sort through. The immediate impact can be measured on three men:

Consider Catholicism’s most prominent academic leader, the Rev. John Jenkins, president of Notre Dame. Jenkins took a serious risk in sponsoring Obama’s 2009 honorary degree and commencement address — which promised a “sensible” approach to the conscience clause. Jenkins now complains, “This is not the kind of ‘sensible’ approach the president had in mind when he spoke here.” Obama has made Jenkins — and other progressive Catholic allies — look easily duped.

Consider Catholicism’s highest-ranking elected official, Vice President Biden. Biden had encouraged engagement with the U.S. Conference of Catholic Bishops on conscience rights. Now he will be remembered as the Catholic cover for the violation of Catholic conscience. Betrayal is always an inside job.

Consider Catholicism’s most prominent clerical leader, Cardinal-designate Timothy Dolan, head of the Conference of Catholic Bishops. Dolan had pursued a policy of engagement with the administration. In November, he met face to face with Obama, who was earnestly reassuring on conscience protections. On Jan. 20, during a less-cordial phone conversation, Obama informed Dolan that no substantial concession had been made. How can Dolan make the argument for engagement now?

The implications of Obama’s power grab go further than contraception and will provoke opposition beyond Catholicism. Christian colleges and universities of various denominations will resist providing insurance coverage for abortifacients. And the astounding ambition of this federal precedent will soon be apparent to every religious institution. Obama is claiming the executive authority to determine which missions of believers are religious and which are not — and then to aggressively regulate institutions the government declares to be secular. It is a view of religious liberty so narrow and privatized that it barely covers the space between a believer’s ears.

Obama’s decision also reflects a certain view of liberalism. Classical liberalism was concerned with the freedom to hold and practice beliefs at odds with a public consensus. Modern liberalism uses the power of the state to impose liberal values on institutions it regards as backward. It is the difference between pluralism and anti-­clericalism.

The administration’s ultimate motivation is uncertain. Has it adopted a radical secularism out of conviction, or is it cynically appealing to radical secularists? In either case, the war on religion is now formally declared.

michaelgerson@washpost.com
Posted by jtf at 6:48 AM