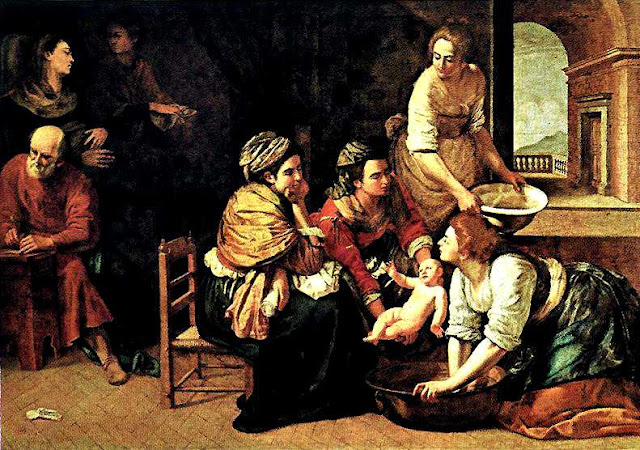 Our lesson for today comes from the Gospel according to Luke. No, no, not the manger, the shepherds, the wise men, any of that stuff, but the other birth:

"But the angel said unto him, Fear not, Zacharias: for thy prayer is heard; and thy wife Elisabeth shall bear thee a son, and thou shalt call his name John."

That bit of the Christmas story doesn't get a lot of attention, but it's in there – Luke 1:13, part of what he'd have called the back story, if he'd been a Hollywood screenwriter rather than a physician. Of the four gospels, only two bother with the tale of Christ's birth, and only Luke begins with the tale of two pregnancies. Zacharias is surprised by his impending paternity – "for I am an old man and my wife well stricken in years." Nonetheless, an aged, barren woman conceives and, in the sixth month of Elisabeth's pregnancy, the angel visits her cousin Mary and tells her that she, too, will conceive. If you read Luke, the virgin birth seems a logical extension of the earlier miracle – the pregnancy of an elderly lady. The physician-author had no difficulty accepting both. For Matthew, Jesus' birth is the miracle; Luke leaves you with the impression that all birth – all life – is to a degree miraculous and God-given.

We now live in Elisabeth's world – not just because technology has caught up with the deity and enabled women in their fifties and sixties to become mothers, but in a more basic sense. The problem with the advanced West is not that it's broke but that it's old and barren. Which explains why it's broke. Take Greece, which has now become the most convenient shorthand for sovereign insolvency – "America's heading for the same fate as Greece if we don't change course," etc. So Greece has a spending problem, a revenue problem, something along those lines, right? At a superficial level, yes. But the underlying issue is more primal: It has one of the lowest fertility rates on the planet. In Greece, 100 grandparents have 42 grandchildren – i.e., the family tree is upside down. In a social democratic state where workers in "hazardous" professions (such as, er, hairdressing) retire at 50, there aren't enough young people around to pay for your three-decade retirement. And there are unlikely ever to be again.

Look at it another way: Banks are a mechanism by which old people with capital lend to young people with energy and ideas. The Western world has now inverted the concept. If 100 geezers run up a bazillion dollars' worth of debt, is it likely that 42 youngsters will ever be able to pay it off? As Angela Merkel pointed out in 2009, for Germany an Obama-sized stimulus was out of the question simply because its foreign creditors know there are not enough young Germans around ever to repay it. The Continent's economic "powerhouse" has the highest proportion of childless women in Europe: one in three fräulein have checked out of the motherhood business entirely. "Germany's working-age population is likely to decrease 30 percent over the next few decades," says Steffen Kröhnert of the Berlin Institute for Population Development. "Rural areas will see a massive population decline, and some villages will simply disappear."

If the problem with socialism is, as Mrs. Thatcher says, that eventually you run out of other people's money, much of the West has advanced to the next stage: it's run out of other people, period. Greece is a land of ever-fewer customers and fewer workers but ever more retirees and more government. How do you grow your economy in an ever-shrinking market? The developed world, like Elisabeth, is barren. Collectively barren, I hasten to add. Individually, it's made up of millions of fertile women, who voluntarily opt for no children at all or one designer kid at 39. In Italy, the home of the Church, the birthrate's somewhere around 1.2, 1.3 children per couple – or about half "replacement rate." Japan, Germany and Russia are already in net population decline. Fifty percent of Japanese women born in the Seventies are childless. Between 1990 and 2000, the percentage of Spanish women childless at the age of 30 almost doubled, from just over 30 percent to just shy of 60 percent. In Sweden, Finland, Austria, Switzerland, the Netherlands and the United Kingdom, 20 percent of 40-year old women are childless. In a recent poll, invited to state the "ideal" number of children, 16.6 percent of Germans answered "None." We are living in Zacharias and Elisabeth's world – by choice.

America is not in as perilous a situation as Europe – yet. But its rendezvous with fiscal apocalypse also has demographic roots: The baby boomers did not have enough children to maintain the solvency of mid-20th century welfare systems premised on mid-20th century birthrates. The "Me Decade" turned into a Me Quarter-Century, and beyond. The "me"s are all getting a bit long in the tooth, but they never figured there might come a time when they'd need a few more "thems" still paying into the treasury.

The notion of life as a self-growth experience is more radical than it sounds. For most of human history, functioning societies have honored the long run: It's why millions of people have children, build houses, plant trees, start businesses, make wills, put up beautiful churches in ordinary villages, fight and, if necessary, die for your country. A nation, a society, a community is a compact between past, present and future, in which the citizens, in Tom Wolfe's words at the dawn of the "Me Decade," "conceive of themselves, however unconsciously, as part of a great biological stream."

If you believe in God, the utilitarian argument for religion will seem insufficient and reductive: "These are useful narratives we tell ourselves," as I once heard a wimpy Congregational pastor explain her position on the Bible. But, if Christianity is merely a "useful" story, it's a perfectly constructed one, beginning with the decision to establish Christ's divinity in the miracle of His birth. The hyper-rationalists ought at least to be able to understand that post-Christian "rationalism" has delivered much of Christendom to an utterly irrational business model: a pyramid scheme built on an upside-down pyramid. Luke, a man of faith and a man of science, could have seen where that leads. Like the song says, Merry Christmas, baby.