Margaret Sanger and the War on Compassion

A new book attempts to airbrush a eugenicist’s sins from history.

‘The movement she started will grow to be, a hundred years from now, the most influential of all time in controlling man’s destiny on earth.”

The famed novelist H. G. Wells once praised a prominent woman thus. Such a powerful statement brings certain questions to mind. Who was this woman? What did she do that so deeply affected society? And did she influence the world for the good?

The woman to whom Wells was referring was Margaret Sanger, founder of Planned Parenthood, and he was speaking at a dinner celebrating the release of her book My Fight for Birth Control. The dinner took place in the midst of the Great Depression and, though a full century has not yet passed since then, debate remains heated over the sort of influence that Mrs. Sanger has had, and continues to have, on the world. Many see Margaret Sanger as an iconic feminist leader who helped pave the way for the freedoms of the modern woman. Others see a darker side to her legacy that more closely resembles the contents of a frightening Wellsian, or even Huxleyan, novel. 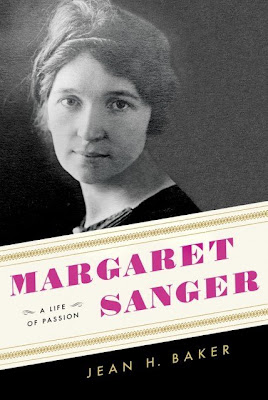 In a new biography, Margaret Sanger: A Life of Passion, Goucher College history professor Jean Baker claims not to be seeking Sanger’s sanctification and, indeed, she does not make her out to be a saint. Baker portrays Sanger as a woman who had a strong will to succeed at everything she set her mind to, and who indulged her every passion during a time of great restriction. Born on the wrong side of the tracks in Corning, N.Y., the young Margaret overcame a rough childhood to succeed in school and eventually become a nurse. She was already involved in socialist politics, and her work in nursing only spurred her activism.

In an oft-recounted (though unconfirmed) story, Sanger recalled being summoned to the apartment of a young woman named Sadie Sachs, who had attempted a self-abortion and almost killed herself in the process. When the woman begged the doctor for information on how to avoid pregnancy in the future, she was rebuffed. When Sanger was called back several months later after Sachs’s second abortion, it was too late to save her life. According to Sanger, it was then that she found her calling to birth control. She saw it as a crusade to free women from the bondage of unwanted motherhood, which she believed led to poverty, criminality, and a plethora of other social ills. Judging by the fact that birth control is now the accepted social norm and Planned Parenthood has grown to be a global birth-control and abortion giant, one would have to say that her lifelong crusade was ultimately successful.

But — is that all? Baker and other Sanger defenders steadfastly deny the dark undertones that many see in her words and her personal associations. Sanger had many famed eugenicists among her close friends and colleagues, and she worked closely for years with the American Eugenics Society. Baker asserts that “anti-choice” revisionists are seeking to distort Sanger’s views and that, in Sanger’s time, most of the American public supported eugenics. Baker writes that eugenics “promoted enlightened parenthood and raising healthy children.” Baker implies that eugenicism was far more positive in Sanger’s day and that, despite the thousands of forced sterilizations (which Sanger openly approved of and Sanger defenders tend to downplay), it was meant to improve heredity and society. Baker also implies that while there may have been some bad eugenicists, Sanger was a good one, intent on improving the lives of others. An earlier biographer, Ellen Chesler, suggests that Sanger “invited the support of powerful eugenicists, whose underlying assumptions were a good deal more offensive than her own.”

But the eugenicist thorn that persistently sticks in everyone’s side is Margaret Sanger herself. Ever the radical feminist, she insisted on speaking for herself, and, to this day, her words stand on their own.

“Restriction should be an order as well as an ideal of the family and the race,” she wrote. Greatly influenced by her friend and mentor the neo-Malthusian thinker Havelock Ellis (co-founder of Great Britain’s Eugenic Education Society), Sanger strongly believed in a “qualitative” not “quantitative” factor for the human race. There was an ideal for humanity, and those who failed to meet Sanger’s standards in terms of physical condition and mental capacity, and those prone to alcoholism or epilepsy, were less “fit” human beings and less worthy of the freedoms that she apparently held so dear. They were the “weeds” of the human garden, and they must be plucked. In her 1922 work, Pivot of Civilization, Sanger remarked that the state should respond with either “force or persuasion” when “the incurably defective are permitted to procreate.”

Most tellingly, perhaps, in her 1920 book, Woman and the New Race, Sanger referred to birth control as “nothing more or less than the facilitation of the process of weeding out the unfit, of preventing the birth of defectives, or those who would become defective.” Her great crusade for birth control was less about helping women and more about preventing the birth of those she deemed to be “unfit.”

Despite the insistence of her ardent supporters that Sanger was caught up in the common thought of her times, she was opposed by many contemporaries, who rejected such theories on the grounds both of faith and of American principles. She may have lived a life of passion, as Jean Baker asserts, but among her great passions was eugenics. It was one of the great legacies she sought to leave to the world.

In many ways, Sanger’s dream has been realized. For generations the sterilization of the poor and the vulnerable has been a reality pushed by government agencies and population-control groups. North Carolina is one of a number of states still debating reparations for victims of the state’s mandatory sterilization program from the mid-20th century. Currently, roughly 90 percent of unborn children diagnosed with Down Syndrome are aborted. Obsessed with plucking the “weeds” from the human garden, Sanger and her fellow eugenicists lost sight of what it means to be human.

In the end, Sanger’s passion waged war on compassion, redefining pregnancy as a battle zone for the survival of the fittest. It is a bleak doctrine, made all the more terrible because of the millions in public funds still being deployed to advance her eugenic struggle.

— Chuck Donovan is president and Nora Sullivan is a research assistant at the Charlotte Lozier Institute in Washington, D.C.
Posted by jtf at 8:12 AM

Email ThisBlogThis!Share to TwitterShare to FacebookShare to Pinterest
Labels: Abortion and Life Issues, Books and Things

From your artical i came to know that how to avoid or abort a pregnancy and contraceptive choives are always personal to individual's choice and comfort..