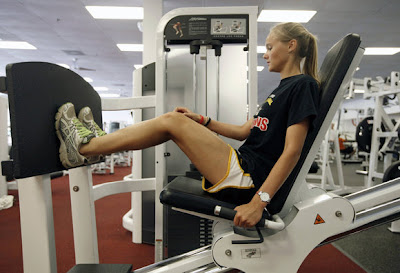 Kelsey Reeves knew lots of girls soccer players who had torn their anterior cruciate ligament. But she didn't think she had injured her own ACL as she lay on the ground in pain during a Leesville Road High game last spring. There was no contact, just one misstep.

"I had never been injured," she said. "Even after I was hurt, I didn't think it could be an ACL."

But Reeves' injury was typical of most ACL injuries. About 70 to 80 percent of ACL injuries come without any contact to the knee and females are much more likely to injure their ACL than males, according to Darin Padua, an associate professor and director of the Sports Medicine Research Laboratory at the University of North Carolina in Chapel Hill.

An ACL injury may be associated with big hits in football, but females are about eight times more likely to have an ACL tear. The injury is most common in girls soccer, girls volleyball and girls basketball.

The most recent numbers from the Centers for Disease Control and Prevention showed that in 2006, there were 46,000 females 19 and younger who had experienced a sprain or tear of the ACL. More than 30,000 required surgery. Numbers are not kept for contact vs. non-contact related knee injuries.

Injuries to the anterior cruciate ligament are especially dreaded by athletes. The ligament is one of four that helps connect the shin with the thigh and stabilizes the knee. The ligament, if torn, can be repaired, usually by taking a tendon from the hamstring or patella, but the rehabilitation process may take a year and is painful.

Some athletes recover almost completely, but for others, an ACL tear can end their competitive careers. After an ACL tear, an athlete is about eight times more likely to have another injury, either to the injured knee or the healthy one.

"It was much more than devastating. I still can't believe it happened to me," said Reeves, who plans to continue playing soccer.

But recent research indicates that non-contact ACL injuries can be significantly reduced by identifying athletes who are most susceptible to knee ligament injury and training them to move in a different way.

"We think we can dramatically reduce the number of ACL injuries," Padua said.

"It does matter how you move," he said.

Padua and his team at UNC have developed a series of exercises that may dramatically reduce the number of non-contact ACL injuries. The Capital Area Soccer League began using his team's Performance Enhancement and Kinetic Control system (www.unc.edu/depts/exercise/peak) this fall with about 600 female youth players. The girls involved in the CASL program are expected to be evaluated during the next few years to see if the program is effective.

The boys teams are expected to use PEAK in the spring.

The PEAK program was developed after a five-year study at the U.S. Military, Naval and Air Force academies that included a test to help identify athletes who are at the greatest risk of a non-contact ACL injury.

In the study, the largest of its kind ever conducted, every incoming student was videoed jumping off a block and springing upward. Later, if a student had a non-contact ACL injury, the initial test results were reviewed. Researchers identified similar characteristics in body movement while landing and leaping among many of the injured students.

Additional research at UNC indicates uncontrolled hip motion predisposes an athlete for a non-contact ACL tear, and the academy study and others found that girls are more likely to move in a way that could cause the injury.

"What we have found is that injuring your ACL is less about structure, than about the way we move," Padua said. "It is not so much about genetics or bad luck as is it about the way our bodies perform."

"The injury can be repaired, but if we don't address what caused the tear, poor body movement, then it will tear again. We need to correct the movement pattern to prevent the injury," Padua said.

No exercise program probably would have prevented former Broughton soccer player Lexi Miller's right ACL tear. She was blocking a pass during a workout at East Carolina, then she fractured her femur, tore her ACL and tore her meniscus all at once.

But ACL injuries like her previous injury to her left knee might be prevented in the future. That injury didn't involve a direct hit to the knee.

"I was running and it just happened," Miller said.

Correcting the way athletes move involves changing neuro-muscular control. Exercises have been developed to teach athletes a better way to jump, land, and run. The younger the athlete, the easier to correct mechanical flaws. But even among teenagers, if the exercises are used consistently for about nine months studies indicate that athletes can be taught a safer way to move and with an improved athletic performance because they are moving more efficiently.

Putting it into practice

The PEAK system involves a series of exercises that can be used instead of the traditional warm-up exercises at the start of practice.

"Coaches do not want to interfere with practice and skill development, but when we tell coaches that we believe we have a 10 to 15-minute workout that can to be used as a warm-up instead of jumping jacks, etcetera, and can reduce injuries, coaches are open," Padua said.

"These are exercises to correct movement patterns that are consistent with ACL injuries."

Padua said prevention is a key. "Most people are born with a perfect ACL," he said. "You can't improve on perfection regardless of how well you recover."

In addition to helping to keep the body stable, the knees are also subjected to extreme forces during pivotal movements. As a result, the knees are prone to injury. In fact, over the past decade, knee surgery has become a quite common practice. The anterior cruciate ligament, or ACL, is the most vulnerable to stress during pivotal movements, such as the cutting maneuvers that are required by athletes in a number of different sports. In order to get back into the game following ACL surgery, you must fully regain the ability to perform pivotal movements, such as running, jumping and changing directions at a high rate of speed. Centers for ACL surgery in Germany