Cinematic god gets an update with help from his family 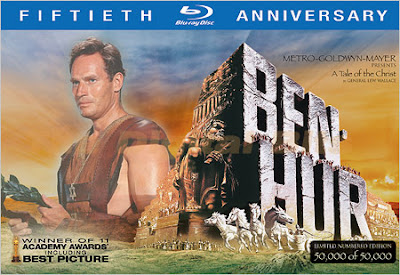 Looking to develop new special features to support Tuesday’s Blu-ray debut of “Ben-Hur,” Warner Home Video president Jeff Baker asked the son of the classic’s Oscar-winning star, Charlton Heston, if he had any unseen material that might be useful.

“Boy, do we ever!” Fraser Heston replied — an inventory of his father’s holdings after his death in 2008 turned up three full 16 mm reels of color home movies shot by his mother on the set of the Oscar-winning biblical epic, as well as extensive behind-the-scenes footage taken during the family’s nine-month stay in Rome.

“I was amazed at all of the stuff from early 1958, when the family got on the plane to New York to take an ocean liner to Rome for the filming,” says Fraser Heston, a film director. “It continued well into 1959 and even into 1960, when you can see my parents returning to the new home that was being built for the family in our absence.”

The footage was turned into a new feature-length documentary, “Charlton Heston and Ben-Hur: A Personal Journey,” which is included with the Blu-ray version of “Ben-Hur,” whose spectacular restoration from the original 65 mm is arriving two years after the actual 50th anniversary of the film (it will also be shown Saturday at Alice Tully Hall as part of the New York Film Festival).

Thanks to the excellently composed footage taken by Lydia Heston — she became an expert photographer, her son says, after someone gave her a still camera on the set of “The Ten Commandments” — we can see the preparations for the famous chariot race as well as it actually being shot by director William Wyler’s cameras. And 3-year-old Fraser riding in a chariot with his father, wearing a miniature Roman centurion costume.

As there were already two earlier making-of pieces included in the video release, Fraser Heston was pleased that what emerged in Laurent Bouzereau’s documentary “was something that was about how the production affected us as a family and my father as an actor.” Though people assume that “The Ten Commandments” made Charlton Heston a superstar, “he felt it hadn’t rocketed him into the upper reaches of the Hollywood stratosphere,” Fraser says. “He wanted to be taken seriously as an actor, and that’s what ‘Ben-Hur’ did for him finally. He had his choice of scripts.”

In the documentary, Fraser Heston reads excerpts from a diary his father kept during production of “Ben-Hur” — a hardbound copy of the entire diary, with Lydia Heston’s still photographs, is included with the Blu-ray release.

One of the things that comes across very clearly is how much pressure Heston and everyone else — producer Sam Zimbalist died of a heart attack during the shoot — felt for the film to succeed.

“It was a terribly risky project for MGM,” Fraser Heston says. “They didn’t know whether they’d have enough money to even finish the picture.”

His father was very pleased with the final film, which won 11 Oscars (a record not equaled until “Titanic”) and was a box-office smash for the studio. Adjusted for inflation, the domestic gross alone was $781 million, putting it at No. 23 on the all-time list, just ahead of “Avatar.”

As for the digital restoration, Fraser Heston says “it looks you can step right into the film with the actors. As my father said, ‘Film is our best export next to freedom.’ ”