Sharia Enclaves in the West 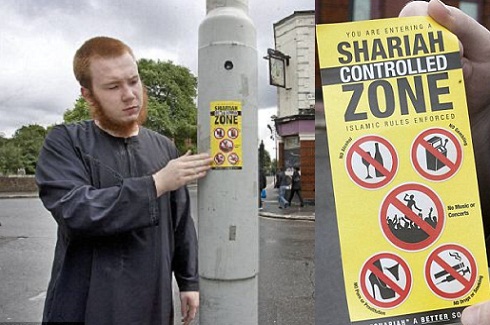 Islamist organizations are hard at work creating Muslim enclaves in the West, including right here in the United States. These efforts are designed to create Islamic autonomous areas, often with the expressed desire of incrementally bringing the host country completely under Sharia-based governance. This campaign has not stopped or even slowed down since FrontPage Magazine and the Middle East Forum shined the light on it one year ago.

One group leading the effort to establish Islamist communities within the U.S. is As-Sabiqun, led by an extremist cleric named Imam Abdul Alim Musa. His list of heroes reads like a who’s-who of the jihadist world, from Hasan al-Banna to Sayyid Qutb to Ayatollah Khomeini. He recently heaped praise upon Iranian President Ahmadinejad. In June 2002, he expressed support for suicide bombings in Israel. He preaches that the 9/11 attacks were a CIA/Mossad operation, says he “like[s]” Osama Bin Laden, supports Hezbollah, and describes Hamas as being “very nice people.” The As-Sabiqun Web site has a plan to create Sharia enclaves in the U.S. in stages, beginning with moving Muslims to one area and setting up independent social services.

As-Sabiqun is now fundraising for two new initiatives: The “Islamic Institute of Counter Zionist American Psychological Warfare” and the “College in Islamic Movement Studies.” The appeal for support explains, “We are an anti-Zionist American psycho-guerrilla warfare movement.” It expresses the group’s hatred for the U.S. government, saying the institutions will “use all available tools in our environment in exposing the anti-Islamic, anti-human policies of this Zionist American system.” As-Sabiqun’s explicit goal is bringing the U.S. under Sharia law.

A music producer named Kenny Gamble, who now goes by the name of Luqman Abdul Haqq, is a major player in the enclave movement. He has been accused of trying to set up a “black Muslim enclave” in Philadelphia, and has a leadership position with the Muslim Alliance in North America. Significantly, Imam Musa also once held a position with the organization, but his name no longer appears on the Web site. Joe Kaufman, chairman of Americans Against Hate, discovered that Gamble has some very frightening affiliations.

Gamble owns a mosque in Philadelphia that opened in 1994. It was the first mosque belonging to an organization called the United Muslim Movement. Gamble is also behind a group called the Jawala Scouts, which was registered in 2005 under an address matching that of the United Muslim Movement. The scouts teach Muslim boys as young as 7 years old how to use firearms and various combat and survival skills, while dressed in military attire. The scouts initiative was launched by the Sankore Institute of Islamic-African Studies International. It was founded in Sudan and had its offices raided in 2006 by the FBI as part of a terrorism investigation. The organization has many former felons as members, and its Web site shows members with swords and guns. Its anti-American director condemns “pacifist ‘imams’ who deny the obligation of jihad [holy war] and who have deluded their followers into the fruitless activity of supporting democratic constitutional government.”

Outrageously, Gamble is receiving taxpayer money. In September 2010, his organization, Universal Community Homes, won a $500,000 grant from the Department of Education. The grant was awarded to candidates who “create plans to provide cradle-to-career services that improve the educational achievement and healthy development of children.” 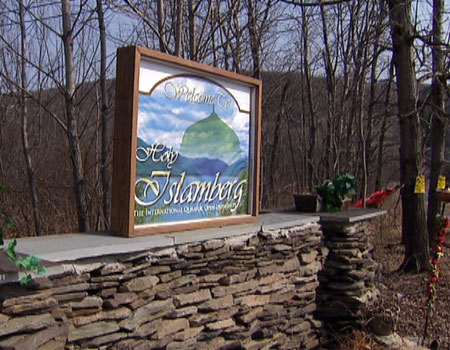 The gate to Islamberg, N.Y., a private Muslim community that is home to an estimated 100 residents. The sign reads: 'Welcome to Holy Islamberg, The International Quranic Open University.'

The most successful organization in the enclave movement within the U.S. is Muslims of the Americas. The group boasts of having 22 “villages” around the country, with some being dozens of acres large. The Christian Action Network released a documentary in 2009 about the group, and has videotaped proof that guerrilla warfare training has taken place at its “Islamberg” headquarters. The group is trying to rebrand itself through its front, the United Muslim Christian Forum. I attended its latest event in April, as detailed in FrontPage. The group continues to be whitewashed by local newspapers, and is vigorously warning about the Satanic “jinn beings” possessing people through movies like Avatar, Star Wars, Lord of the Rings, and The Exorcist. It is still promoting theories about Zionist involvement in 9/11, and salutes Ahmadinejad for his suggestions that elements of the U.S. government were involved., and even compared the Iranian president to the Mahdi.

The enclave effort isn’t limited to the U.S. A declassified intelligence report by Canada’s Integrated Threat Assessment Centre warns of non-violent Islamists trying to build a “parallel society” within the country. It specifically names the Muslim Brotherhood and Hizb ut-Tahrir as groups trying to make “mini-societies,” though Muslims of the Americas operates in Canada also. “Isolationism can lead to conditions where extreme messages can incubate and eventually become the catalyst for violence. At a minimum, isolationism undermines a multicultural and democratic system,” it states.

Spain’s National Intelligence Center reports that tens of millions of dollars are flowing into the country from Saudi Arabia, the United Arab Emirates, Qatar, Kuwait, Oman, Morocco and Libya. “The financing is having negative consequences for [multicultural] coexistence in Spain, such as the emergence of parallel societies and ghettos, Islamic courts and police that operate outside of Spanish jurisprudence, removing girls from schools, forced marriages, etc.,” it says. There are at least 100 mosques in Spain with radical imams, some of whom use religious police to enforce Sharia.

Most recently, the Muslims Against the Crusades group in the United Kingdom received attention for starting the “Islamic Emirates Project.” It seeks to transform 12 British towns into independent Sharia enclaves. Yellow posters stating, “You are entering a Sharia-controlled zone—Islamic rules enforced” are now going up in these areas. Between 10 and 50,000 stickers have been printed announcing the unilateral declarations.

The lack of assimilation by Muslim immigrant communities in Europe is leading to the unplanned creation of ghettos that can become enclaves. In the U.K., the government has listed certain “ethnic minority areas” where soldiers are asked not to wear their uniforms in public. In France, there are 751 “sensitive urban zones,” aptly dubbed “No Go Zones” by Dr. Daniel Pipes. In Greece and France, Muslim areas have erupted with large-scale riots over perceived transgressions by law enforcement. In Sweden, the city of Rinkeby, nicknamed “Little Mogadishu,” experienced massive riots for two days in June 2010. The Muslim immigrant population is quickly growing in Malmo, resulting in intimidation of the Jewish community and areas that emergency service personnel refuse to enter without police escort.

Enclaves where Islamism breeds and parallels society are being built right under the West’s nose. And meanwhile, those trying to warn about this trend are insulted as paranoid Islamophobes.
Posted by jtf at 5:20 AM