Trust the states and the people to govern themselves. 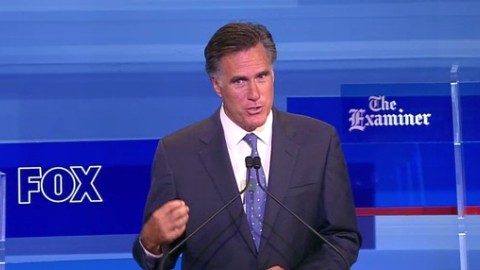 On a night when he was the clear winner, it was only natural that Mitt Romney got off the best line of Thursday’s GOP presidential debate. “Are you familiar with the Massachusetts constitution?”

He posed that question to Chris Wallace, the Fox News panelist who had been grilling him on Romneycare, the health-insurance program imposed on Bay State residents by the former Massachusetts governor and the state’s legislature. Governor Romney’s rivals have been pounding away at the program, portraying it as the model for Obamacare — the deeply unpopular foundation for a nationally socialized health-care system, vigorous opposition to which catapulted Republicans to historic success in the 2010 midterm elections.

For good reason, GOP presidential hopefuls see immovable opposition to Obamacare as key to wresting the Oval Office from its current occupant. Romney’s frontrunner status, they reason, owes more to the party establishment’s dubious “It’s his turn” tradition than to any groundswell of support from the grassroots that swept Democrats out in the midterms. So the strategy is to use Romneycare — particularly its dread mandate that individuals buy health insurance — to hang Obamacare and its Big Government noose around Romney’s neck. Tim Pawlenty, a candidate groping for traction, has even coined the term “Obamneycare” to highlight the similarities between the two schemes.

That’s exactly where Mr. Wallace was going. “Do you believe the government has . . . the right to make someone buy a good or service just because they [sic] are a U.S. resident? . . . Where do you find that authority in the Constitution?”

It was then that Governor Romney abruptly turned the tables, challenging his questioner’s own understanding of constitutional law — to be specific, the law laid down in a constitution that is both seven years older than the federal one and, under the GOP’s oft-claimed (but rarely practiced) small-government allegiance, more pertinent to the matter of health care.

Mr. Wallace is a Beltway habitué. That he seemed nonplussed by Romney’s retort is to be expected. In Washington, there is nothing but Washington. When they talk about “the government” they are thinking only of our soon-to-be $17 trillion–in–the–red collosus. What is surprising, though, is how little the other candidates on the stage seemed to grasp what Romney was talking about, notwithstanding their chest-pounding about slashing the size of government.

Don’t get me wrong. I’m no more convinced that Governor Romney bleeds Tenth Amendment red than I am that Ron Paul is coming around on that whole Federal Reserve thing. Romney has a significant political vulnerability, and, like a lawyer boxed in by precedents, he’s got to take his escape hatches wherever he can find them. He may have landed on the Massachusetts constitution more out of necessity than conviction.

But land there he did, and it just might save him. To make this argument, the governor, who is clearly a sharp guy, has had to wrap his brain around the principle of federalism and what it portends: concepts of state sovereignty and limited central government in a pluralistic republic.

Let’s put health care to the side. Say a governor and state legislature had enacted a scheme to establish a state religion, or at least to advantage one religion over others. One could argue that this was — or was not — unwise policy. It certainly seems as hostile to liberty as the idea of coercing a citizen to buy a commodity as a condition of citizenship. Yet, for the first 160 years of governance under the federal constitution, there would have been nothing objectionable about it under U.S. law. Until the Supreme Court suddenly decided to “incorporate” the Establishment Clause against the states, the First Amendment was no bar. The federal government, as Jefferson put it, was “interdicted from intermeddling” in matters of religion — religion was an issue left to the states and their citizens, and we trusted them to handle it responsibly.

That is the way our system is supposed to work. The federal government has a few discrete areas of national concern to regulate. The rest belong to the states and the people, to regulate or not as they see fit. In a free society, that means decisions on most matters of community life get made by the community that has to live with them — and pay for them. In a pluralistic society, that means we could have 50 different ways of doing things — meaning that if you find yourself in a state that is foolish enough to mandate the purchase of health insurance subsidized by taxes or penalties, you are free to move to some state that isn’t.

The inability in a federalist system to impose a “one size fits all” solution on every choice decompresses a society — which is now a society of over 300 million people with very different ideas about how we should live. It promotes social harmony by allowing people to gravitate to the communities where life best suits them.

If I were living in Massachusetts (or anyplace else), I would argue that health care is not a corporate asset and that it’s none of anyone’s business whether I choose to buy coverage. But if I lost that debate, and if the coercive mandate law bothered me enough, I could move to some state where the law was different. Or I might decide that, in the greater scheme of things, life in Massachusetts was worth enduring the nuisance and costs of state policies to which I objected. But in either event, none of my calculations would be the concern of someone living in, say, Colorado — at least as long as he wasn’t being made to pay for it.

To the contrary, Romney’s competitors opined that the federal constitution barred states like Massachusetts from imposing an individual mandate as part of an effort to ensure that every citizen in the state was covered. And from there, the putative champions of limited government went haywire. Some want gay marriage banned. Some want abortion banned and criminalized. If you listened to them long enough, it was like listening to Democrats: If I disapprove of it, surely it must be prohibited. If I approve, surely it must be the law.

I confess to thinking we’ve lost our way. The Framers gave us a federal constitution for a confident, self-determining people — people who could be trusted to make sensible choices, to govern themselves through legislation rather than be strait-jacketed in the uncompromising logic of law.

I happen to think gay marriage is an oddity — a category error that misconstrues the concept and institution of marriage. But I also appreciate that many people of good will (as opposed to people pushing a corrosive, anti-establishment agenda) would permit it out of an admirable desire to treat homosexuals with compassion and accord them some of the legal privileges (tax treatment, property rights, inheritance, etc.) attendant to marriage.

I’m not crazy about the idea, but neither am I threatened by it. I don’t believe there are enough gay people who will want to marry that the institution of marriage will be meaningfully imperiled. Public opinion remains decidedly against gay marriage, and most states will never permit it. I don’t see the harm in allowing the few states that would vote to permit it do just that — as long as other states may ban it in accordance with their own public policy, and as long as it is not a stealth invalidation of sincerely held religious beliefs. Gay marriage should never mean that Catholic adoption services must place babies with gay couples or cease operating.

Some respond, “Well, if you permit gay marriage, what’s to stop polygamy?” But if X then Y is a legal argument. We are a body politic, not the slaves of remorseless chains of legal reasoning. Legislation that permits one set of arrangements doesn’t require us to take the next step on the slippery slope.

Abortion is a heinous moral wrong because it takes human life. It is no less a taking of human life if conception is the result of rape or incest. Yet our society, fully understanding why it is revolted by abortion, favors these exceptions. And it wants abortion banned, but it does not want doctors and women prosecuted. These may not be logical distinctions, but they are sensible ones. They are accommodations that enable us to live harmoniously without agreeing. And they would prevent the vast majority of abortions.

If you want the federal constitution to ban something, then amend it. A constitutional amendment is not a prohibition imposed by the federal government, for the U.S. Constitution and the U.S. government are not the same thing. The Constitution is the compact of the people setting forth the terms on which we are bound together as a nation. In essence, it cannot be amended unless the provision in question garners super-majority support (two-thirds) in Congress, and then super-duper majority assent (three-fourths) in the states.

If banning state health-care mandates, gay marriage, and abortion, or other conservative policy prescriptions, can surmount those high hurdles, then they truly are reflective of the national will — of what it means to be an American. That is what is minimally necessary before they should be imposed as a condition of living in the United States. Same for the Left’s agenda. If a policy preference can’t meet that demanding test, then by all means continue trying to convince people to see it your way. But in the meantime, these are matters for the states to decide for themselves — and we ought to be confident that our fellow Americans will make rational choices, even if they differ from the choices we would make.

One other thing: The country is going broke. Our fiscal straits are not going to be fixed by reconfiguring “baseline-budgeting” or prescribing “spending caps.” That is fantasy. It implies that the federal government should be intruding into every area of our lives, but just in a more moderate way — one that leaves us, say, $22 trillion in debt rather than $24 trillion.

No, that won’t do. This gets solved only by drastically slashing the functions of the central government. It gets solved by zeroing out departments, agencies, and bureaucracies; by returning those functions to the states so that the people directly affected can decide what ought to be done and how much they’re willing to pay for it — not with other people’s money but with their own.

That will never happen — and thus, we will never pull back from the brink — unless we return to the Original Idea: Trust the states and the people to govern themselves.

I think Mitt’s on to something.

— Andrew C. McCarthy, a senior fellow at the National Review Institute, is the author, most recently, of The Grand Jihad: How Islam and the Left Sabotage America.
Posted by jtf at 10:08 PM