Pope's Easter Vigil Homily: We Celebrate the First Day of the New Creation 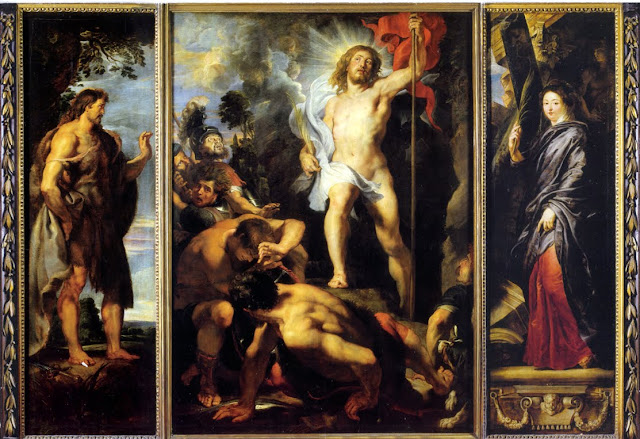 The liturgical celebration of the Easter Vigil makes use of two eloquent signs. First there is the fire that becomes light. As the procession makes its way through the church, shrouded in the darkness of the night, the light of the Paschal Candle becomes a wave of lights, and it speaks to us of Christ as the true morning star that never sets - the Risen Lord in whom light has conquered darkness. The second sign is water. On the one hand, it recalls the waters of the Red Sea, decline and death, the mystery of the Cross. But now it is presented to us as spring water, a life-giving element amid the dryness. Thus it becomes the image of the sacrament of baptism, through which we become sharers in the death and resurrection of Jesus Christ.

The Church wishes to offer us a panoramic view of whole trajectory of salvation history, starting with creation, passing through the election and the liberation of Israel to the testimony of the prophets by which this entire history is directed ever more clearly towards Jesus Christ. In the liturgical tradition all these readings were called prophecies. Even when they are not directly foretelling future events, they have a prophetic character, they show us the inner foundation and orientation of history. They cause creation and history to become transparent to what is essential. In this way they take us by the hand and lead us towards Christ, they show us the true Light.

At the Easter Vigil, the journey along the paths of sacred Scripture begins with the account of creation. This is the liturgy's way of telling us that the creation story is itself a prophecy. It is not information about the external processes by which the cosmos and man himself came into being. The Fathers of the Church were well aware of this. They did not interpret the story as an account of the process of the origins of things, but rather as a pointer towards the essential, towards the true beginning and end of our being.

Now, one might ask: is it really important to speak also of creation during the Easter Vigil? Could we not begin with the events in which God calls man, forms a people for himself and creates his history with men upon the earth? The answer has to be: no. To omit the creation would be to misunderstand the very history of God with men, to diminish it, to lose sight of its true order of greatness. The sweep of history established by God reaches back to the origins, back to creation.

Our profession of faith begins with the words: "We believe in God, the Father Almighty, Creator of heaven and earth". If we omit the beginning of the Credo, the whole history of salvation becomes too limited and too small. The Church is not some kind of association that concerns itself with man's religious needs but is limited to that objective. No, she brings man into contact with God and thus with the source of all things. Therefore we relate to God as Creator, and so we have a responsibility for creation. Our responsibility extends as far as creation because it comes from the Creator.

Only because God created everything can he give us life and direct our lives. Life in the Church's faith involves more than a set of feelings and sentiments and perhaps moral obligations. It embraces man in his entirety, from his origins to his eternal destiny. Only because creation belongs to God can we place ourselves completely in his hands. And only because he is the Creator can he give us life for ever. Joy over creation, thanksgiving for creation and responsibility for it all belong together. 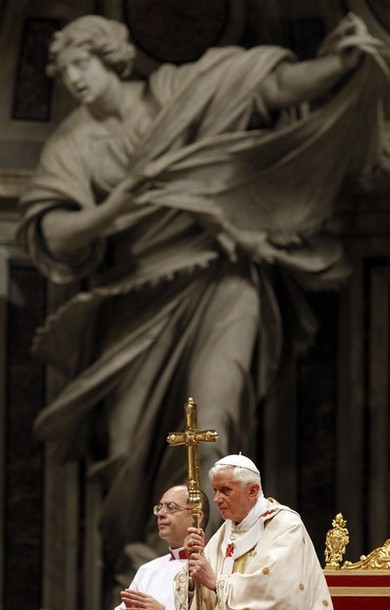 The central message of the creation account can be defined more precisely still. In the opening words of his Gospel, Saint John sums up the essential meaning of that account in this single statement: "In the beginning was the Word". In effect, the creation account that we listened to earlier is characterized by the regularly recurring phrase: "And God said ...." The world is a product of the Word, of the Logos, as Saint John expresses it, using a key term from the Greek language. "Logos" means "reason", "sense", "word". It is not reason pure and simple, but creative Reason, that speaks and communicates itself. It is Reason that both is and creates sense.

The creation account tells us, then, that the world is a product of creative Reason. Hence it tells us that, far from there being an absence of reason and freedom at the origin of all things, the source of everything is creative Reason, love, and freedom. Here we are faced with the ultimate alternative that is at stake in the dispute between faith and unbelief: are irrationality, lack of freedom and pure chance the origin of everything, or are reason, freedom and love at the origin of being? Does the primacy belong to unreason or to reason? This is what everything hinges upon in the final analysis.

As believers we answer, with the creation account and with John, that in the beginning is reason. In the beginning is freedom. Hence it is good to be a human person. It is not the case that in the expanding universe, at a late stage, in some tiny corner of the cosmos, there evolved randomly some species of living being capable of reasoning and of trying to find rationality within creation, or to bring rationality into it. If man were merely a random product of evolution in some place on the margins of the universe, then his life would make no sense or might even be a chance of nature. But no, Reason is there at the beginning: creative, divine Reason. And because it is Reason, it also created freedom; and because freedom can be abused, there also exist forces harmful to creation.

Hence a thick black line, so to speak, has been drawn across the structure of the universe and across the nature of man. But despite this contradiction, creation itself remains good, life remains good, because at the beginning is good Reason, God's creative love. Hence the world can be saved. Hence we can and must place ourselves on the side of reason, freedom and love - on the side of God who loves us so much that he suffered for us, that from his death there might emerge a new, definitive and healed life.

The Old Testament account of creation that we listened to clearly indicates this order of realities. But it leads us a further step forward. It has structured the process of creation within the framework of a week leading up to the Sabbath, in which it finds its completion. For Israel, the Sabbath was the day on which all could participate in God's rest, in which man and animal, master and slave, great and small were united in God's freedom. Thus the Sabbath was an expression of the Covenant between God and man and creation.

In this way, communion between God and man does not appear as something extra, something added later to a world already fully created. The Covenant, communion between God and man, is inbuilt at the deepest level of creation. Yes, the Covenant is the inner ground of creation, just as creation is the external presupposition of the Covenant. God made the world so that there could be a space where he might communicate his love, and from which the response of love might come back to him. From God's perspective, the heart of the man who responds to him is greater and more important than the whole immense material cosmos, for all that the latter allows us to glimpse something of God's grandeur.

Easter and the paschal experience of Christians, however, now require us to take a further step. The Sabbath is the seventh day of the week. After six days in which man in some sense participates in God's work of creation, the Sabbath is the day of rest. But something quite unprecedented happened in the nascent Church: the place of the Sabbath, the seventh day, was taken by the first day. As the day of the liturgical assembly, it is the day for encounter with God through Jesus Christ who as the Risen Lord encountered his followers on the first day, Sunday, after they had found the tomb empty.

The structure of the week is overturned. No longer does it point towards the seventh day, as the time to participate in God's rest. It sets out from the first day as the day of encounter with the Risen Lord. This encounter happens afresh at every celebration of the Eucharist, when the Lord enters anew into the midst of his disciples and gives himself to them, allows himself, so to speak, to be touched by them, sits down at table with them. This change is utterly extraordinary, considering that the Sabbath, the seventh day seen as the day of encounter with God, is so profoundly rooted in the Old Testament. If we also bear in mind how much the movement from work towards the rest-day corresponds to a natural rhythm, the dramatic nature of this change is even more striking.

This revolutionary development that occurred at the very the beginning of the Church's history can be explained only by the fact that something utterly new happened that day. The first day of the week was the third day after Jesus' death. It was the day when he showed himself to his disciples as the Risen Lord. In truth, this encounter had something unsettling about it. The world had changed. This man who had died was now living with a life that was no longer threatened by any death. A new form of life had been inaugurated, a new dimension of creation.