Only Hal Can Fix This Mess

Only Hal Steinbrenner can fix the disconnect between the Yankees, Brian Cashman and Derek Jeter 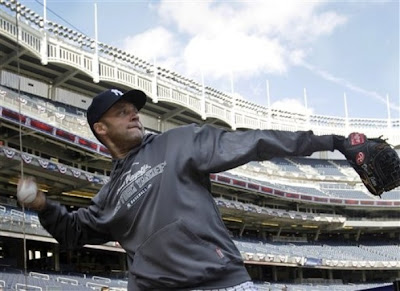 Derek Jeter tosses in the area behind home plate during a baseball workout at Yankee Stadium in New York, Tuesday, Oct. 12, 2010. (AP)


This is the way the Yankees want the conversation about Derek Jeter to go: They have arrived at what they think is a fair contract for Jeter and if he doesn't accept it, he's being greedy and unreasonable and unrealistic and should go test the market. That is what Brian Cashman said Tuesday. What he is really saying to Jeter about the Yankees' offer to him - $45 million for three years - is take it or leave it.

So we're already there. I said a few weeks ago that the leverage the Yankees have in this matter, and they have most of it, mattered only if they were prepared to swing it like a baseball bat. That is what's happening now, in just about every news cycle.

You wonder how long Hal Steinbrenner - does the front office work for him or is it the other way around? - lets this go on.

As one American League East executive said Tuesday, "Out of all the guys in sports, they're going to take this kind of hard line on Jeter?"

Over the past few days the Yankees seem to have lost their minds because Jeter's agent, Casey Close, told me Saturday night that he finds the Yankees' negotiating strategy "baffling."

Not stupid. Not cheap. Not arrogant. Not insulting. Baffling. But in the thin-skinned world of the Yankees, they acted as if Close were Larry Lucchino of the Red Sox calling them the "Evil Empire" all over again.

The Yankees act as if Close is the one who ramped up the rhetoric, and not the other way around. You know when the rhetoric really started on this thing? When Hal Steinbrenner said a few weeks ago that the Jeter negotiation "could get messy" before it ever really began. And you know who's the only one who can fix this now? Hal Steinbrenner.

Could Close and Jeter have come into this looking for too much money, way too many years? I'm sure they have. Just because the Yankees are being the Yankees doesn't mean that the other side is the Vatican. Close and Jeter probably want a lot more than three years. And a lot more than $45 million. If you were Jeter, so would you. Nobody can say he's been stealing money over the last decade.

But how about this as an idea for both sides to look at, before this whole thing becomes more viral than it is? How about you take the average that Jeter just made over the last 10 years - it would work out to $18.9 million a year - and make that the three-year offer. And if Jeter is still hitting .300 at the end of that, a fourth year, for the same money, automatically kicks in. 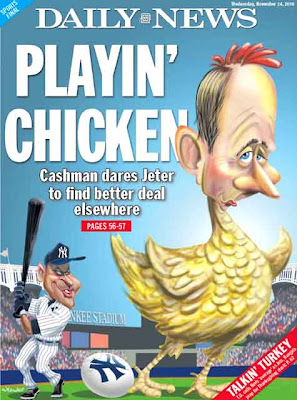 That way Jeter isn't asked to take a salary cut after everything he has meant to the Yankees and continues to mean. You know what the difference is between $57 million for three years and what the Yankees are offering Jeter? It's just a little more than the Yankees paid Javy Vazquez last season.

The $45 million the Yankees are offering Jeter for three years? It happens to be $1 million less than the $46 million they paid to a scrub pitcher named Kei Igawa. You remember that deal, $20 million for five years and a $26 million posting fee in Japan.

It was no different with Igawa than anybody else: The Yankees are always greedy when they want somebody. Only now Jeter is supposed to be the greedy one if he doesn't take what they're offering. They put out their number and that's it and that's all, take it or leave it.

Come on. Brian Cashman knows better than anyone that the market is always different here. Especially here. Always here. The top market for CC Sabathia a couple of years ago was $100 million. That means the top market outside of the Bronx. Cashman paid him $161 million. Sabathia was an ascendant star at the time, you bet. Now the implication is that Jeter is in decline after his .270 year, even though he hit .334 in 2009 with 212 hits and the Yankees won the World Series.

As one former major-league player said the other day, "What, (Jeter) has one bad year and now it's going to be straight downhill from here?"

Always in this negotiation, of course, the elephant in the room is Alex Rodriguez. He opted out on the Yankees at the end of the 2007 World Series, but it appears that wasn't nearly as offensive to the Yankees as the word "baffling." Not long after that, the Yankees gave him an insane contract extension, justifying it at the time by telling themselves of the marketing possibilities of his growing home run totals. Then A-Rod turned out to be a juicer in an era of juiced home run hitters and the Yankees were shocked.

Now they want to talk about anything except A-Rod's contract. Jeter wants to talk about it, though. He saw what everybody saw last season, that A-Rod hitting his 600th home run didn't exactly set the big town on its ear. Jeter is also smart enough to know it will be a little different this season when he gets near 3,000 hits. There are a few legitimate milestones left in baseball. And legitimate stars. Derek Jeter is one of them, even at his current age. Even after hitting .270 at the worst possible time.

We now know, in great detail and absolute clarity, how much the Yankees think Jeter is worth. You just wonder how much all this will cost them in the end.