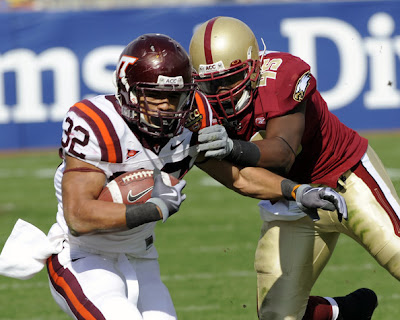 There were two ACC football games played on Saturday that were critically important to the postseason hopes of the teams involved: Virginia Tech at Miami and Florida State at Maryland. The Hokies went south looking to clinch the ACC Coastal Division title, while Miami tried to stay alive in the division race. The Seminoles traveled north to play the Terrapins in a game that would keep only the winner still in the running to win the ACC Atlantic.

On a perfect fall night, a crowd of 48,115 showed up at Byrd Stadium- easily the best of the season, but well short of the building's capacity of more than 54,000. The attendance at Sun Life Stadium in Miami, now the home of what was once the vaunted "U," had far more empty seats with a crowd of 40,101 spaced out comfortably in the 75,000-seat stadium.

Consider this: On the same day that Maryland people were giddy about a crowd of 48,000 showing up to see a team that has already won five more games than it did a year ago, a crowd of 78,790 gathered a few miles down the Beltway at virtually impossible-to-get-to FedEx Field to watch a game between a bad Big Ten team (Indiana) and a slightly-better-than-mediocre Big Ten team (Penn State).

The ACC has been trying to stake a claim as a legitimate football league since then-commissioner Gene Corrigan decided that an eight-team conference that played great basketball wasn't good enough, and recruited then-national power Florida State to join in 1992. The good news was that Florida State brought attention and revenue to the league. The bad news was that the ACC championship was decided in mid-September.

Florida State was 62-2 in ACC play during its first nine seasons in the league and very few of the Seminoles' games were even close. The ACC's national reputation changed: Where once it had been a league filled with teams that aspired to the Peach Bowl most years, it now became known as Florida State and the Seven Dwarfs - and Duke, which aspired to Dwarfdom.

When Florida State began to falter, the league became more balanced - or ordinary - depending on your point of view. That was when Commissioner John Swofford and the conference presidents came up with the brilliant idea of expansion, and raided the Big East for three top football schools: Miami and Virginia Tech in 2004 and Boston College a year later. The hope was that adding those three would force the other schools to improve the quality of their programs.

It did get a lot of them to spend more money on facilities and to pay coaches more money. It did not improve the quality of the football being played.

Instead, Miami and Boston College (7-4 and 6-5, respectively, this year) have slipped - considerably in Miami's case - and Virginia Tech has continued to be to college football what the Washington Capitals are to hockey: The Hokies put up gaudy numbers every year but wilt when the national spotlight hits them. They have been the ACC's dominant team since arriving in 2004, which is sort of like winning the NHL's Southeast Division every year.

At least Virginia Tech sells out Lane Stadium on a regular basis. The Hokies are the only ACC team to sell out all their home games this season. In fact, ACC attendance, which topped out in 2004 at 94.5 percent, is well below 90 percent going into the rivalry games on the season's final weekend that should - in most venues - push that figure a little higher.

The ACC spin-masters will tell you that the economy has affected attendance the last few years - although it doesn't appear to have hit the SEC or the Big Ten nearly as hard, if you check their attendance figures. Then they'll tell you that most of their attractive nonconference games this season were played on the road. There's a little bit of a Freudian slip in that excuse, because what that really says is that allegedly important conference games aren't that great a draw. Which they aren't.

A few weeks ago a key conference game between N.C. State and Clemson drew a crowd announced at 74,000 in 81,400 seat Memorial Stadium in Clemson. Those who were there said it looked like a lot less than that. This was at the one ACC school that was considered football-first prior to Florida State's arrival. Defending champion Georgia Tech drew less than 50,000 for its last three conference games in Bobby Dodd Stadium.

The spin-masters also fail to mention that Duke's home attendance jumped this season by almost 10,000 a game not because Blue Devils fans were hit with football fever, but because Alabama fans bought up season tickets in order to see their team play in Wallace Wade Stadium. A Duke season ticket doesn't cost much more than a single-game ticket at Alabama, and there were plenty available.

Last year's ACC championship game between Georgia Tech and Clemson drew a little more than 57,000 fans in Tampa - after the game was moved there because of poor attendance in Jacksonville. This year the game will be in Charlotte and the league office is insisting the game will sell out, if North Carolina State beats Maryland on Saturday to qualify to play Virginia Tech. If Florida State is the Hokies' opponent, don't count on it. FSU has not had a home sellout since 2008 - although it may sell out Saturday if enough Florida fans show up.

Of course the good news is that football expansion has helped ACC basketball attendance. Oh wait, that's not true either. In 2001, when the ACC basketball tournament was a nine-team event, it drew more than 40,000 fans per session to the Georgia Dome in Atlanta. Two years ago, in the same building, that number was down to an announced 25,000 for a 12-team event.

In 2012, when the ACC tournament returns to Atlanta, it will be played across the street in Phillips Arena, not because the ACC wants a better basketball atmosphere, but because there's at least a chance the tournament might fill an 18,729 seat arena. Last year, the Greensboro Coliseum had acres of empty seats throughout the weekend.

Almost every ACC football stadium has been expanded in recent years with disastrous results - none more so than in the case of Maryland. Former athletic director Debbie Yow did everything but flag people down on Route 1 in College Park trying to get them to sit in Byrd Stadium's empty luxury boxes.

The Terrapins will be trying for an eighth win Saturday and have a chance to make it to a reasonably good bowl game with a victory over North Carolina State. They can also knock the Wolfpack - and new Athletic Director Yow - out of the ACC title game with a victory. Good weather is expected.

And, as is almost always the case with an ACC football game, plenty of good seats are available.

For more from the author, visit his blog at www.feinsteinonthebrink.com
Posted by jtf at 4:25 PM