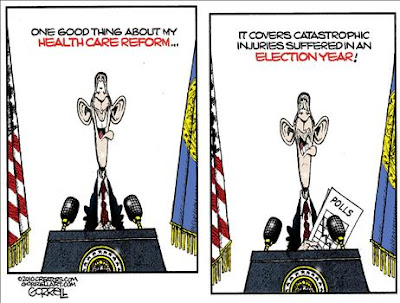 Most elections are about particular policies, particular scandals or particular personalities. But these issues don't mean as much this year-- not because they are not important, but because this election is a crossroads election, one that can decide what path this country will take for many years to come.

Runaway "stimulus" spending, high unemployment and ObamaCare are all legitimate and important issues. It is just that freedom and survival are more important.

For all its sweeping and scary provisions, ObamaCare is not nearly as important as the way it was passed. If legislation can become laws passed without either the public or the Congress knowing what is in those laws, then the fundamental principle of a free, self-governing people is completely undermined.

Some members of Congress who voted for ObamaCare, and who are now telling us that they realize this legislation has flaws which they intend to correct, are missing the point.

The very reason for holding hearings on pending legislation, listening to witnesses on all sides of the issue, and having Congressional debates that will be reported and commented on in the media, is so that problems can be explored and alternatives considered before the legislation is voted into law.

Rushing ObamaCare into law too fast for anyone to have read it served no other purpose than to prevent this very process from taking place. The rush to pass this law that would not take effect until after the next two elections simply cut the voters out of the loop-- and that is painfully close to ruling by decree.

Other actions and proposals by this administration likewise represent moves in the direction of arbitrary rule, worthy of a banana republic, with only a mocking facade of freedom.

These include threats against people who simply choose to express opinions counter to administration policy, such as a warning to an insurance company that there would be "zero tolerance" for "misinformation" when the insurance company said that ObamaCare would create costs that force up premiums.

Zero tolerance for the right of free speech guaranteed by the Constitution?

This warning comes from an administration with arbitrary powers that can impose ruinous costs on a given business.

Those who are constantly telling us that our economic problems are caused by not enough "regulation" never distinguish between regulation which simply enforces known rules, as contrasted with regulation that gives arbitrary powers to the government to force others to knuckle under to demands that have nothing to do with the ostensible purposes of the regulation.

As more businesses reveal that they are considering no longer buying health insurance for their employees, as a result of higher costs resulting from ObamaCare legislation, the administration has announced that it can grant waivers that reduce these costs.

But the power to grant waivers is the power to withhold waivers-- an arbitrary power that can impose millions of dollars in costs on businesses that the administration doesn't like.

Recent proposals from the Obama administration to force disclosure of the names of people who sponsor election ads would likewise open all who disagree with Obama to retaliation by the government itself, as well as by community activists and others.

History tells us where giving government one arbitrary power after another leads. It is like going into a Venus fly-trap, which is easy to enter and nearly impossible to get out of.

The headstrong, know-it-all willfulness of this administration, which threatens our freedom at home, also threatens our survival in the international jungle, because Obama seems determined to do nothing that will stop Iran from going nuclear.

The Obama administration goes through all sorts of charades at the U.N. and signs international agreements on sanctions that have been watered down to the point where they are not about to bring Iran's nuclear weapons program to a halt. The purpose is not to stop Iran but to stop the American people from realizing what Obama is doing or not doing.

We have a strange man in the White House. This election is a crossroads, because either his power will be curbed by depriving him of his huge Congressional majorities or he will continue on a road that jeopardizes both our freedom and our survival.
Posted by jtf at 7:22 AM