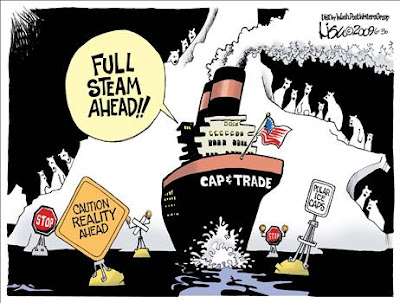 Undermining access to abundant conventional energy sources has proved to be a key component of Barack Obama's promised "fundamental transformation" of America. To be fair, he was uniquely candid when vowing that "under my plan of a cap-and-trade system electricity rates would necessarily skyrocket." This interview received limited coverage despite also revealing plans to "bankrupt" politically disfavored industry while also raising “billions of dollars."

Now, as the Senate prepares to debate the latest mislabeled "comprehensive energy legislation," and amid the unfolding revolt over the realities of this fundamental transformation, such radical propositions warrant revisiting.

Modern environmentalism of the sort reflected in Obama's rhetoric and policies is staunchly anti-energy. It seeks to use the state to create scarcity as a means of imposing the environmentalists' will on your lives. Congress, smarting from the 1993 "BTU" tax debacle that even Al Gore says led to Democrats losing control of Congress, is reluctant to vote on transparent energy tax hikes. So the desired scarcity is created instead by the opaque "cap-and-trade".


This scheme is undergoing its fourth Senate incarnation in seven years, driven by a classic if collapsing "Bootlegger and Baptist" coalition among rent-seeking industry and green pressure groups. Last June, they managed to drag the (immediately doomed) House version of the scheme over the finish line on a close vote that will cost lawmaker jobs just as surely as BTU did.

The House bill's requirement of energy use "allowances"—uncomfortably close to World War II-style ration coupons—was economy-wide. Although styled as "market-based," the market for the politically allocated allowances only began with a secondary market of those operations whose growth, or less formidable lobbying budgets, left them wanting.

To Obama's credit, his preferred approach sold all of the ration coupons ab initio, raising the promised billions immediately. Doling out free ice cream proved irresistible to the House Democrat leadership, however, who delayed the revenue gusher for a decade or so.

But no matter how the scheme is designed, energy and other costs will rise, harming competitiveness, chasing jobs and growth offshore and hurting lower income house-holds worst. So on the advice of Democrat pollsters like Stanley Greenberg, the energy-scarcity regime is now sold as a "jobs" program. As, it seems, is every measure presently before Congress, with equal plausibility.

The lure of "green jobs" is undeniable. But this jobs program uniquely included two years of relief for workers displaced by the mandates. If Europe's experience is any indicator, and it certainly should be, then those jobs lost will be many. Ask the 175 steelworkers added in 2005 by Acerinox—known here as North American Stainless—as a direct result of Europe's "green jobs" mandates and in anticipation of its cap-and-trade plan.

Lawmakers wave off such evidence airily claiming they will simply avoid Europe's debacle.
Further, the European "clean energy" and "green jobs" models Mr. Obama cites—Spain, Germany and Denmark—have proven to be expensive drains, harmful to competitiveness while creating artificial "bubbles" that can only be sustained by growing the public subsidies.

Likewise, the supposed green boom in China is not evidence of their "eating our lunch" as we are told, or their having finally defeated the laws of physics. Instead, China's windmill craze is purely the result of Western mandates, such as the Kyoto "Clean Development Mechanism" giving companies credit for installing windmills there instead of even more costly experiments in trying to reduce emissions at home.

No, this agenda is not about jobs and not about "the climate." It is about power and "organizing society," no matter that we are just as reluctant as the weather to succumb to the gentle ministrations of Washington bureaucrats. So the policy brickbats have come out.

If you winced at the Obama Administration's refusal to release water to California farmers in the name of a fish—at least, until two congressmen whose constituents were affected agreed to vote for the healthcare bill—then avert your gaze from Obama's war on Appalachian coal being waged in the name of a bug (the Mayfly).

Obama's immediate moves to discourage domestic energy production (and consumption) include withdrawing massive tracts of public lands from energy exploration, leasing the fewest acres in any year on record, and seeking to lock up tens of thousands more despite a 2003 agreement to stop designating lands as wilderness as a means to shut them off from resource production.

Both of Obama's budgets proposed tens of billions in new taxes on oil and gas producers—with his Treasury department explaining to Congress that our tax code "encourages overproduction of oil and gas." This was not the public's impression, and they successfully demanded removal of moratoria on offshore and some onshore hydrocarbon energy production.

That one encouraging step forward was reversed almost in its entirety by Obama's recent move oddly styled as "opening up" certain areas of the Outer Continental Shelf while actually closing the vast majority to energy production.

Obama's support for loan guarantees for two new nuclear reactors was similarly aimed at drumming up support from soft Republicans for the expected Senate "energy" fight.

Though spun by his aides as meeting Republicans halfway, it actually goes just 2% of the way toward satisfying his own economic assumptions. That is, to tame the projected costs of cap-and-trade, he assumed 100 new nuclear reactors.

Most menacing of all, the administration began regulating carbon dioxide from motor vehicles—thereby triggering an economy-wide regulatory cascade, down even to the retail store level and with even EPA projecting "absurd results”—claiming the Supreme Court mandated it. Of course, the Court in Massachusetts v. EPA did no such thing, but merely gave EPA this authority. Obama is running with it, while typically pointing the finger of blame at others.

Obama's power grab is not about the climate, or jobs, but about your freedoms which a certain class can no longer tolerate. Controlling access to energy is one sure way to organize things, and that is what President Obama seeks to do, sooner rather than later.

We can't say we weren't warned.

Mr. Horner is author of "Red Hot Lies: How Global Warming Alarmists Use Threats, Fraud, and Deception to Keep You Misinformed."
Posted by jtf at 4:24 PM

Email ThisBlogThis!Share to TwitterShare to FacebookShare to Pinterest
Labels: Energy