Americans Are More Skeptical of Washington Than Ever

A desire for smaller government is especially evident since Barack Obama took office.

By almost every conceivable measure, Americans are less positive and more critical of their government these days. There is a perfect storm of conditions associated with distrust of government—a dismal economy, an unhappy public, and epic discontent with Congress and elected officials.

These are among the principal findings from a new series of Pew Research Center surveys. Rather than an activist government to deal with the nation's top problems, these surveys show that the general public now wants government reformed and a growing number want its power curtailed. With the exception of greater regulation of Wall Street, there is less of an appetite for government solutions to the nation's problems—including greater government control over the economy—than there was when Barack Obama first took office.

The public's hostility toward government seems likely to be an important election issue favoring the Republicans this fall. But the Democrats can take some solace in the fact that neither party can be confident it has the advantage among such a disillusioned electorate. Favorable ratings for both major parties, as well as for Congress, have reached record lows. Opposition to congressional incumbents, already approaching an all-time high, continues to climb.

The tea party movement, which has a small but fervent antigovernment constituency, could be a wild card in this election. On the one hand, its sympathizers are highly energized and inclined to vote Republican. On the other, many Republicans (28%), and Independents who lean Republican (30%), say the "tea party" represents their point of view better than the GOP. 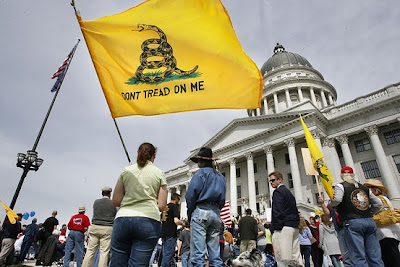 Over the course of the past decade we've seen a spike in intense antigovernment attitudes amongst a small segment of the public. The proportion saying they are angry with the federal government has doubled since 2000, increasing to 21% from 10%. And a larger minority of the public has come to view the federal government as a major threat to their personal freedom: 30% feel this way, up from 18% in a 2003 ABC News/Washington Post survey.

The Pew Research Center surveys provide a detailed picture of the public's opinions about government and how it differs from the climate of opinion in the late 1990s, when criticism of government had declined from earlier in the decade. At that time, the public's desire for government services and activism was holding steady.

This is not the case today. Just 22% say they can trust the government in Washington almost always or most of the time, among the lowest measures in half a century.

Opinions about elected officials are particularly poor. Just 25% have a favorable opinion of Congress while 65% have an unfavorable view—the lowest favorable ratings for Congress in more than two decades of Pew Research center surveys.

Record discontent with Congress and dim views of elected officials generally have poisoned the well for trust in the federal government. Public opinion about elected officials in Washington is relentlessly negative. Favorable ratings for the Democratic Party have fallen by 21 points—to 38% from 59%—over the past year and now stand at their lowest point in Pew Research surveys. The Republican Party's ratings, which increased to 46% in February from 40% last August, have fallen back to 37%.

Nonetheless, antigovernment sentiment appears to be a more significant driver of possible turnout among Republicans and independents than among Democrats. Perhaps most troubling for Democrats, independent voters who are highly frustrated with government are also highly committed to casting a ballot this year, and they favor the Republican candidates in their districts by an overwhelming 66% to 13% margin.

Mr. Kohut is president of Pew Research Center. He is a past president of the Gallup Organization and the founder of Princeton Survey Research Associates.
Posted by jtf at 3:27 PM