Enjoy hockey’s Olympic moment while it’s still aglow because its luster is beginning to fade. Instead of looking forward to the splendor of the world’s best players again representing their nations in 2014 in Sochi, Russia, the N.H.L. is leaning toward secession from the Winter Games.

Sochi is too far away for its fans to care, the N.H.L. argues. With an eight-hour time difference between Sochi and the Eastern time zone, some games there would be played when most American viewers are working or asleep. 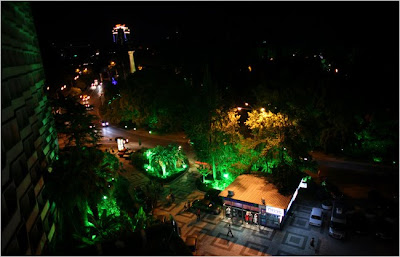 A subtropical climate is one of the issues Sochi, Russia, is facing as the host of the 2014 Games.

Television money is involved. When the rights to the Sochi Olympics and the 2016 Summer Games in Rio de Janeiro are up for bid late this year, the two expected bidders, NBC and ESPN, will need to know whether the N.H.L., which supplied 140 players for the Vancouver Games, will play again. If not, the bids will probably be lower.

Another factor for NBC is that its N.H.L. contract for Sunday afternoon and postseason games ends after the 2011 playoffs. If N.H.L. players are not promised for Sochi, a new NBC deal could be jeopardized. If the N.H.L. does not pause its season for the Olympics, another complication is that many of its European players may insist on joining their national teams anyway. Especially the Russians, who were co-favorites with Canada but failed miserably in Vancouver.

Prime Minister Vladimir V. Putin, the former Russian president who successfully campaigned for Sochi before the International Olympic Committee, asked last week for what he described as “serious critical analysis” of Russia’s weak performance in earning only three gold medals in Vancouver. Its acclaimed hockey team didn’t even qualify for the semifinals.

Putin demanded the creation of “the necessary conditions for the preparations and successful performance of our team” in Sochi.

And who’s to say that Putin, knowing what Canada’s hockey gold medal in Vancouver meant to that nation, would not demand that his country’s best players, like Alex Ovechkin and Ilya Kovalchuk, interrupt their obligations to the N.H.L. to compete for Mother Russia in Sochi.

If the Russians jumped their N.H.L. contracts for two weeks to join their national team in Sochi, why wouldn’t at least some N.H.L. players from Canada (hoping to defend their gold medal), the United States, and especially other European nations — Sweden, the Czech Republic, Finland and Slovakia — want to go to Sochi, too? If that happened, N.H.L. teams would need to fill out their rosters with several minor leaguers until the Olympic rebels returned.

N.H.L. players stocked the Canadian and United States teams in Vancouver. But if those teams were to send only college or amateur players to Sochi, the Russians would surely accuse them of conceding the Olympic tournament. The N.H.L. teams could fine players who leave for more than two weeks to play in Sochi, perhaps suspend them. But that would be like cutting off their hockey sticks to spite their hockey gloves.

Questions about the Sochi site add to the situation. The Winter Games there would be an “economic and ecological catastrophe,” Boris Y. Nemtsov, a former Russian deputy prime minister, told Foreign Policy magazine last week.

“He,” Nemtsov said, referring to Putin, “has found one of the only places in Russia where there is no snow in the winter. He has decided to build these ice rinks in the warmest part of the warmest region. Sochi is subtropical. There is no tradition of snow or hockey there. In Sochi, we prefer football, volleyball and swimming. Other parts of Russia need ice palaces. We don’t. Sometimes, it seems like God doesn’t even want the Olympics in Sochi.”

Nemtsov said the “bigger concerns are organized crime, which is very active there, and government corruption.”

He added that “roughly 5,000 people were forced out” of their homes to create room for Olympic facilities but that “thanks to the corruption and incompetence of authorities,” those people have not been “adequately compensated for their property or been given equivalent housing elsewhere, as they were promised.”

So instead of basking in the Olympic glow created by virtual competitive purity — no fights, no enforcers, no timeouts for commercials, few penalties — the future of hockey at its best is now at the mercy of the N.H.L.’s concern about a Russian time zone during an interruption to its season, the price of television rights to both the Olympics and the N.H.L., and the possibility of European players, notably Russians, defecting for two weeks.

Just when the N.H.L. struck gold and silver, it seems to prefer ice. Thin ice.
Posted by jtf at 9:04 AM