Much has been written of the recent Tom Hanks remarks to Douglas Brinkley in a Time magazine interview about his upcoming HBO series on World War II in the Pacific. Here is the explosive excerpt that is making the rounds today.

“Back in World War II, we viewed the Japanese as ‘yellow, slant-eyed dogs’ that believed in different gods. They were out to kill us because our way of living was different. We, in turn, wanted to annihilate them because they were different. Does that sound familiar, by any chance, to what’s going on today?”

Hanks may not have been quoted correctly; and his remarks may have been impromptu and poorly expressed; and we should give due consideration to the tremendous support Hanks has given in the past both to veterans and to commemoration of World War II; and his new HBO series could well be a fine bookend to Band of Brothers. All that said, Hanks’ comments were sadly infantile pop philosophizing offered by, well, an ignoramus. 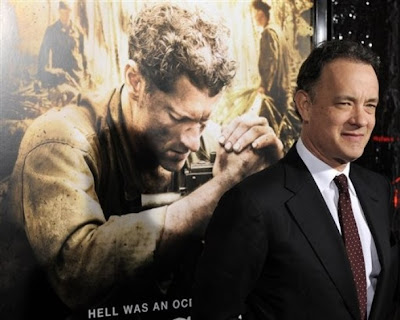 Tom Hanks, an executive producer of "The Pacific," poses at the premiere of the ten-part HBO miniseries in Los Angeles, Wednesday, Feb. 24, 2010. (AP)

Hanks thinks he is trying to explain the multifaceted Pacific theater in terms of a war brought on by and fought through racial animosity. That is ludicrous. Consider:

1) In earlier times, we had good relations with Japan (an ally during World War I, that played an important naval role in defeating imperial Germany at sea) and had stayed neutral in its disputes with Russia (Teddy Roosevelt won a 1906 Nobel Peace Prize for his intermediary role). The crisis that led to Pearl Harbor was not innately with the Japanese people per se (tens of thousands of whom had emigrated to the United States on word of mouth reports of opportunity for Japanese immigrants), but with Japanese militarism and its creed of Bushido that had hijacked, violently so in many cases, the government and put an entire society on a fascistic footing. We no more wished to annihilate Japanese because of racial hatred than we wished to ally with their Chinese enemies because of racial affinity. In terms of geo-strategy, race was not the real catalyst for war other than its role among Japanese militarists in energizing expansive Japanese militarism.

2) How would Hanks explain the brutal Pacific wars between Japanese and Chinese, Japanese and Koreans, Japanese and Filipinos, and Japanese and Pacific Islanders, in which not hundreds of thousands perished, but many millions? In each of these theaters, the United States was allied with Asians against an Asian Japan, whose racially-hyped “Greater East Asia Co-Prosperity Sphere,” aimed at freeing supposedly kindred Asians from European and white imperialism, flopped at its inauguration (primarily because of high-handed Japanese feelings of superiority and entitlement, which, in their emphasis on racial purity, were antithetical to the allied democracies, but quite in tune with kindred Axis power, Nazi Germany.)

3) Much of the devastating weaponry used on the Japanese (e.g., the B-29 fire raids, or the two nuclear bombs) were envisioned and designed to be used against Germany (cf. the 1941 worry over German nuclear physics) or were refined first in the European theater (cf. the allied fire raids on Hamburg and Dresden). Much of the worst savagery of the war came in 1945 when an increasingly mobilized and ever more powerful United States steadily turned its attention on Japan as the European theater waned and then ended four months before victory in the Pacific theater. Had we needed by 1945 to use atomic bombs, or massive formations of B-29s when they came on line, against Hitler, we most certainly would have.

We should also point out that for many Americans, initially in 1941-2, the real war was with the Japanese, not the Germans (despite an official policy of privileging the European theater in terms of supply and manpower), but not because of race hatred, but due to the surprise attack on Pearl Harbor.

Until then (Hitler would in reaction unwisely declare war on the U.S. on December 11, 1941) Germany had been careful to maintain the pretense of non-belligerency, while Japan chose to start a war through a rather treacherous surprise assault at a time of nominal peace — thus inciting furor among the American public.

Despite Hanks’ efforts at moral equivalence in making the U.S. and Japan kindred in their hatreds, America was attacked first, and its democratic system was both antithetical to the Japan of 1941, and capable of continual moral evolution in a way impossible under Gen. Tojo and his cadre. It is quite shameful to reduce that fundamental difference into a “they…us” 50/50 polarity. Indeed, the most disturbing phrase of all was Hanks’ suggestion that the Japanese wished to “kill” us, while we in turn wanted to “annihilate” them. Had they developed the bomb or other such weapons of mass destruction (and they had all sorts of plans of creating WMDs), and won the war, I can guarantee Hanks that he would probably not be here today, and that his Los Angeles would look nothing like a prosperous and modern Tokyo.

4) What is remarkable about the aftermath of WWII is the almost sudden postwar alliance between Japan and the U.S., primarily aimed at stopping the Soviets, and then later the communist Chinese. In other words, the United States, despite horrific battles in places like Iwo Jima and Okinawa, harbored little official postwar racial animosity in its foreign policy, helped to foster Japanese democracy, provided aid, and predicated its postwar alliances — in the manner of its prewar alliances — on the basis of ideology, not race. Hanks apparently has confused the furor of combat — in which racial hatred often becomes a multiplier of emotion for the soldier in extremis — with some sort of grand collective national racial policy that led to and guided our conduct.

An innately racist society could not have gone through the nightmare of Okinawa (nearly 50,000 Americans killed, wounded, or missing), and yet a mere few months later have in Tokyo, capital of the vanquished, a rather enlightened proconsul MacArthur, whose deference to Japanese religion, sensibilities, and tradition ensured a peaceful transition to a rather radical new independent and autonomous democratic culture.

5) Hanks quips, “Does that sound familiar, by any chance, to what’s going on today?” That is another unnecessary if asinine statement — if it refers to our struggle against radical Islam in the post 9/11 world. The U.S. has risked much to help Muslims in the Balkans and Somalia, freed Kuwait and Iraq in two wars against Saddam Hussein, liberated or helped to liberate Afghanistan both from the Russians and the Taliban, and has the most generous immigration policy toward Muslims of any country in the world, ensuring a degree of tolerance unimaginable to Muslims in, say, China or Russia. Hanks should compare the U.S. effort to foster democracy in Iraq with the Russian conduct in Chechnya to understand “what’s going on today.”

In short Hanks’s comments are as ahistorical as they are unhinged. One wonders — were they supposed to entice us into watching the upcoming HBO series on the Pacific theater? But if anyone is interested in the role of race on the battlefield, one could probably do far better in skipping Hanks, and reading instead E.B. Sledge’s brilliant memoir, With the Old Breed, which has a far more sophisticated analysis of race and combat on Peleliu and Okinawa, and was apparently (and I hope fairly ) drawn upon in the HBO series. (Sledge speaks of atrocities on both sides in the horrific close-quarter fighting on the islands, but he makes critical distinctions about accepted and non-accepted behaviors, the differences between Japanese and American attitudes, and in brilliant fashion appreciates the role of these campaigns in the larger war. One should memorize the last lines of his book.)

It would be easy to say that Hanks knows about as much about history as historians do about acting, but that would be too charitable. Anyone with a high school education, or an innate curiosity to read (and Hanks in the interview references works on the Pacific theater), can easily learn the truth on these broad subjects. In Hanks’ case, he is either ignorant and has done little real research, or in politically-correct fashion has taken a truth about combat in the Pacific (perceptions of cultural and racial difference often did intensify the savagery of combat) and turned it into The Truth about the origins and conduct of an entire war — apparently in smug expectation that such doctrinaire revisionism wins applause these days in the right places (though I doubt among the general public that he expects to watch the series.)

All in all, such moral equivalence (the Japanese and the U.S. were supposedly about the same in their hatreds) is quite sad, and yet another commentary on our postmodern society that is as ignorant about its own past as it is confused in its troubled present.
Posted by jtf at 9:23 AM