The images from Haiti are, if anything, only getting worse. What was left of an already fragile society is starting to break down, as violence and chaos take over. Despite the heroic efforts of aid workers and the battered Haitian government, it looks as if Haiti’s problems will persist well into the 21st century, long after the debris is cleared and the houses are rebuilt.

While the scope of the tragedy in Haiti is nearly impossible to exaggerate, it’s important to remember that last week’s earthquake was so deadly because Haiti is Haiti. 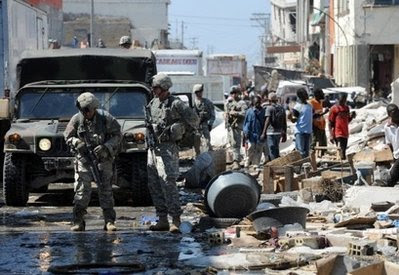 US troops patrol the streets of the Haiti capital Port-au-Prince. Search teams in Haiti are refusing to abandon hope of finding more survivors of the massive 7.0-magnitude quake after two children were pulled alive from the rubble in 24 hours.
(AFP/Juan Barreto)

If a similarly powerful earthquake were to hit much more densely populated San Francisco or Los Angeles, the death toll would be much lower. That’s an amazing thing when you consider that American cities are crammed with skyscrapers while Port-au-Prince’s skyline was, for the most part, one story high. Indeed, as others have noted, when a 7.1 earthquake hit the Bay Area two decades ago, 67 people were killed. Meanwhile, the Haitian death toll is almost unknowable, but almost certainly over 100,000 and climbing.

It’s hardly news that poverty makes people vulnerable to the full arsenal of Mother Nature’s fury. The closer you are to living in a state of nature, the crueler nature will be — which is one reason why people who romanticize tribal or pre-capitalist life (that would be you, James Cameron) tend to do so from a safe, air-conditioned distance and with easy access to flushing toilets, antibiotics, dentistry, and Chinese takeout.

The sad truth about Haiti isn’t simply that it is poor, but that it has a poverty culture. Yes, it has had awful luck. Absolutely, it has been exploited, abused, and betrayed ever since its days as a slave colony. So, if it alleviates Western guilt to say that Haiti’s poverty stems entirely from a legacy of racism and colonialism, fine. But Haiti has been independent and the poorest country in the hemisphere for a long time.

Even if blame lies everywhere except among the victims themselves, it doesn’t change the fact that Haiti will never get out of grinding poverty until it abandons much of its culture.

When Haitians leave Haiti for the U.S. they get richer almost overnight. This isn’t simply because wages are higher here or welfare payments more generous. Coming to America is a cultural leap of faith, physically and psychologically. Arnold Kling and Nick Schulz note in their phenomenal new book, From Poverty to Prosperity, that low-skilled Mexican laborers become 10 to 20 times more productive simply by crossing the border into the United States. William Lewis, former director of the McKinsey Global Institute, found that illiterate, non-English-speaking Mexican agricultural laborers in the U.S. were four times more productive than the same sorts of laborers in Brazil.

Why? Because American culture not only expects hard work, but teaches the unskilled how to work hard.

It’s true that Haiti has few natural resources, but neither does Japan or Switzerland. What those countries do have are what Kling and Schulz call valuable “intangible assets” — the skills, rules, laws, education, knowledge, customs, expectations, etc. that drive a prosperous society to generate prosperity. That is where the real wealth of nations is to be found — not in factories, oil deposits, and gold mines, but in our heads and in the habits of our hearts. Indeed, a recent World Bank study found that 82 percent of America’s wealth could be found in our intangible assets.

Haiti’s poverty stems from its lack of intangible capital. It shares the island of Hispaniola with the Dominican Republic, and yet the Dominicans have six times the GDP (and are far better stewards of their environment).

Collectively, Haiti depends on the kindness of strangers much more than on itself. Before the earthquake, Haiti had 10,000 non-governmental organizations working there, the highest rate per capita in the world. In 2007, notes Bret Stephens of the Wall Street Journal, it had ten times as much foreign aid as investment. If people are determined to blame Haiti’s problems on someone other than the Haitians, perhaps they could start by looking at the damage done by the foreign-aid industry.

I admit that I have a soft spot for Haiti, in part because the country is such an incredible underdog, and because I’ve always admired the Haitian-Americans I’ve known. I also have Haitians in my family — my brother is married to a Haitian immigrant.

So I say this with the best of intentions. Once the dead are buried, the wounded and sick healed, and the rubble cleared, it’s time for some tough love. Otherwise, Americans will just be back to clear the debris after the next disaster.


— Jonah Goldberg is editor-at-large of National Review Online and the author of Liberal Fascism: The Secret History of the American Left, From Mussolini to the Politics of Meaning. © 2010 Tribune Media Services, Inc.
Posted by jtf at 7:56 AM

I think the cycle of white/liberal/rich guilt, then ignoring the problems, then white/liberal/rich guilt, then ignoring it, is at the heart of this. This video http://tinyurl.com/yeybe7h talks about how sincere the celebrity efforts with Hope For Haiti truly were. As needed and generous as all the fundraising has been of late, when Haiti fades out of the public eye, America still needs to help Haiti stand on its own two feet.