In Brash Coach, Jets Knew They Had a Winner

FLORHAM PARK, N.J. — The Jets’ improbable run to the verge of their first Super Bowl appearance in 41 years started last January in a hotel conference room near the Baltimore-Washington airport. 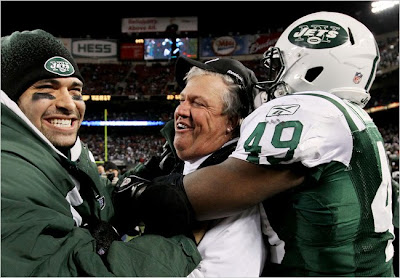 Rex Ryan, with rookie quarterback Mark Sanchez, left, and veteran fullback Tony Richardson, has led the Jets to within one victory of the Super Bowl.

The sixth of seven candidates to interview for the team’s vacant head-coaching position, Rex Ryan, was 45 minutes late. He arrived sweaty, almost panting, in a pinstripe suit with a white dress shirt. He carried a binder filled with 60 pages of detailed plans.

For more than four hours, Ryan’s precision and oversize presence captivated the team’s owner, Woody Johnson, and three senior executives. When he left, the four men shot glances around the table. No one spoke at first.

“It became apparent that Rex was our guy,” Johnson said.

In Ryan’s first season as coach, he changed the Jets’ second-class existence through the sheer force of his bold and brash personality. He spoke loudly and often about the talent that surrounded him, until the players believed every word he said. At his first news conference, he even predicted they would meet President Obama as Super Bowl champions in his tenure, a prospect that seemed outrageous after the Jets fell to 4-6.

Still, it took the Jets’ reaching Sunday’s American Football Conference championship game against the Indianapolis Colts for the N.F.L. to realize what the four men in that conference room knew on Jan. 11, 2009 — that Ryan could transform their team.

While they waited, Tannenbaum leafed through the overflowing binder labeled “Coaching Search.” He believed that candidates revealed character in the way they treated waiters, drivers, service staffers. To that end, he had everyone including the trainer and the groundskeeper call his Ravens counterpart.

Their reports ran for several pages, small font, single-spaced. Ravens employees described Ryan as “the nicest guy in the world” and said that players would follow him anywhere. One employee said he wanted to lie so that Ryan would not leave.

“What was unbelievable was the passion in which people believed in this guy and how much they rooted for him,” Tannenbaum said. “It was shocking.”

The Jets, with their tortured history of disappointment and bad bounces, had fired Eric Mangini, who was cut from the secretive, hooded-sweatshirt cloth of Bill Belichick, coach of the New England Patriots. In Ryan, they found Mangini’s opposite.

Ryan turned one of the most clandestine operations in professional football into an open book. The Jets collapsed at the end of last season in part because of the tense atmosphere. Ryan changed that, changed a culture, changed the way people felt about coming to work. He never called his predecessor. 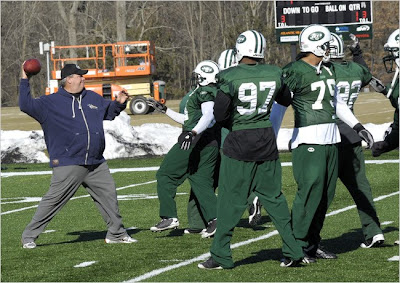 Rex Ryan, at left running a practice, showed he was more than a defensive-minded coach when he made the rookie quarterback Mark Sanchez his pet project.

So Ryan entered the conference room in a way that only Ryan can, Johnson said, balancing confidence with self-deprecating humor and sincerity. The Jets’ brass struggled to explain why Ryan had interviewed with four other teams and not landed a head-coaching job.

He had the pedigree. Ryan’s father, Buddy, was an assistant coach for the Jets when they won Super Bowl III in 1969 and won another championship with the Chicago Bears. Ryan had inherited his father’s defensive brilliance but not his cantankerous approach to public relations.

More than anything, Ryan’s engaging personality hooked the four Jets executives early, as it charmed the N.F.L. later on.
Clinkscales said that after five minutes, he felt he had known Ryan for 15 years.

But the Jets also needed to search beyond Ryan’s bluster, the jolly-fat-man routine. He described his philosophy in the interview, his plan to run the football and play harassing defense, ground and pound.

At the beginning of the interview, Ryan emphasized team building, insisting on taking the Jets away for training camp.

Ryan passed his binder around the table. He had planned the entire season.

The more he talked, the more layers he revealed. Ryan as motivation master, the king of pregame speeches. Ryan as guru of the N.F.L.’s best defenses in the past decade. Ryan as the meticulous, detail-oriented coach whose system was tailored for the current players.

Most everything Ryan proposed that day proved effective. He held training camp in Cortland, N.Y., and the bonds forged there in August began the team’s recent run. He built unity on accountability, made football fun again, grounded and pounded into the playoffs.

Ryan showed uncommon football acumen and a soft touch. The Jets responded one year ahead of schedule, winning seven of their last eight games.

Midseason, when the rookie quarterback Mark Sanchez threatened the Jets’ playoff chances with an avalanche of interceptions, Ryan took on greater offensive responsibilities. He made Sanchez his pet project, even devising a color-coded system to aid Sanchez’s decision-making.
Predictably, he turned the Jets’ defense into the league’s top-ranked unit.

Ryan also preached discipline. The Jets respected what Ryan stood for as much as what he said.

“You see Rex, and you see John Candy,” Tannenbaum said. “Like sometimes people get the impression of Rex that it’s just recess. But it’s not. The guy is coaching in the A.F.C. title game two years in a row. You don’t stumble into that.”

The rest of what makes up Ryan has been on display this season, but more quietly, behind the scenes. Instead of operating from a tower like a dictator, Ryan walks the hallways, massaging egos, cooking up defensive plans. 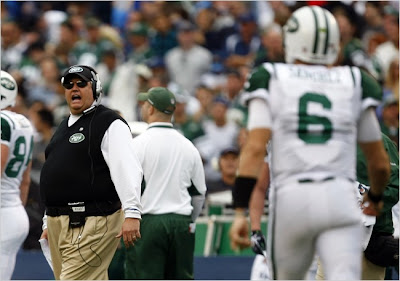 Ryan said at his first news conference that the Jets would win a Super Bowl during his tenure.

Mike Pettine, who followed Ryan from Baltimore and became defensive coordinator, likes to call him the country bumpkin from Oklahoma, the unshaven everyman dressed in sweats, pizza grease stains on his shirt.

“Beneath it all, he’s super, super intelligent,” Pettine said. “Like the guy in the movie ‘A Beautiful Mind.’ The things that come out of his mouth are not being shot from the hip. There’s a plan behind all of it.”

Shortly after Ryan’s hiring, a four-man Jets contingent was in Manhattan, Kan., working out a college quarterback and tooling around in a two-door pickup. Tannenbaum estimated that they consumed at least 40,000 calories of hamburgers and cheese fries at a fast-food restaurant. Ryan ordered the largest soda on the menu, and it punctured, spilling everywhere.

At that moment, Tannenbaum knew his instincts had been correct last January. The Jets had found their coach.

A Chemistry Forged Over Cigars and Defense (January 23, 2010)