HAPPY WARRIOR
from the Novemer 23 issue of National Review
http://www.nationalreview.com

“Would it not be easier,” wrote Bertolt Brecht after the East German uprising in 1953, “for the government to dissolve the people and elect another?”

The thought has occurred to several governments over the years, and I don’t mean the dictatorships. Andrew Neather, a former speechwriter for Tony Blair, wrote a piece for the London Evening Standard the other day and, considering he’s one of those quintessentially slippery New Labour spinmeisters, it was disarmingly insouciant in its straightforwardness. When Labour came to power in 1997, the number of work permits issued each year quadrupled and immigration exploded. Mr Neather revealed that there was “a driving political purpose” behind this: “Mass immigration was the way that the UK Government was going to make the UK truly multicultural.” From Labour’s point of view, it would have the additional benefit of helping put the Conservatives out of sync with the times: As Mr Neather writes, “The policy was intended – even if this wasn’t its main purpose – to rub the Right’s nose in diversity and render their arguments out of date.” If the justification for US immigration is that we need foreigners to do “the jobs that Americans won’t do”, in the United Kingdom they need them to do the jobs that no-one in their right mind would hire a working-class Brit for: The imported workers would be engaged in fields that “certainly wouldn’t be taken by unemployed BNP voters from Barking or Burnley,” sneers Mr Neather. “Fascist au pair, anyone?”

The BNP is the British National Party, and yes, it is, broadly, fascist. But it barely existed until New Labour’s plan to “make the UK truly multicultural” got under way, and it certainly never had such a purchase on England’s white working class that the one major European power that never succumbed to ‘tween-wars fascism this year elected two BNP members to the European Parliament.

That’s the problem with dissolving the people and electing another: You’d have to be a genius to pull off such a transformation without any unintended consequences. If Blair’s game was to import cool new Labour voters and make the dead white males of the Tory Party look even more squaresville, he also wound up imposing huge and potentially fatal stresses on Britain’s fraying societal structure. 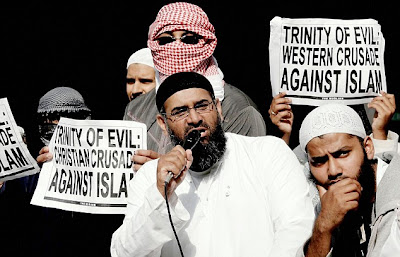 Take the recent observations of Anjem Choudary, Principal Lecturer of the London School of Shariah: “There is a spark that has ignited and its flame has become unstoppable,” he declared. “We find ourselves in the year 2009, waiting for Rome to fall, waiting for the White House to fall and indeed waiting for Buckingham Palace to fall.” Mr Choudary is a subject of the Crown but does not think of himself as such. His organization has demanded the Queen convert to Islam, wear a burka, and “stop playing God”. His website, Islam4UK, has many detailed illustrations of British landmarks after the introduction of Sharia: Buckingham Palace would be renamed “Buckingham Masjid” (or mosque) and have a dome fitted on top with speakers to call the faithful to prayer. It would be used as an Islamic court to issue punishments under Sharia, and also as a detention center for “prisoners of war”.

As it happens, Anjem Choudary is not an immigrant: He is British born and bred. But he is a testament to the “true multiculturalism” that New Labour prized so highly. For all but a few guilt-ridden middle-class liberals, “multiculturalism” is a nullity and those within its vapid bounds will seek their identity elsewhere. In a Britain with high Muslim immigration, high Muslim birth rates and high Muslim conversion rates, that means the host community winds up assimilating with the newcomers. In Surrey, the town of Sutton has just introduced female-only swimming sessions in the municipal pool for Muslim women. They’ll put blinds on the windows so no infidel men can see in, and the male lifeguards will be reassigned to other shifts. Might fall afoul of church-state separation in the US, but hey, what’s the big deal?

But why stop there? Azad Ali, the new advisor to the Crown Prosecution Service (the equivalent, more or less, of the US Attorneys), is a supporter of Abdullah Azzam, a key influence on Osama bin Laden, and a man who quotes approvingly such observations as “If I saw an American or British man wearing a soldier’s uniform inside Iraq I would kill him because that is my obligation.” Mr Ali’s appointment is part of the curious British strategy of “defusing” Islamic radicals by putting them all on the government payroll.

Even if one takes the view that arresting fellows for treason is awfully vulgar and a touch heavy-handed, it’s hard to see quite what benefit such chaps are to the United Kingdom. You can’t even say they contribute to “diversity” since such views are becoming distressingly ubiquitous. At a certain level, the idea of the muezzin issuing his call from Buckingham Palace is risible. But, after the Fall of Constantinople, it happened to what was then the largest Christian cathedral in the world. Is it really so fanciful to imagine the same thing happening in a country undergoing artificially induced, unprecedented demographic transformation?

The transparent ambition of an Anjem Choudary is less deluded than the blithe arrogance of an Andrew Neather. Combine them and toss in the likes of the British National Party, and you have the certainty of profound social convulsions in the years ahead. There'll always be an England? Ninety years ago, Bernard Shaw set his play Heartbreak House on the eve of the Great War among a British ruling class too smug and self-absorbed to see what was coming. “Do you think,” he wrote, “the laws of God will be suspended in favour of England because you were born in it?”
Posted by jtf at 8:59 AM