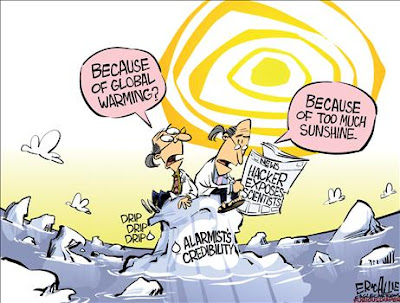 We all know the “t”-word. Our President has used it many times, as did former UN Secretary General Annan. It’s – all together now – transparency. Now the “t”-word is promised us in almost every campaign by politicians (and mega-bureaucrats like Kofi) and never delivered, so we’re used to looking at it with a jaundiced eye from them. But scientists, scientists, they are the big brains, the honest ones, the ones who, unlike cheap pols, work for eternity, like Galileo, Copernicus, Einstein.

Anyway, they were, until Climategate came along. Here from the Steve McIntyre’s Climate Audit blog is a breathtakingly short and simple illustration of the values of Dr. Phil Jones, Director of the University of East Anglia’s Climate Research Unit, from whence all these emails and documents concerning global warming have been lifted.

About 2 months ago I deleted loads of emails, so have very little – if anything at all.

We’ve not deleted any emails or data here at CRU.

Now look – I want to be clear. I don’t necessarily disagree that anthropogenic global warming is a danger. I’m beginning to doubt it, but I certainly don’t know. What’s clear, however, is these scientists at CRU don’t know (or aren’t so sure) either. Otherwise they wouldn’t have been so guarded, so deceptive, with their data (what remains of it) for so long. They would have been transparent and shared the data with the skeptics if they were so sure they were right. It’s the scientific thing to do, as we all learned in grammar school, if you’re serious about the truth.

But thus far our President and his crew, not to mention our friends at European Union and the UN, are going along as if this download never happened. It’s full steam ahead to Copenhagen:

The United States, under pressure from other nations as one of the world’s largest greenhouse-gas polluters, will present a target for reducing carbon dioxide emissions at next month’s climate conference in Copenhagen, Obama administration officials said Monday.

The development came as the European Union urged the United States and China to deliver greenhouse gas emissions targets at the long-anticipated summit, saying their delays were hindering global efforts to curb climate change.

What’s confusing here is that we all agree – or most of us- that pollution is bad. What we don’t agree on, now more than ever, is the role of AWG, which is increasingly mysterious the more you read these documents. As Charlie Martin shows us, it’s not just the emails, it’s the data itself that is corrupt. We don’t know what we know. But the world is poised to spend untold billions or trillions on that basis.

I happen to favor energy independence, was once a Sierra Club member (okay, I got sick of them) and currently drive a Prius – and still I think this stinks.

(btw, check out the Guardian interview with Jones: “Some of the emails probably had poorly chosen words and were sent in the heat of the moment, when I was frustrated. I do regret sending some of them. We’ve not deleted any emails or data here at CRU. I would never manipulate the data one bit – I would categorically deny that.” Hint to Jones: Never use the word “categorically.” It’s a dead giveaway.)

In the geological past, there have been six major ice ages. During five of these six ice ages, the atmospheric carbon dioxide content was higher than at present. It is clear that the colorless, odorless, non-poisonous gas called carbon dioxide did not drive past climates. Carbon dioxide is plant food, not a pollutant.

Humans have adapted to live on ice sheets, deserts, mountains, tropics, and sea level. History shows that humans and other organisms have thrived in warm times and suffered in cold times.

In the 600-year long Roman Warming, it was 4ºC warmer than now. Sea level did not rise and ice sheets did not disappear. The Dark Ages followed, and starvation, disease, and depopulation occurred. The Medieval Warming followed the Dark Ages, and for 400 years it was 5ºC warmer. Sea level did not rise and the ice sheets remained. The Medieval Warming was followed by the Little Ice Age, which finished in 1850. It is absolutely no surprise that temperature increased after a cold period.

Unless I have missed something, I am not aware of heavy industry, coal-fired power stations, or SUVs in the 1,000 years of Roman and Medieval Warmings. These natural warmings are a dreadful nuisance for climate alarmists because they suggest that the warming since 1850 may be natural and may not be related to carbon dioxide emissions.

Something is seriously wrong. To argue that humans change climate requires abandoning all we know about history, archaeology, geology, astronomy, and solar physics. This is exactly what has been done.

The answer to this enigma was revealed last week. It is fraud.

Files from the UK Climatic Research Unit were hacked. They show that data was massaged, numbers were fudged, diagrams were biased, there was destruction of data after freedom of information requests, and there was refusal to submit taxpayer-funded data for independent examination.

Data was manipulated to show that the Medieval Warming didn’t occur, and that we are not in a period of cooling. Furthermore, the warming of the 20th century was artificially inflated.

This behavior is that of criminals and all the data from the UK Hadley Centre and the US GISS must now be rejected. These crooks perpetrated these crimes at the expense of the British and U.S. taxpayers.

The same crooks control the IPCC and the fraudulent data in IPCC reports.
The same crooks meet in Copenhagen next week and want 0.7% of the Western world’s GDP to pass through an unelected UN government, and then on to sticky fingers in the developing world.

You should be angry. Very angry.

- Ian Plimer is author of Heaven+Earth: Global Warming -- The Missing Science (Taylor Trade, 2009) which exposed the fraud of global warming.
Posted by jtf at 8:49 AM