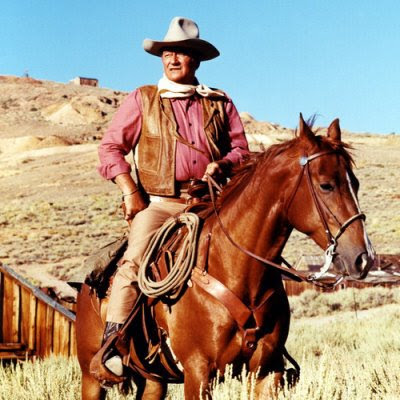 Marion Mitchell Morrison, springing from humble beginnings in Winterset, Iowa, was known to millions of movie-viewers as John Wayne, and to his friends as "Duke." He breathed his last at 5:23 P.M., June 11, 1979. Thirty years ago tomorrow. In those years we haven't seen his like, and probably won't again. The cultural soil just isn't here to grow another giant like the Duke.

Looking at the post-Duke culture, and the consequent train wreck of our politics, we haven't done so well without him showing the way in his vigorous but charming pre-Miranda style.

Although the Duke was probably the most popular movie star in Hollywood history, the current tinsel town of Sean Penn, George Clooney, Susan Sarandon, and the various Baldwins probably wouldn't have any place for the Duke. (The answer to the question, "How many Baldwin brothers are there?" is the same as the answer to, "How many timeouts are there in a basketball game?" Answer: No one knows for sure, but there's A LOT.)

It's fashionable since the sixties, at least in elite circles, to disparage the kind of conservatism and unrepentant patriotism the Duke represented. On top of being conservative, the Duke was unapologetically masculine, a man's man before this became politically incorrect. Even while millions of middle-Americans (and millions overseas) flocked to the Duke's movies, critics sneered and sniped at what they considered the Duke's overly simple moral code and his refusal to adopt their cynicism and irony.

There have been many biographies of the Duke. Some take the Hollywood hype approach. Others, like Garry Wills' John Wayne's America, attempt to deconstruct the Duke and Duke's America. We need not trouble with these.
Of the serious attempts to tell the Duke's story, the gold standard is 1995's John Wayne: American, by Randy Roberts and James S. Olson. Both are professors, but their writing is free of academic obscurity, theory, or liberal tics. These guys are no dusty dons or ideological red-hots. The book is still available and worth the reading time. 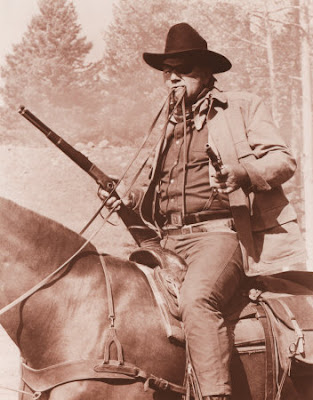 Here's how Roberts and Olson sum up the Duke's crosswise position to the literati and glitterati:

As the cultural elite turned increasingly liberal, Wayne remained wedded to rock-ribbed, traditional values. He was no ideologue. He was a classical liberal in a true Barry Goldwater sense, a mainstream American small-town conservative and a mainstream 1940s anti-communist….. In person and in his films, John Wayne insisted that evil had to be punished, violently if necessary. Communism, he believed, was an incorrigible evil, socialism and liberalism were mere fellow travelers, and he remained unrepentant in his convictions. Liberal critics could never give John Wayne his due because they could never see beyond his politics.

But American movie-goers gave the Duke his due. After World War II, the country had endured a Great Depression and had taken the largest part in defeating well-armed fascism (with no personal help from the Duke except in patriotic movies and USO tours it must be pointed out -- the Duke felt guilty for the rest of this life about his lack of military service in The Big One). We were confident and ready to go on the gaudiest and most successful roll in history. Americans were more united than they had been in any time in their history, and almost certainly more than we ever will be again.

The Duke was prefect for these times, and his career took off. Before it was done, The Duke had starred in 150 films (including the B films where he learned his craft in the 1930s). For a quarter century, 1949 to 1973, he was the biggest box-office draw in movies.

It's not hard to see why. The Duke's action flicks are morality plays, where good and evil have a vigorous go at each other and there's no difficulty telling which is which. The Duke played some subtle roles -- for example the sixtyish Captain Nathan Brittles in 1949's She Wore a Yellow Ribbon, a role the Duke took on when he was only 42, or 1976's The Shootist, the Duke's final role, where he plays John Bernard Books, an aging gunfighter dying of cancer when the Duke himself was an aging actor dying of cancer. But there is very little moral nuance to be found in the Duke's movies, and no angst at all. No pity parties.

Values like patriotism, honesty, fidelity, personal responsibility, and doing the hard and necessary job whether we want to or not are celebrated in the Duke's movies. (No one in the Duke's movies is getting in touch with his inner child, or taking a mental health day.) For this reason his movies are civics lessons as well as entertainments. 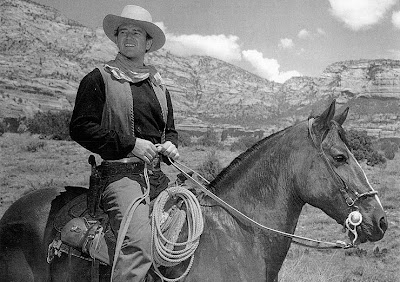 The Duke's movies are beautifully filmed, with many of the westerns unfolding in the incomparable Monument Valley (where Arizona and Utah come together). They were directed by some of Hollywood's best, John Ford and Howard Hawks, to name just two. Even the music in the westerns is stirring, the work of some first rate composers such as Elmer Bernstein, Dimitri Tiomkin, and John Williams.

The Duke's movies are still widely available for purchase, through the various rental outfits, and for free loan at various public libraries. So on this sad anniversary, TAS readers might consider remembering and celebrating the Duke while being entertained at the same time by watching the Duke again. As morality plays, the movies stand up well over time.

The Duke liked a drink (or several) about as well as the next guy. So if adult beverages are part of your dinner plans tomorrow, I'd ask you to raise your glass to the Duke. A great American (even if he didn't take arms against America's sea of troubles in uniform). And one of a kind.

We could sure use you today, big guy.

Larry Thornberry is a writer in Tampa.
Posted by jtf at 2:00 PM