Obama Hovers From on High 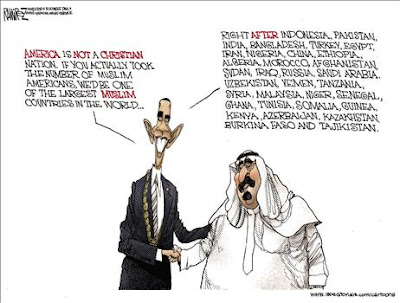 When President Obama returned from his first European trip, I observed that while over there he had been "acting the philosopher-king who hovers above the fray mediating" between America and the world. Now that Obama has returned from his "Muslim world" pilgrimage, even the left agrees. "Obama's standing above the country, above -- above the world. He's sort of God," Newsweek's Evan Thomas said to a concurring Chris Matthews, reflecting on Obama's lofty perception of himself as the great transcender.

Not that Obama considers himself divine. (He sees himself as merely messianic, or, at worst, apostolic.) But he does position himself as hovering above mere mortals, mere country, to gaze benignly upon the darkling plain beneath him where ignorant armies clash by night, blind to the common humanity that only he can see. Traveling the world, he brings the gospel of understanding and godly forbearance. We have all sinned against each other. We must now look beyond that and walk together to the sunny uplands of comity and understanding. He shall guide you. Thus:

(A) He told Iran that, on the one hand, America once helped overthrow an Iranian government, while on the other hand "Iran has played a role in acts of hostage-taking and violence against U.S. troops and civilians." (Played a role?!) We have both sinned; let us bury the past and begin anew.

(B) On religious tolerance, he gently referenced the Christians of Lebanon and Egypt, then lamented that the "divisions between Sunni and Shia have led to tragic violence" (note the use of the passive voice). He then criticized (in the active voice) Western religious intolerance for regulating the wearing of the hijab -- after citing America for making it difficult for Muslims to give to charity.

(C) Obama offered Muslims a careful admonition about women's rights, noting how denying women education impoverishes a country -- balanced, of course, with this: "Issues of women's equality are by no means simply an issue for Islam." Example? "The struggle for women's equality continues in many aspects of American life."

Well, yes. On the one hand, there certainly is some American university where the women's softball team has received insufficient Title IX funds -- while, on the other hand, Saudi women showing ankle are beaten in the street, Afghan school girls have acid thrown in their faces, and Iranian women are publicly stoned to death for adultery. (Gays, as well -- but then again we have Prop 8.) We all have our shortcomings, our national foibles.
Who's to judge?

That's the problem with Obama's transcultural evenhandedness. It gives the veneer of professorial sophistication to the most simple-minded observation: Of course there are rights and wrongs in all human affairs. Our species is a fallen one. But that doesn't mean that these rights and wrongs are of equal weight.

A CIA rent-a-mob in a coup 56 years ago does not balance the hostage-takings, throat-slittings, terror bombings and wanton slaughters perpetrated for 30 years by a thug regime in Tehran (and its surrogates) that our own State Department calls the world's "most active state sponsor of terrorism."

True, France prohibits the wearing of the hijab in certain public places, in part to allow the force of law to protect Muslim women who might be coerced into wearing it by neighborhood fundamentalist gangs. But it borders on the obscene to compare this mild preference for secularization (seen in Muslim Turkey as well) to the violence that has been visited upon Copts, Maronites, Bahais, Druze and other minorities in Muslim lands, and to the unspeakable cruelties perpetrated by Shiites and Sunnis upon each other.

Even on freedom of religion, Obama could not resist the compulsion to find fault with his own country: "For instance, in the United States, rules on charitable giving have made it harder for Muslims to fulfill their religious obligation" -- disgracefully giving the impression to a foreign audience not versed in our laws that there is active discrimination against Muslims, when the only restriction, applied to all donors regardless of religion, is on funding charities that serve as fronts for terror.

For all of his philosophy, the philosopher-king protests too much. Obama undoubtedly thinks he is demonstrating historical magnanimity with all these moral equivalencies and self-flagellating apologetics. On the contrary. He's showing cheap condescension, an unseemly hunger for applause and a willingness to distort history for political effect.

Distorting history is not truth-telling but the telling of soft lies. Creating false equivalencies is not moral leadership but moral abdication. And hovering above it all, above country and history, is a sign not of transcendence but of a disturbing ambivalence toward one's own country.

letters@ charleskrauthammer.com
Posted by jtf at 6:36 AM