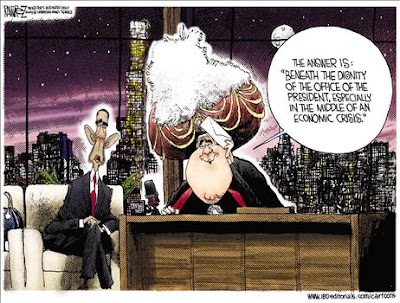 President Barack Obama must not have had his Hopium before appearing on "The Tonight Show" last week, because he really screwed up.

No, not the screw-up in which he abandoned his trusty teleprompter to ad-lib a joke about how he's such a lousy bowler, just like someone in the Special Olympics.

If Obama were a Republican, he'd be toast, since Republicans have been cast as unfeeling monsters in the two-dimensional cartoon that is American politics on TV. But Obama is a Democrat, beloved by the glassy-eyed media as a symbol of hope and change, even if guys from Chicago's City Hall run his administration. So the gaffe will soon wash over him.

Yet it's that other screw-up that is most illuminating—the one that was overshadowed by his unfortunate Special Olympics wisecrack.

Obama told Jay Leno he was surprised that those greedy AIG executives who helped lead the country into financial ruin were in line to receive $165 million in bonuses paid for by bailout cash authorized by his administration.

It turns out that his Treasury Secretary Timothy Geithner—who didn't pay all of his federal taxes but was still deemed worthy by Obama of collecting yours—knew all about the AIG bonuses weeks ago.

That was long before Washington Democrats began shrieking in pretend outrage over the bonuses, as if they didn't vote for them, sort of like Chicago aldermen shrieking about corruption from the 5th Floor.

It's like Mayor Richard Daley saying, "Gee, I dunno" when news breaks that his nephews are in another multimillion-dollar government deal. Or that time that Daley gave $100 million in affirmative action contracts to men he knows well, yet was stunned to learn later that they were white guys, not black females.

These days, the Washington Way is looking just like the Chicago Way. Those of us from Illinois can see it, what with City Hall guys pulling White House strings.

Then again, we're not surprised because we don't get the high-grade Hopium out here in the Midwest. The good stuff must be reserved for the Beltway media establishment, since they're the ones feeling tingles running up their legs.

Yet even they'll figure out that the Chicago Way runs along Pennsylvania Avenue, once the Hopium wears off and the tingling stops. It'll probably take about eight years for their heads to clear.

In the meantime, all last week, the ludicrous Angry-Democrat-vs.-Greedy-AIG slapstick was highly entertaining, except when you realize the premise of the joke is that American taxpayers are so stupid we'll believe anything.

House Speaker Nancy Pelosi announced she'd tax those arrogant AIG guys and take the money back. This is the same Pelosi who is extremely wealthy, worth millions, yet she jets coast to coast on weekends on your dime, because she's the speaker. Why doesn't she buy her own jet and have the unemployed AIG guys serve drinks to the real estate lobbyists?

At her news conference Thursday, Pelosi became so upset over AIG questions that she cut off reporters by saying, "New subject, or else," and naturally, being under the influence of primo Hopium, they changed the subject.

But all this false congressional outrage and shrieking and fingerpointing should be understood for what it really is: Political buttocks-covering by Democrats who are worried about the 2010 elections, and afraid of losing their greatest symbolic weapon: The Evil Rich Guy.

That's another cartoon, like Mr. Burns on "The Simpsons," who steps on the backs of the humble working man. Now, though, the Democrats aren't fighting Mr. Burns, they're giving him a boost so he can step on our necks with a pair of snazzy AIG loafers.

What they're trying to drown out with all their screaming is that the Democrats knew all about the $165 million to the AIG suits. And the Obama White House knew all about it too.

In fact, it was a rather brave New York Democrat, Rep. Joseph Crowley, who asked Geithner about the AIG bonuses in a hearing before the House Ways and Means Committee. Not yesterday, or a couple days ago, but on March 3.

"Just last month," Crowley told Geithner, "AIG paid 343 employees of AIG FP—their Financial Products division that created the financial hole that AIG is in, and in turn a multibillion-dollar bill for American taxpayers—$56 million in bonuses and are slated to pay an additional $162 million in bonuses to 393 participants in the coming weeks," Crowley said."And there's more," Crowley said. "Further bonus payments totaling approximately $230 million are due to 407 participants at AIG's Financial Products division in March 2010. This makes no sense to my constituency."

Sadly, it makes perfect sense back here, where we get only that weak schwag Hopium. They cut the deal in some back room, and Geithner is being measured as the fall guy. It sounds just like Chicago's City Hall.

Stunned is the word.
jskass@tribune.com
Posted by jtf at 10:01 AM