The first two months of the Age of the Hopeychange have been unexpectedly inept.
By Mark Steyn
Syndicated columnist
Orange County Register
http://www.ocregister.com/
Friday, March 20, 2009 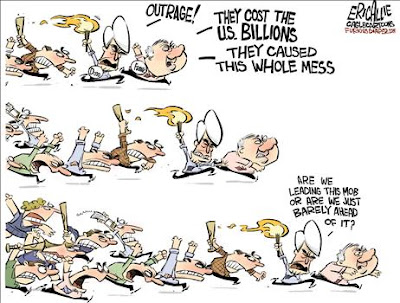 Are you outraged by these AIG bonuses?

No, no. For Pete's sake, you're an A-list congressional big shot. Try to get a bit of feeling into "outraged." The president's teleprompter puts it in italics, bold, capitalized and underlined: OUTRAGED !

That's better. Don't forget to furrow your brow and fume. No, not like a camp waiter when you send back the arugula salad drizzled in an aubergine coulis. We're looking for primal, righteous anger: You're outraged, OUTRAGED that bonuses are being handed out at companies the American taxpayer is bailing out. Yes, to be sure, the bonuses were specifically provided for in the legislation, but, like all busy senators and congressmen, you don't have time to read every footling trillion-dollar bill before you vote in favor of it. And yes, true, the specific passage addressing these particular bonuses was, in fact, added to the bill in your name, but that was nothing to do with you – you just did that because the White House asked you to, and just because their people called your people and some intern in your office drafted some boilerplate with your name on it is no reason for you to be denied 10 minutes of grandstanding on MSNBC. It's an outrage to suggest you're anything other than outrageously outraged!

To his credit, the hopeychanger-in-chief has had some difficulty doing the outrage kabuki with a straight face. In the middle of his press conference the other day, he got a tickle in his throat and departed from his telepromptered script to joke: "Excuse me, I'm choked up with anger here." How the assembled hacks laughed! Why, it was almost as funny as his gag on "The Tonight Show." Referring to his 129 score at the White House bowling alley, the president cracked that "it was like the Special Olympics." Ha-ha! What a card that Obama is when he unplugs the prompter and kicks loose a little. Maybe next time he can toss in that the Dow Jones has got "Down" syndrome – geddit? Oh, come on! Don't be so uptight and politically correct!!! And besides, anyone who says the president shouldn't be doing crip jokes is a racist.

Frank James of the Chicago Tribune criticized the president's bon mot more in sorrow than in anger: "Obama seems to be a fairly sensitive and compassionate man who wouldn't purposely set out to offend the disabled."

Are you sure about that? He might be "a fairly sensitive and compassionate man." Alternatively, he could be a mean, self-absorbed S.O.B. who regards anyone other than himself as intellectually disabled. The truth is we don't know, because in the course of the presidential campaign the press declined to do even the most elementary due diligence on him. And, like Congress with the stimulus, the electorate didn't bother to find out what's in there before they voted for it.

Still, on the basis of its first 60 days, this is a very odd presidency. In between appearances on Jay Leno and his "March Madness" picks, Barack Oprompta also found time to compare AIG executives to suicide bombers:

Right. It's like you're at the Jay Leno post-show party and suddenly you notice this AIG vice-president has wandered in, with six figures of bonus strapped to his waist, and he's yelling "Allahu akbar!," which is Arabic for "I'd like to deposit this in my Cayman Islands account."

Maybe Obama's teleprompter had a wild night on the tiles and inserted his terrorism speech into the middle of his bonus outrage. But, if not, we now know why the White House announced that they'll no longer be using the term "enemy combatants" for the Gitmo crowd. They're reserving that designation for AIG execs, most of whom will shortly be extraordinary-renditioned to Saudi Arabia where a touch of the old electric cattle-prods should soon have their bowling scores heading south.

Any sentient being dumb enough to fall for this AIG huffin' an' a-puffin' from Barry, Barney, Doddy and the gang is a fool who deserves the vaporization of his assets that the national political class is lining up for him. As Charles Krauthammer pointed out, the $165 million in bonuses is less than 1/18,500th of the $3.1 trillion budget. The massive expansion of government the president is planning is forever, and will ensure you that end your days in what Peggy Noonan calls "post-prosperity America." More immediately, what message do you send to the world when legal contracts can be abrogated by retrospective confiscatory bills of attainder? You think that's going to get anyone investing in America again?

The investor class invests in jurisdictions where the rules are clear and stable. Right now, Washington is telling the planet: In our America, there are no rules. Got a legally binding contract? We'll tear it up. Refuse to surrender the dough? We'll pass a law targeted at you, yes, you, Mr. Beau Nuss, of 27 Plutocrat Gardens, Fatcatville. If you want a banana republic on steroids, this is great news. So cheer on thuggish grandstanding by incompetent legislators-for-life like Barney Frank if you wish. But, in any battle between the political class and the business class, you're only fooling yourself if you think it's in your interest for the latter to lose.

The first two months of the Age of the Hopeychange have been an eye-opener. I expected it to be ideologically distasteful to me, but I didn't expect it to be so inept. Not because I had any expectations of President Obama's executive skills. But I assumed he'd have folks around him who could take care of details like governing, while he pranced around as the smiley-face hopeychange frontman. But the bench is still empty save for a handful of mediocrities. And the disconnect between the smoothly scripted mush and what's actually happening makes the telepromptered cool look even more ridiculous.
Posted by jtf at 9:45 AM