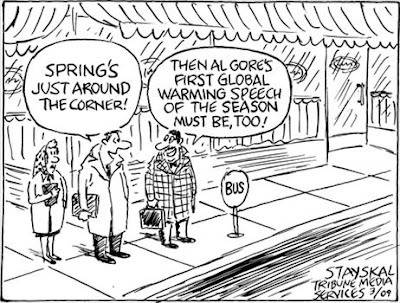 WASHINGTON -- Thank God winter is almost over. It has been another cold one. I hope Al Gore wore his hat and brought along his galoshes whenever he made an appearance against Global Warming. Better yet, I hope he scheduled his jeremiads in warmer climes, say Miami Beach or Antigua. As I reported a while back, scientists have not been able to measure any increase in global warming since the end of 1998. That, despite their lunkheaded computers forecasting the opposite. Over the past two years temperatures have actually dropped by more than 0.5 degrees Celsius. Button up!

I mention all this because 1) it is always amusing to kid Mr. Gore and 2) the price tag for Prophet Obama's climate plan has just jumped to $2 trillion. That is three times the White House's initial estimate for its Cap-and-Trade monstrosity. It is also a huge tax on corporations and consumers at a time when both are in recession. Only government thrives. Given the fact that it is increasingly unclear that there is such a thing as Global Warming and the fact that Cap-and-Trade is an expensive and dubious remedy for it might not the Prophet Obama hold back. He has plenty else to do.

Cap-and-Trade has been tried in Europe by the signers of the Kyoto Protocol and according to the Heritage Foundation's Ben Lieberman, "Nearly every European country participating has higher emissions today than when the treaty was first signed in 1997….emissions in many of these nations are actually rising faster than in the United States." Yet perhaps the Obama Administration has its eye on something other than limiting emissions. Possibly it sees Cap-and-Trade as a great way to gain control of still more of the private sector.

As mentioned above, the huge amount of money mulcted from the private sector and handed over to the public sector has got to please every collectivist in the White House. Moreover there is the huge bureaucracy that will have to be set up to oversee Cap-and-Trade. Those of us who have followed the economic crisis and the Ponzi schemes of Bernard Madoff are familiar with the Securities and Exchange Commission (SEC). If the Administration's climate legislation is passed, we shall have the Cap and Trade Commission (CAP). It will be vast.

In this setup there will be countless opportunities for corruption as polluters try to bribe CAP's agents, or the agents try to elicit bribes. As with the SEC, there will be incompetence and lax enforcement. Finally, there will be senators and members of Congress making special pleadings for corporations in their regions, labor unions, special pleaders of all sorts.

The Prophet Obama was very disturbed recently when asked if he was a socialist. Socialism is government control of the means of producing and distributing goods and services. What I have just described is a powerful instrumentality toward socialism. Along with Cap-and-Trade, the Obama Administration is calling for a sufficient number of these instrumentalities to socialism that by the next election the United States will be very close to being a socialist state. There is no point in Obama arguing against that observation. He ought simply to come out and say it. He is for socialism. What could possibly be wrong with that?


Bob Tyrrell is founder and editor in chief of The American Spectator. His books include the New York Times bestseller Boy Clinton: the Political Biography; The Impeachment of William Jefferson Clinton; The Liberal Crack-Up; The Conservative Crack-Up; Public Nuisances; The Future that Doesn't Work: Social Democracy's Failure in Britain; Madame Hillary: The Dark Road to the White House; and The Clinton Crack-Up.

Bob is also an adjunct fellow of the Hudson Institute and was until its demise a contributing editor to the New York Sun.
Posted by jtf at 5:56 AM