FACING a postconvention fall in the polls, John McCain once again reshaped the dimensions of the race by suspending his campaign and calling for postponement of Friday's debate.

This bold move could have an impact on the race akin to McCain's choice of Sarah Palin as his running mate. Defensively, McCain had to act to stop the fall in his poll numbers. 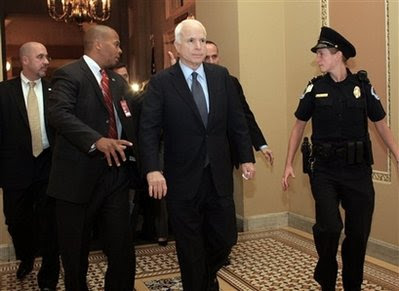 Offensively, he has placed himself at the epicenter of the only issue on the national agenda - proactive action to stop a total international financial collapse.

Obama's response to McCain's initiative is lame. As with his initial reaction to Sarah Palin, Obama has miscalculated. While he tries to spin McCain's move as a mere response to his initiative, it was the Republican who first issued the call for a suspension of the campaigns.

Both McCain and Obama will now go to Washington. McCain on his own initiative. Obama as a result of the president's call for an economic summit.

But it is McCain who will play the proactive role. Obama will come to Washington, but will keep one foot outside the Beltway.

Even though the president has called both candidates to Washington to save the country, Obama continues to campaign. Politics as usual.

He doesn't want to cancel the debate. He would debate while the markets burn.

McCain is going to work while Obama is phoning it in.

Oddly, McCain and Obama agree on the bailout package. But it is only McCain who can pass the bill. Only McCain can deliver the administration and the Republicans.

McCain will be at the center of the process, managing it through to success while Obama lingers on the outskirts, irrelevant and uninvolved.

McCain will pass Barack Obama's bill (which parallels his own proposals), and will get the credit for it.

There are compelling reasons why McCain may be saving his campaign by this bold move.

McCain's entry into the legislative foray personalizes the economy issue.

As long as McCain stayed away from Washington, it was the Democrats against the Republicans. Polls give the Democrats the edge. But voters trust McCain personally more than they trust Obama to manage his way out of a crisis.

By showing up in Washington, McCain makes the issue personal, not partisan.

Once the bill is passed, McCain will have the credentials to go on the offensive and warn of the impact of Obama's tax increases on the recovery.

Had McCain not acted, Republican opposition to big government might have doomed the economy and destroyed Republican hopes.

By going to Washington, McCain makes it imperative that the Republicans pass the legislation. His presence makes it an issue of party survival in a way that lame duck Bush could never do.

As Woody Allen said "half of life is just showing up."
Posted by jtf at 10:31 AM