How 'Seinfeld' Mastered the Comedy Domain 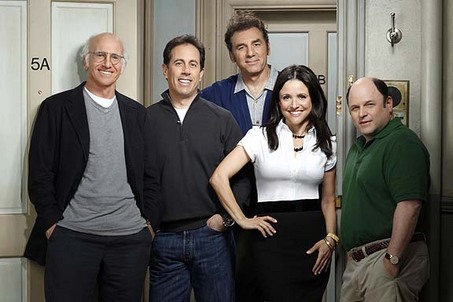 I can’t say whether Larry Charles, Larry David, Alec Berg, Spike Feresten, and the rest of the brilliant writers of Seinfeld were students of F. Scott Fitzgerald, but they might as well have been. Fitzgerald supplied the best advice for sitcom writers:

Do not say “Seinfeld was a show about nothing” — not in my vicinity, not if you wish to go unbusted in the chops. There could hardly be a more obtuse notion. It would be closer to the truth to say Seinfeld was a show about everything, or everyone, every queer fish in a city that has forever been a leading producer of them. Other sitcom writers labored to create jokes; Seinfeld writers sat around discussing things that had happened to them that day, on the way to work or in line at lunch. A former David Letterman writer remembered that, just around the corner from his office at the Ed Sullivan Theater, there was this strangely ill-tempered fellow who sold soup . . .
All four of the lead characters on Seinfeld were closely modeled on real people. Two of the four characters even carried the names of the people they were based on. True to his reputation, Kenny Kramer started capitalizing on the show with a wacky scheme. He used to have a billboard posted about his bus tour, opposite the storefront held by the Soup Nazi. (Sorry — Soup Man.)


Friends, that other mega-successful NBC sitcom of the ’90s, was set in a denatured, Los Angeles–imagined fantasy of New York City unrecognizable to anyone who lived within 100 miles of Central Park. Its jokes derived not from human foibles but from the grinding gears of a comedy-writing machine. Setup, punch line. Setup, punch line. At any moment, there might be as many as three characters out of six (Phoebe, Joey, Monica) whose comedic function was to stupidly misinterpret the last thing that was said. Once you’ve noticed such a tic, an easy-going show becomes hard to sit through.
Seinfeld, which debuted 30 years ago this month on NBC under the title The Seinfeld Chronicles and today streams on Hulu, blew up the sitcom by declining to pander to the supposed expectations of an audience studio execs firmly believed was barely paying attention and under no circumstances wanted to think. By the time the show really started to hum in its third season (1991–92) — the first time it dazzled me was with an out-of-nowhere parody of the conspiracy theory at the heart of Oliver Stone’s JFK, which was then in theaters — you could tell the writers were doing what they thought was funny, not serving up slop for the masses. If non–New Yorkers didn’t get it, Seinfeld didn’t care. If dumb people didn’t get it, Seinfeld didn’t care. Everyone I knew in New York was watching it in 1992 and thinking, “At last, a show set in New York that’s actually about us! They’ll never get this in the heartland.” The following season it was the third most-watched show on TV, and for the rest of its run it never finished a year below second. Along with Sex and the City, which launched in 1998, it changed the one-word perception of New York City from “dangerous” to “fun.”
If the show centered on characters, its chief subject was mores, or etiquette. Etiquette is a Sierra Nevada of comedy gold, and nobody else had staked much of a claim on it. Should a note making reference to the arrival of a baby employ an exclamation point? What is the minimum distance someone should maintain while engaging in conversation? Is it okay to sleep with the cleaning lady at work? Should you spare a square for your desperate neighbor in the adjoining bathroom stall? Can you re-gift a present? Seinfeldian misunderstandings are grounded in reality, not the contrived dumb-guy misconstructions of Friends’ Joey Tribbiani.


In an exchange related almost verbatim in episode ten of season five, one Seinfeld writer asked a Chinese postman if he knew where a nearby Chinese restaurant was, and the postman took this as a racial inference. But the writer didn’t think Chinese people knew where all the Chinese restaurants are, he thought letter-carriers knew. Such is the fractious nature of this city and its inexhaustible pool of umbrage. Seinfeld captured it beautifully, in the Talmudic spirit of tearing a situation apart from every angle, with such concision that it popularized lots of neologisms and phrases for its various embarrassments and predicaments. Close-talker! Double-dipper! Shrinkage!
Coming up with a catchphrase that actually catches is a feat few writers can ever hope to achieve, but on top of having come up with so many, Seinfeld gets far too little credit for the unprecedented density of its plots, which as the series went on became the most intricate of any comedy series ever seen on the networks. Again dispensing with the suits’ wisdom about the degree to which the audience was paying attention, the writers of the show’s later years successfully intertwined four plots per episode, each of them with its own twists, bringing them together with a hilarious conclusion. A touch of farce decorated the observational comedy at the core of the show.
Though the last couple of episodes slipped a bit (the one about the Puerto Rican Day Parade didn’t work, nor did the May 14, 1998, finale), Seinfeld delivered more 30-minute classics than any TV comedy except The Simpsons. The show about almost everything skirted only one notable topic: race. An episode that was to begin with George saying, “I have never seen a black person order a salad” was nixed by the NBC suits. Even one of the most inventive gangs of writers ever assembled for television could not be allowed to grapple with the world’s touchiest subject, and we’re all the poorer for it.
What’s the deal with network censors?