A Tight and Tangled ‘Collusion’ Web 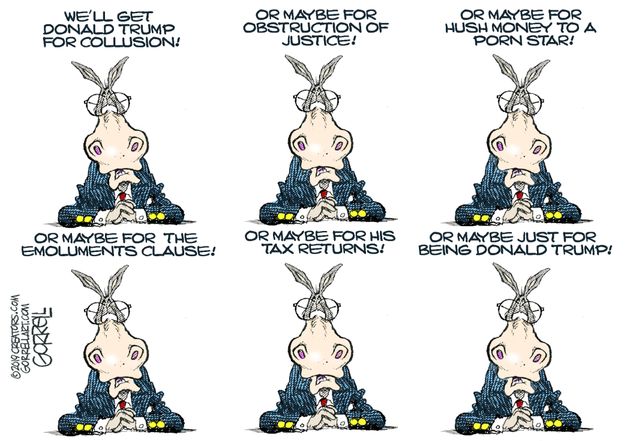 Most people reading this will know Sir Walter Scott’s famous couplet (from the narrative poem Marmion):

Oh, what a tangled web we weave
When first we practise to deceive!

Less well known, but undeservedly so, is the excellent completing couplet by J. R. Pope, published under the sly title “A Word of Encouragement”:

But when we’ve practiced for a while,
How vastly we improve our style!

Indeed. You really have to give it to the suits in Barack Obama’s intelligence services and Department of Justice (many of whom, of course, are still strutting about in Donald Trump’s administration). It was quite a web they wove, and tangled with complexity. Yet their prodigious practice also made it nearly impenetrable to anyone not inside their charmed circle.
That adamantine carapace of impenetrability is a sign of their high style, their assiduity, the reason that a “word of encouragement” did not come amiss.
Put your hand on your heart. Can you really tell me what happened and who all the major players are in the Get Trump farce that has been occupying the nation for more than two years now? There have been various worthy efforts to unpack the drama—I’ve made a few myself—but at bottom it is like Russia according to Winston Churchill, “a riddle, wrapped in a mystery, inside an enigma.”
Part of the problem is the shifting roles of the main players. Or rather, the shifting roles that elevate one or more players at one moment only to demote them back to the chorus a week or two later. How many people were suddenly cast into starring roles only, a few days or weeks later, to find themselves pushed back into bit-player status? George Papadopoulos: remember him? For a brief shining moment, he was the key to the whole “Russian Collusion” mythos. The New York Times told us so. But after he strutted and fretted his hour upon the stage he faded from sight and now is heard no more.
It’s the same with so many other characters—the Russian lawyer who one moment was supposed to have provided the smoking gun for the whole investigation, finally nailing Donald Trump, Jr. if not Sr., but she too sang her one aria and was pushed back to the room marked “Extras.”
Nevertheless, there are a few actors in this Gesamtkunstwerk who, though they started slowly, have exhibited surprising resilience and staying power.
Consider the unlikely power couple Bruce and Nellie Ohr.
As I recall, they first popped up on the radar screen during those heady weeks that brought Andrew McCabe, former Deputy Director of the FBI, and the love birds Peter Strzok, head of the FBI’s counterespionage division, and Lisa Page, an FBI lawyer who worked seriatim on the faux-investigation into Hillary Clinton’s emails, the Russia investigation, Robert Mueller’s grand fumigation team, and was also Andrew McCabe’s conduit to the press for the purpose of leaking sensitive information to sympathetic journalists.
McCabe was fired. So was Strzok, but not before his text duet with Page in August 2016:

Page: [Trump’s] not ever going to become president, right? Right?!
Strzok: No. No he won’t. We’ll stop it.

Public service is a marvelous thing.
Any Day Now
We’re just about out of popcorn for this entertainment. It’s difficult, even for specialists, to keep the whirling kaleidoscope of personalities straight. Once again, for about the tenth time, Robert Mueller is said to be almost, nearly, just about finished with his investigation into—into what? It’s hard to say. Tax evasion decades ago. Working as an unregistered agent for a foreign power (but not, as it turns out, Russia). Misspeaking to the FBI (why does anyone ever talk to the FBI?). And what was it that the jester Roger Stone is supposed to have done? Something very serious, one presumes, to earn a pre-dawn, swat-team enforced, guns-drawn raid on his house.
Maybe we’ll be notified soon that the report is on its way to the attorney general. Maybe some bits of it will be made public. It was supposed to be Friday. But then again, it was supposed to be a couple of months ago, last fall, over the summer. . . . The Mueller Report is a little like that sea battle Aristotle talks about in disabusing us of too-simple a view of necessity: either the battle will take place tomorrow or it won’t take place tomorrow. It would seem that both statements cannot simultaneously be true. This is where the distinction between the potential and the actual comes in. Also contingency: the most humbling reality that our quest for certainty faces. Things happen. When they do, we know, but our knowledge is always glimpsed in a rear-view mirror, never, really, in the road ahead.
But I digress. The news today—well, Friday, really—is that Doug Collins, ranking member of the House Judiciary Committee, released, motu proprio and sua sponte, a transcript of the committee’s interview with Bruce Ohr in August 2018. There are some interesting tidbits in the 250-plus page document. Anyone who has been following this production of “The Mousetrap” knows that Christopher Steele, the former British spook who compiled the infamous dossier of dirt on Donald Trump for Hillary Clinton, was fired by the FBI for leaking material to the press.
But Ohr’s testimony confirms what was suspected, that his firing was no impediment to getting material from Steele to the FBI. Bruce Ohr provided “back channel” access. And his sources were good: his wife, for example, did anti-Trump research for Fusion GPS, which had hired Steele.
For reasons that are mysterious, but not really, Bruce Ohr is still employed by the Department of Justice (though demoted), despite his having failed to report that his wife was working for Fusion GPS. The web, you see, is tangled!
“She provided me with a memory stick,” Bruce Ohr said of his wife, “that included research she had done for Fusion GPS on various Russian figures. And the reason she provided that information to me is [that] . . . . it related to the FBI’s Russia investigation. And she gave me that stick to give to the FBI.” Why didn’t Nellie give the flash drive to the FBI herself? Former Congressman Trey Gowdy (R-S.C.), one of those questioning Ohr, wondered that, too.

Mr. Gowdy: Well, all marriages are different, so I’m trying to envision this cold start to a conversation with, “Here, honey, here’s a thumb drive.” There were no conversations before that?
Mr. Ohr: Well, Nellie was present with me in the end of July, when I first heard Russia information—information relating to the Russia investigation from Chris Steele. So she was present for some of that conversation. So she was certainly aware at that point that Chris Steele was giving me some information about Russia. At some point, I don’t remember when, I became aware that she was looking at some of the same figures as part of her work for Fusion GPS.

And on it goes. Shadowy Russian magnates. Lots of Christopher Steele. Lots of Fusion GPS.
To the Center
Doug Collins said he plans to release additional transcripts, with the minimum redactions necessary for national security, of other interviews—with Lisa Page, for example, and Peter Strzok, and Nellie Ohr.
Why now? Collins explained that his patience had “grown thin” with the Justice Department. They have had the transcripts for months but refused to release them. Why?
It think it all comes back to weaving that web and keeping it tight. A few days ago, we got the news that Paul Manafort was sentenced to “only” 47 months in the slammer. Mueller’s prosecutors were disappointed. They were hoping for 24 years. There is always next week, though, when Paul Manafort comes up before a different (and Obama-appointed) judge who is expected to throw the book at him. Then it will be party time for the prosecutors, who can rejoice that they really have utterly destroyed another victim.
I have no brief with Manafort, who seems to be a pretty slimy operator. But, as Andrew McCarthy just noted, he was one of many such “consultants.” Moreover, Manafort’s financial malfeasance had nothing to do with Russia. He was working for people in the Ukraine, not Russians. But why is Manafort and not other such consultants charged—his partner Richard Gates, for example?
This brings us to the center of the web. As I and others have often had occasion to observe, neither Paul Manafort nor anyone else in this star-studded show would have caught the eye of Robert Mueller had Donald Trump not been, first, a stronger candidate than expected and, second, had he not had the temerity to win an election he was declared to have lost before the voting began. Indeed, not only would no one have caught the idea of Robert Mueller, Mueller would not now be traipsing around with the title special counsel.
Andy explains it thus: “Understand: Paul Manafort would never have been prosecuted if he had not joined Donald Trump’s campaign. He would not have been prosecuted if Hillary Clinton had won the 2016 election and spared Democrats the need to conjure up a reason to explain their defeat.”
And it’s not just Manafort who would still be sporting ostrich-skin jackets. Andrew McCabe, Peter Strzok, Lisa Page, John Brennan, James Comey, James Clapper, and the rest—they all would be up to their old tricks instead of wallowing in various states of disgrace and likely indictment. Had Hillary Clinton become President, all illegal surveillance and FISA warrants against Trump proxies would have been quietly swept under the rug and the Clinton Foundation would still be doing big business.
As it is, several people close to Donald Trump have suffered from that proximity, not because of any “collusion” but simply because they offered convenient scalps that might plausibly lead to the chief scalp, Donald Trump’s.
So far, it hasn’t worked out that way, and from all accounts Mueller’s report will be but a tissue of innuendo with no crimes charged against the president. That indeed is why Jerry Nadler and other Democrats are revving up alternative schemes to hobble and ultimately destroy him. It wouldn’t surprise me at all if impeachment documents were drawn up. It would surprise me greatly were they taken seriously. The chance of their passing the Senate with a two-thirds majority are vanishingly small.
But of course that is not the end of the story. The web spinners are still hard at work. So are the miners, looking for ever deeper shafts into which they can bury news of the complex plots to frame first candidate and then President Trump. The fact that Representative Devin Nunes (R-Calif.) is no longer head of the House Intelligence Committee is a great asset for them.
Working strongly against them, however, is this still under-appreciated development: Donald Trump now has a competent and unhampered attorney general. As will soon become clear, it is not only people on Paul Manafort’s side of the aisle who should be advised to put their affairs in order.
Posted by jtf at 10:22 AM