Just say no to Veganuary


Veganism isn't a diet - it's a cult of purity

In case you hadn’t noticed, this January has otherwise gone by the name of ‘Veganuary’, a month in which we have been exhorted to forgo the consumption and usage of animal products. Or perhaps that should be ‘Smuguary’, ‘Selfrightuary’, ‘Egotistuary’, or any other comparably ungainly neologism. Because such terms would encapsulate the fad du jour, veganism: a narcissistic cult and exercise in self-regard in an age of identity politics.


One report from Plymouth this month betrays the essence of the movement. One 23-year-old declared himself all in a swoon after a branch of Pizza Hut mistakenly served him dairy ice-cream purporting to be vegan-friendly. ‘This is appalling. I am outraged, heartbroken in fact. I feel like my lifestyle has been mocked. It’s a mistake that shouldn’t have happened’, said the vegan. Pizza Hut responded with a grovelling apology.
The indignancy on display by our vegan is not incidental, nor is it unusual. It is intrinsic to a movement that has appropriated and commandeered the ethics of similarly superior and sanctimonious anti-human worldviews: the animal-rights movement and militant environmentalism. Veganism has become a kind of umbrella alliance of malcontents who sermonise that eating or wearing animals is not only cruel, but also a violation of the rights and dignity of non-human beings, while also being bad for the planet.
Vegans can thus denounce eating eggs, drinking milk or wearing wool as not just wrong, but thrice-times evil. This is why vegans are not content quietly to forego certain foods, as is the case with most civilised vegetarians, but feel the need to evangelise about why they do so, condemning as wicked and immoral those deviants who don’t. 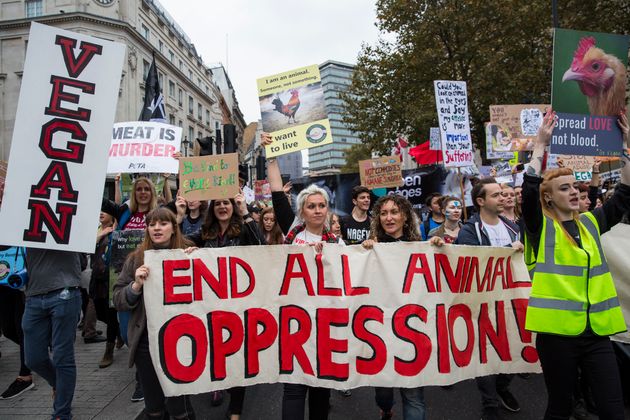 One means to demonise the impure, demonic unbeliever is the street protest, usually against shops that sell fur, where activists repeat slogans such as ‘compassion not fashion’. On New Year’s Day, animal-rights activists in Toronto protested against newly inaugurated Brazilian president Jair Bolsonaro, who plans to privatise parts of the Amazon rainforest. They staged a ‘die-in’ near the Brazilian consulate, performing a play called ‘If the Amazon rainforest dies, we all die!’. A similar tactic is plain hooliganism. ‘They are serving many animals in that restaurant, many animals that did not want to die thrashed and screamed for their lives’, pronounced one protester in October, when he and other animal-rights activists stormed a restaurant in Perth, Western Australia.
Militant vegans stalk the internet looking to ‘meat-shame’ clean-eating and vegetarian food bloggers who post pictures of recipes containing eggs or milk. They are singled out on account of their moral vacillation. With that dreadful joy of vengeance, these outrage goblins declare, ‘My food didn’t die screaming’ or ‘Fur is worn by heartless hags’.
Humour is not tolerated by these believers, as was made evident when Waitrose Food magazine sacked its editor, William Sitwell, after he made jokes about killing vegans. Nor do they have a sense of their own ridiculousness, as we saw last month when PETA issued a list of animal-friendly alternatives to traditional sayings, such as replacing ‘kill two birds with one stone’ with ‘feed two birds with one scone’.
Many of you may have been tempted to take up the ‘Veganuary’ challenge on ethical or dietary grounds. This is an error. Both criteria can be satisfied by simply going vegetarian: you would have the satisfaction of knowing that your diet doesn’t involve the death of animals, and still easily be able get all the protein and calcium your body needs. A vegan diet, on the other hand, isn’t good for body or soul. It will only turn you into a coffin-faced bore.
But that’s never been the point of it. Being a vegan is foremost about proving that you are a purer, morally better person than your neighbour, and letting her know it. It’s a cult of self-worship.
Posted by jtf at 8:43 AM

Email ThisBlogThis!Share to TwitterShare to FacebookShare to Pinterest
Labels: Health, Media and Culture