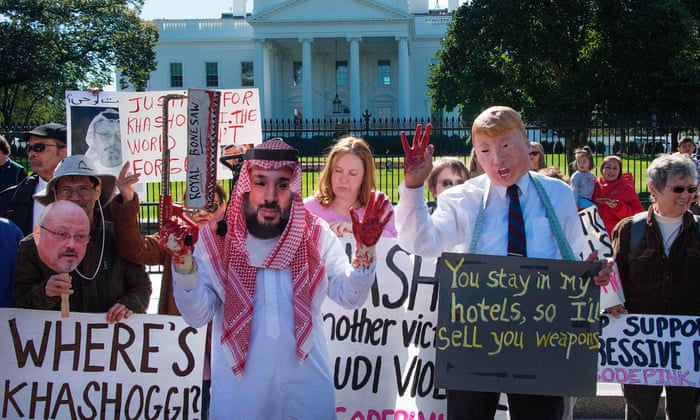 In the playpen that has become our politics, feelings are everything. It doesn’t matter what the facts are, only the emotional effect those facts and their attendant consequences might have on the party holding the short end of the stick. Lose an election? Whine and sue. Don’t like the notion of a sovereign nation defending its borders from an attack using non-lethal means? Emotionalize and propagandize a picture of a mother and her children fleeing. Everything must have an emotional component, behind which lies the unspoken accusation: how would you like it if this happened to you?
Nor are international affairs spared this childishness. The gory murder of a non-American Muslim in the capital of a Muslim country by a group of Muslim assassins from another Muslim country has somehow been transformed into an American problem. Why should that be? The decedent in question occasionally wrote propaganda pieces disguised as journalism for a preening American newspaper in Washington, D.C., whose motto is “Democracy dies in darkness.” In fact, what died in the darkness of the Saudi embassy in Istanbul was Jamal Khashoggi, a Saudi national of whom no one in the Western world had heard until a month ago.
Cue the crocodile tears: the reflexively anti-Trump, crudely reductionist, historically ignorant American media immediately transformed a rather ordinary Arab bit of bloody business into the greatest crisis since the Perdicaris Affair, and ever since the murder has stamped its tiny feet, demanding that the United States immediately “punish” the Saudis for a crime committed on sovereign Saudi diplomatic territory in the Turkish capital. Part of this is phony professional solidarity based on the most generous possible interpretation of Khashoggi’s real occupation of Muslim Brotherhood activist and anti-regime agitator as that of “journalist.” The other is rather more complex.
Friends, Frenemies, and Enemies
In the media sandbox, the entire geopolitical situation must be judged by the ideological sympathies of the institutional players du jour.
During the Obama Administration, whose foreign-policy bureaucracy was staffed by the same kind of like-minded Ivy Leaguers who populate the leftist pundit class, it was natural for the media to root for the John Kerry-Samantha Power-John Brennan school of America Last, and in particular for the so-called Iran nuclear deal framework, which turned American policy decisively in favor of the Shiite Iranians over the Sunni Saudis. Never mind that Obama once publicly bowed to the Saudi “king”—our money, including pallets of cash, went where his heart was: Iran.
Never mind as well that Islamic Iran has been, since the hostage crisis of Jimmy Carter’s administration, an implacable foe whose people and leaders shout “Death to America” with soporific regularity. Under Obama, America tilted away from our traditional frenemies, the Saudis, toward an avowed enemy, and paid them for the privilege of giving them what they wanted.
Donald Trump’s perfectly sensible restoration of the U.S.-Saudi alliance, as morally odious as that alliance is (Saudis made up the bulk of the 9/11 hijackers, and yet you never heard the Left call for punishing the kingdom in 2001), represents not simply a return to the status quo ante, but an explicit rejection of  Barack Hussein Obama’s “legacy,” and thus must be fought against with the passion of the defeated segregationist South battling for the Lost Cause.
Enter, at last, the grownup in the romper room: secretary of state Mike Pompeo, who set the record straight regarding Democrats’ “caterwauling” over Khashoggi in the Wall Street Journal on Wednesday:

Is it any coincidence that the people using the Khashoggi murder as a cudgel against President Trump’s Saudi Arabia policy are the same people who supported Barack Obama’s rapprochement with Iran—a regime that has killed thousands world-wide, including hundreds of Americans, and brutalizes its own people? Where was this echo chamber, where were these avatars of human rights, when Mr. Obama gave the mullahs pallets of cash to carry out their work as the world’s largest state sponsor of terrorism?
Saudi Arabia, like the U.S.—and unlike these critics—recognizes the immense threat the Islamic Republic of Iran poses to the world. Modern-day Iran is, in Henry Kissinger’s term, a cause, not a nation. Its objectives are to spread the Islamic revolution from Tehran to Damascus, to destroy Israel, and to subjugate anyone who refuses to submit, starting with the Iranian people. An emboldened Iran would spread even more death and destruction in the Middle East, spark a regional nuclear-arms race, threaten trade routes, and foment terrorism around the world… Abandoning or downgrading the U.S.-Saudi alliance would also do nothing to push Riyadh in a better direction at home.

As Pompeo knows, great-power politics are not to be subjected to the moralistic whims of the emotionally weakest members of the body politic. The modern Left, which has shorn itself of its do-gooder, midwestern Protestant origins and is now wholly godless, nevertheless still uses our founding religious scruples against us, in line with Alinsky’s famous Rule No. 4: “Make the enemy live up to their own book of rules. You can kill them with this, for they can no more obey their own rules than the Christian church can live up to Christianity.” (The “Christian church” bit is a nice, characteristic and indicative cultural-Marxist touch.)
Time was all politicians understood this. Living in the tough neighborhood known as Planet Earth, all countries must eventually lie down with the devil, jungle up with some pretty ripe characters, and hope to muddle through with as much of their dignity as possible, but not one shred more if it defeats the larger objective. As we become increasingly infantilized, however, the idea that great political decisions often must be separable from domestic moral considerations becomes ever harder to explain.
“That’s not who we are,” sobs the Left as it gleefully indulges its reflexive anti-American nature. What they forget is that actions speak louder than words, and that it is in the best interests of the United States at the moment to pretend to like the Saudi “monarchy” even as we do our best to undermine it—“the crown prince has moved the country in a reformist direction, from allowing women to drive and attend sporting events, to curbing the religious police and calling for a return to moderate Islam,” wrote Pompeo, patting the Kingdom on the back for doing the very things that will help bring it down.
As Mikhail Gorbachev found out, glasnost led to perestroika which led to Christmas Day 1991, the day the Soviet Union vanished onto the ash heap of history. The death of Khashoggi is an internal Saudi affair, with some repercussions for its relationship with its other rival for Islamic supremacy, Turkey: it is, literally none of our business. And as all kindergarten teachers used to know, sometimes you have to kill the little monsters with kindness.
Posted by jtf at 7:04 AM