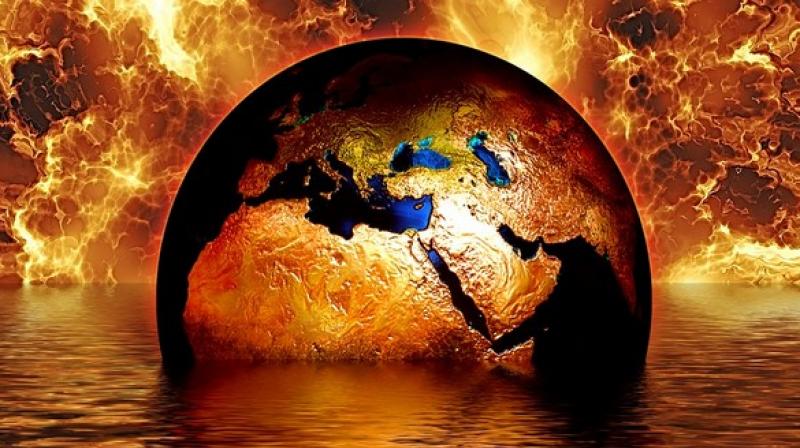 
A new report from the Intergovernmental Panel on Climate Change offers a timely reminder that much of the Left’s doomsday hysteria can be traced to the modern-day environmental movement. Like Democrats’ dire warnings that everything from tax cuts to net neutrality will result in mass casualties, the climate cabal’s Grim Reaper estimates are not just wrong and constantly changing—they defy reality.


Ever since Donald Trump wisely scuttled the meaningless Paris Climate Accord last year, climate alarmists have been desperate to revive the public’s interest in this once-dominant political issue. As concern about climate change has waned, the activists who are determined to use it as leverage to exert more state control over our lives have downgraded the planet’s prognosis once again.
The IPCC now warns that if the rise in global temperatures is not limited to 1.5 degrees Celsius over pre-industrial estimates, millions of humans will suffer a horrific fate beginning in 2040. Most scientific agencies that track climate change insistthe Earth’s temperature has already increased just shy of 1 degree C since the late 1800s and blame human activity for most of the rise.
That means, according to the IPCC, we only have another half a degree Celsius to go before we all fry, drown, or starve.
Urgent action is needed immediately, according to this international group of experts, to reduce carbon emissions and mitigate “the risks to health, livelihoods, food, water, and economic growth, especially in rural landscapes and urban areas” around the world. Never mind that this will require personal sacrifice, social and economic upheaval on a global scale and—of course—trillions of dollars:

Pathways limiting global warming to [1.5 C] would require rapid and far-reaching transitions in energy, land, urban and infrastructure and industrial systems. These transitions are unprecedented in terms of scale and imply deep emissions reductions in all sectors, a wide portfolio of mitigation options and a significant upscaling of investments in those options.

Eliminating the use of coal, boosting the use of capricious sources of renewable energy, and actually removing carbon from the atmosphere are a few of the solutions they propose. (The group, however, continues its unscientific and fearmongering objection to the cleanest form of energy, nuclear power.)
Now before you doze off at the latest Malthusian threat by global eco-warriors, it’s important to take note of the 1.5 C number because it is much lower than the previous scare number of 2 C, which was the targeted limit in the Paris pact. This represents a significant change from what the public previously had been told about the danger of rising temperatures.
As one Greenpeace activist told the Washington Post, “1.5 degrees is the new 2 degrees.” The media tipped us off earlier this year that the pivot was in the works, and scientists were poised to insist the 2 degree threshold was too high.
Coral Davenport, a dutiful climate scribe for the New York Times, justified the scientific sleight-of-hand. “Previous work had focused on estimating the damage if average temperatures were to rise by a larger number, 2 degrees Celsius, because that was the threshold scientists previously considered for the most severe effects of climate change. The new report, however, shows that many of those effects will come much sooner.”
Davenport talked to scientists who’ve worked on this issue for years; they are allegedly stunned at the news. (This is a familiar tactic by climate change peddlers. They always pretend to be alarmed at their latest prediction just so we know how really, really serious it is.) “It is quite a shock, and quite concerning. We were not aware of this just a few years ago,” one former IPCC scientist told Davenport.
So much for “settled science.”
But the climate cabal’s latest prediction isn’t shocking or scientific at all: It’s political. The reason the doomsday number has been lowered is not that the threat suddenly became more acute or that their understanding of the threat suddenly became more accurate; it’s because the rapid global warming we’ve been promised over the last three decades has not occurred. A new story was needed.
In the very first IPCC report published in 1990, scientists warned that global average temperatures would rise by 0.3 degrees C a decade beginning that year: “This will result in a likely increase in global mean temperature of about [1 C] above the present value by 2025.”
In reality, according to NASA, global temperatures have increased by less than half that between 1991 to 2017. During that time period, as worldwide carbon emissions continued to spike, temperatures basically were unmoved for about 15 years, an event called the “warming hiatus.”
Is it possible that the Earth’s temperature could go up by another 0.5 C in the next seven years? Or by 2030, which is the IPCC’s newest deadline? Climate activists might say yes, but recent data suggest the trend may be the opposite. Here is one fact you won’t read splashed across the front page of the Times: Between 2016 and 2017, global temperatures dropped almost a full tenth of a degree Celsius. In other words, global warming is going in the wrong direction.
There are other indicators that 2018 will not surpass 2016 as the “hottest year on record,” either. (A claim widely disputed by climate change skeptics.) According to NOAA, “the 2018 year-to-date value was [0.52 degrees Fahrenheit] [.17 C] lower than the record high set in 2016.” Another Trump victory!
So the new IPCC report is another example of what author Marc Morano called, “the ever-receding tipping point.” In his book about the trillion-dollar farce that is the international climate change movement, Morano detailed the shifting goalposts, data manipulation, and dystopian threats that are all part of the strategy deployed by climate activists trying to influence public opinion and policy.
“What the media is not telling the public is these climate reports are self-serving reports that have predetermined outcomes,” Morano told me via email. “The U.N. hypes the climate ‘problem’ then puts itself in charge of the ‘solution.’ And the mainstream media goes along with such unmitigated nonsense.”
Indeed they did. The usual suspects—the New York Times, the Washington Post, CNN—all ran breathless articles and editorials touting the new findings. “The Trump administration rejects the science of climate change and actively favors dirty energy sources over clean ones. Humanity has no time for such foolishness,” wrote Post columnist Eugene Robinson. Some even questioned whether or not to bring children into such a doomed world. (Here, let me help you with that question: Please don’t.)
But the origins of this panic have little do with actual threats to the environment or humanity, and everything to do with the Left’s crusade to impose higher taxes and crushing government regulations while cherry-picking favored industries that enrich their donors and friends. The lowering of the doomsday number is just another attempt to hasten a massive restructuring of the global economy. Nonetheless, climate activists will try to convince you that paying $240 for a gallon of gas really would be in your best interest if only you understood your interests properly: it’s all for the children and for the planet, of course.
Just remember: When taking the advice of climate change prophets of doom, never pay close attention to the details or to the changing nature of their predicted doom and destruction. You’ll feel better about it that way.
Posted by jtf at 2:28 PM