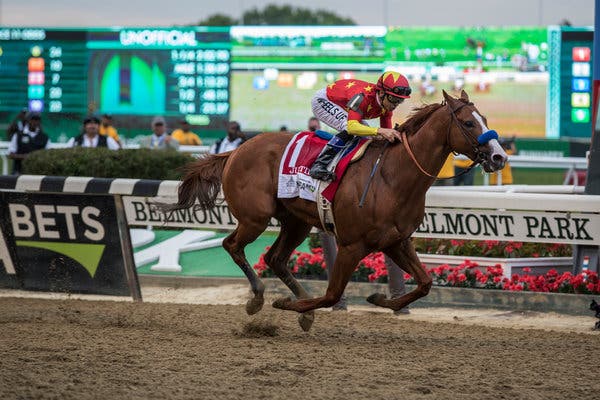 Justify, ridden by Mike Smith, won the 13th Triple Crown Saturday with a victory in the Belmont Stakes.CreditVictor J. Blue for The New York Times
Cheered on by fans wearing yellow foam crowns instead of the Egyptian headdresses that greeted American Pharoah in 2015, Justify won the Belmont Stakes in emphatic fashion on Saturday to earn a crown of his own. Some may believe it is not as golden as American Pharoah’s, but it is a crown nonetheless.
With a white blaze, a sweeping stride and an unblemished record, Justify came to the site where Pharoah ended a 37-year Triple Crown drought and, guided by the same trainer, took his own shot at history.
Ridden by the 52-year-old ironman Mike Smith, Justify did not disappoint the crowd of about 90,000 as he quickly went to the lead and stayed there, despite a pack of contenders closing in behind him, to capture the 150th Belmont Stakes by a length and three-quarters and become the 13th Triple Crown winner.

Justify completed the mile and a half on a (finally) fast track in 2 minutes 28.18 seconds to become the second undefeated Triple Crown winner, along with Seattle Slew in 1977, and reward his backers with $3.60 on a $2 bet to win. A motoring Gronkowski, in a bit of a surprise (except maybe to New England Patriots fans), came from last place to finish second and paid $13.80 to place. Hofburg was third.

“The great ones, they just find another gear,” Justify’s trainer, Bob Baffert, said, adding, “If he was great, he’s going to do it, and that’s what it’s about.”

After the race, Smith and Justify went off, around the clubhouse turn, to have a quiet moment. Smith, who had earned the nickname Big Money Mike but had never won horse racing’s most coveted prize, was moved to tears. How did he land this horse, who did not race as a 2-year-old, who rattled off six straight victories in about four months, who carried Smith beyond even his wildest dreams?
But Smith had to gather himself because he wanted to bring Justify back to the fans, who stood and cheered and snapped pictures as he took a victory lap past the expansive Belmont Park grandstand.

“This horse ran a tremendous race,” Smith said while flashing his customary wide grin. “He’s so gifted; he was sent from heaven. I can’t even begin to describe my emotions right now.”

Baffert, 65, seemed to keep his composure as he walked to the winner’s circle, stopping to pat Ron Turcotte, the jockey for Secretariat, the ninth Triple Crown champion, on the back. But inside he was battling emotions as he became only the second trainer to secure two Triple Crowns, joining James Fitzsimmons, who was known as Sunny Jim and trained Gallant Fox and Omaha in the 1930s.
“American Pharoah, he’ll always be my first love,” Baffert said, “but, man, for this horse to do it.”

Since Wednesday, when Justify pulled up to Barn 1 at Belmont Park, minus the police escort that Pharoah had received, Baffert had appeared at ease. Gone were the nerves from 2015, when the curse of 37 years and the hopes of many rested on his shoulders.

He called his crew Camp Justify, and the bucolic corner barn setting fit the bill. Owners, fans and even rival trainers stopped by to sneak a peek at the undefeated winner of the Kentucky Derby and the Preakness Stakes.

Save for a news helicopter circling during training hours, the scene was as mellow as could be — a mere three years between Triple Crown attempts will have such an effect. But it is said that history repeats, and it certainly seemed that way on Saturday. The great Secretariat ended a 25-year drought in 1973 in record fashion, then, four years later, Seattle Slew came along to put his perfect stamp on the feat.
The next year, the classic rivalry of Affirmed and Alydar reached its peak when Affirmed inched ahead by a head to become the last Triple Crown winner until Pharoah arrived.

The drought had lasted so long that many began to believe that the sweep would never again be accomplished. Now there have been two coronations over four Triple Crown seasons.

Justify conquered the slop on May 5 to become the first horse since 1882 to win a Kentucky Derby without having raced as a 2-year-old and followed that feat with a damp and daring Preakness victory through a soupy fog on May 16 that sent him to New York with the crown on the line.
“Is he the next American Pharoah?” Baffert was asked throughout, and by the Belmont, he believed the answer was yes (although, for the record, he still thinks Pharoah could beat Justify).

Still, the Belmont was Justify’s sixth race since mid-February, and his previous two had come on sloppy tracks, surely taking a toll. He seemed to have recovered nicely from a hoof bruise after the Derby, but this mile-and-a-half race — the Test of the Champion — can expose even the most bulletproof horses.

Justify’s next chapter is yet to be written. Before the Preakness, WinStar Farm, China Horse Club and SF Racing, who owned his breeding rights, agreed to a reported $60 million deal with Coolmore, which stands American Pharoah at stud. There was to be a bonus of about $25 million if Justify won the crown. It is unclear whether he will race again, although his owners said they would consider it.

Insurance alone would probably cost more than they could collect in purses for the rest of the year. But American Pharoah went on to win the Haskell and the Breeders’ Cup Classic before retiring in the fall of 2015.
This day, though, was all about Justify’s achievement.
His jockey had a new look for the race, wearing China Horse Club’s red silks with yellow stars instead of the customary white silks with a green star that represent WinStar Farm. It was a matter of rotation among the owners. Baffert is highly superstitious, but he had no choice.
When the gate opened, the switch did not matter one bit. Justify stepped into the gate and stood perfectly still, almost too still, Smith said. But he broke cleanly — a must in Baffert’s book — and went to the lead, setting a furious pace. Smith slowed him and let him get into a rhythm.