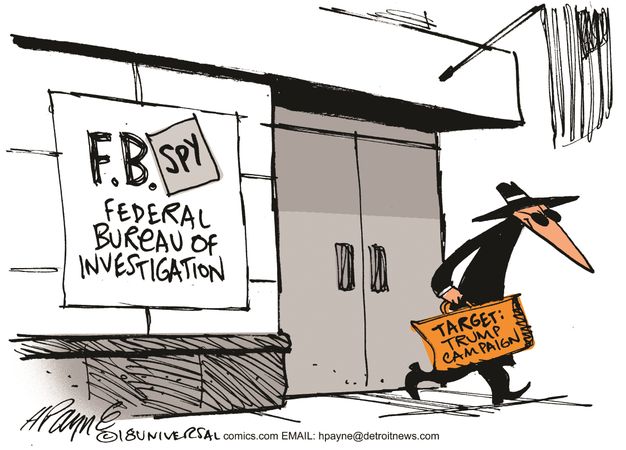 At the end of all the scandal and drama, all of the breathlessly reported lies and false accusations, at the end of all the money wasted on some zany kabuki swamp dance choreographed to the thrumming of giant bullfrogs and yipping of excited coyotes — at the end of all of this — it comes down to precisely what we said it was a year and a half ago.
The Obama administration — with or without the knowledge and direction of President Obama himself — perverted one of the most powerful, clandestine spying operations in the world and used it at the very height of a presidential campaign to spy on political opponents, punish them and, ultimately, silence them through extortion.

If this was orchestrated without the express knowledge of Mr. Obama, then it reveals just how blatantly he instructed by example the weaponizing of the entire federal government to carry out his low, dishonest and unjust ideology. By any means necessary, one might say. Only instead of being driving by visions of justice, these people were driven by visions of undying power.
If this conspiracy was carried out at the express direction of Mr. Obama or other high officials in his administration, then they belong in jail. From unmasking of political opponents, to leaking their names to the press, to killing legitimate investigations, to launching politically motivated witch hunts, a racket of this scale could not have been carried out without some major juice and cover at the top levels of the Department of Justice, FBI and the White House.
The rogue henchmen carrying out the dirty work, as always, presented as perfect, decent and most honest little Boy Scouts like former FBI Director James B. Comey.
Most of the FBI today must be horrified by the degree to which Mr. Comey and his goon squad handed over the entire mission of the FBI to political hacks inside the Obama administration. Still, there were far too many inside the bureau willing to junk their oath in the name of some kind of higher “justice.” Which is just another way of saying “selling their soul for partisan gain.”
What the Obama administration did to infiltrate the Trump campaign, spy on political opponents and then launch a wicked vendetta against them is worse than anything J. Edgar Hoover ever did — at least that we know about.
It is worse than any of the domestic abuses by the CIA during the Cold War.
It is worse even than what the federal government did to undermine civil rights activists like Martin Luther King Jr.
As bad and corrupt as it is to harass innocent citizens under any circumstances, it is so much worse to weaponize the government to pursue and punish and eliminate domestic political opponents. That is the sort of thing that destroys a Republic.
And yes, it is even much worse than Watergate. At the end of the day, Watergate was a bungled break-in by low-level political hacks. And then it was about the political cover-up and how high it went.
What happened under Mr. Obama is the stuff of Third-World dictators.
When Donald Trump was running for president, establishment Republicans and Democrats alike ran around thumping their chests feigning outrage that Mr. Trump would not be capable of respecting the Constitution.
At that time, the Obama administration was spying on Mr. Trump and his campaign and carrying out the most extensive and brazen undercover espionage-war campaign against political opponents that we have ever seen.
All the while nary a peep from these same smarmy swamp creatures as Mr. Obama rolled the constitution into joints so he and his political Choom Gang could smoke bales of weed.
• Contact Charles Hurt at churt@washingtontimes.com or on Twitter at @charleshurt.
Posted by jtf at 7:18 AM