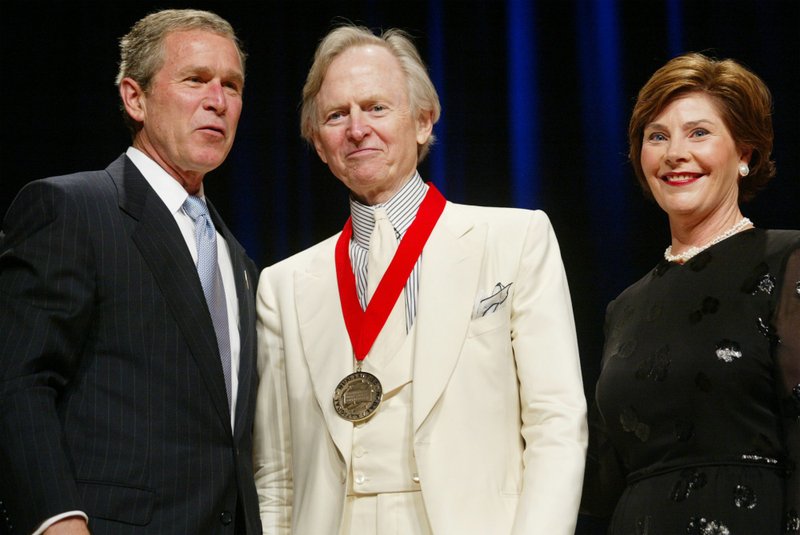 In this April 22, 2002 file photo, President Bush, left, poses with author Tom Wolfe, center, and first lady Laura Bush during the National Endowment for the Arts National Medal Awards ceremony at Constitution Hall in Washington . Wolfe was a recipient of the National Humanities Medal. Wolfe died at a New York City hospital. He was 88. (AP Photo/Pablo Martinez Monsivais)

The bursts of asterisks, the scattering of exclamation points and ellipses, the syncopated distribution of repeated phrases and capitalized words — one could spot a Tom Wolfe sentence a room away. He seemed astonished by America, and he expressed that astonishment in sentences that zinged up and out like bottle rockets.

Wolfe, who died on Monday at 88, was a breaker of journalistic conventions at a time when American society was breaking many of its own, and his was a style other writers liked to imitate and parody. Kurt Vonnegut, in his review of “The Kandy-Kolored Tangerine-Flake Streamline Baby” (1965), Wolfe’s first book, wrote: “Holy animals! Sebaceous sleepers! Oxymorons and serpentae carminael! Tabescent! Infarcted! Stretchpants netherworld! Schlock!”


Vonnegut was on more solid ground when he considered whether the young Wolfe more resembled Mark Twain or an extra member of the Beatles. With his trademark white linen suits and two-tone shoes, Wolfe did later seem like a dandified figure from the cover of “Sgt. Pepper’s Lonely Hearts Club Band.”
Wolfe’s pyrotechnics wouldn’t have mattered had he not been a brilliantly gifted social observer and satirist. Whether writing about stock car races or the upper reaches of Manhattan society (“Radical Chic and Mau-Mauing the Flak Catchers”) or hitching a cross-country ride with Ken Kesey and the Merry Pranksters for “The Electric Kool-Aid Acid Test” (1968), he made a fetish of close and often comically slashing detail.
A kind of label-maker on wheels, he put more phrases into popular usage than any writer of his era: The Me Decade. The Right Stuff. Masters of the Universe. Radical Chic. Good Old Boy. Social X-rays. Pushing the Envelope. (Sometimes these fizzled. No one speaks of “the purple decades.”)
As the field commander of the so-called New Journalism, Wolfe made it plain that methodology — namely, immersive reporting — mattered as much as an eye-popping present-tense style. Kesey felt compelled to say to him, “Tom, why don’t you put that notebook and that ballpoint pen away and just Be Here?”
Yet Wolfe wasn’t always, to borrow the title of a Nora Ephron book, merely a wallflower at the orgy. He could be a useful irritant, unafraid of kicking up at the pretensions of the literary establishment.
In 1965, he wrote a 15,000-word two-part takedown — its title was “Tiny Mummies!” — of what he saw as William Shawn’s somnambulant New Yorker. He later wrote about Robert Silvers, the editor of The New York Review of Books: “His accent arrived mysteriously one day in a box from London. Intrigued, he slapped it into his mouth like a set of teeth.” These skirmishes with the establishment would presage others.
Wolfe found a subject as many-angled as his ambitions with “The Right Stuff” (1979), his electric portrait of test pilots in the early days of NASA. As Paul Fussell pointed out in The New York Times Book Review, “Just as Mr. Wolfe hates human vices and follies, he loves their opposites — manifestations of competence, courage and skill.”

The words seemed to pour freely from Wolfe, yet this was a misperception. He struggled writing the 1963 piece that would anchor “Streamline Baby” and make his name, for example. In frustration, he sent his editor at Esquire his notes — they were published intact. To insure he’d finish his big, joyful and neon-lit first novel, “The Bonfire of the Vanities” (1987), he arranged for Rolling Stone to serialize it. He wrote the first draft in public.

As a novelist, Wolfe self-consciously modeled himself on writers like Émile Zola and William Makepeace Thackeray, who attempted in their fiction to move past their own personal experience and capture wide swaths of society. Wolfe did a good deal of research for “Bonfire of the Vanities,” a novel about what happens after a bond trader on the way back to Manhattan from J.F.K. Airport takes a wrong turn at night in the Bronx and, after a confrontation, accidentally hits a young black man with his car.

Wolfe shadowed members of the Bronx homicide squad and lingered at the Manhattan criminal court. He made his case for this kind of immersion in an essay, “Stalking the Billion-Footed Beast,” which ran in Harper’s Magazine in 1989.

“At this weak, pale, tabescent moment in the history of American literature, we need a battalion, a brigade, of Zolas to head out into this wild, bizarre, unpredictable, Hog-stomping, Baroque country of ours and reclaim it as literary property,” he wrote.

Norman Mailer read this and commented: “One has to applaud his moxie. Only an innocent or a simpleton could fail to recognize that a live hornet was being deposited in the crevice of every literary seat in town.”

Wolfe would tangle with Mailer, John Updike and John Irving over their negative reactions to his second novel, “A Man in Full” (1998). Updike called the novel “entertainment, not literature, even literature in a modest aspirant form.” Mailer compared reading the 742-page book to making love to a 300-pound woman. (“Once she gets on top, it’s over. Fall in love, or be asphyxiated.”) Wolfe responded in an essay titled “My Three Stooges.”

Wolfe’s two later novels, “I Am Charlotte Simmons” (2004), about sex and status and a small-town girl at an elite college, and “Back to Blood” (2012), about Cuban immigrants in Miami, were not as well received.

Wolfe frequently mocked the follies of youth, yet his own prose did not seem to age at all. In a collection titled “Hooking Up” (2000) he delivered what can be read as his credo:

“America is a wonderful country! I mean it! No honest writer would challenge that statement! The human comedy never runs out of material! It never lets you down!”