'Chappaquiddick' and the power of myth Frogmen dive into the water as they try to raise the car belonging to Edward Kennedy Photo: GETTY

"Chappaquiddick” is an impressive, fascinating and clinical film about a young Ted Kennedy, the power of myth and the corrosive cynicism of mythmakers.
And so the other day, in a Chicago movie theater, as the closing credits were rolling, people left their seats without saying, “I really liked it” or “I really hated it.”
The theater was as silent as that quiet moment just after a sigh.
But one man enjoyed “Chappaquiddick” so much that he gave it a slow long clap that went on and on. A few moviegoers — obviously aging baby boomers raised on Camelot — stared at him in irritation, their hands on hips, heads tilted, like peeved, graying birds.
But he just kept on slow clapping because it was the right thing to do.
“Chappaquiddick” is set some 50 years ago, on a warm July night in 1969, when Edward “Ted” Kennedy (Jason Clarke) drives off a bridge and into the water, then leaves Mary Jo Kopechne (Kate Mara) alone in the car to die.
That it has taken so long to tell this story on film is an indictment of the cynical politics of Hollywood. But in this film, there is at least one moral character: Kennedy’s cousin, Joe Gargan (Ed Helms).
After Kennedy abandoned Kopechne in the water, he walks all the way back to his rented house. Gargan sees him there, dripping wet and staring out into space.
“Come on, Teddy,” says Gargan. “What’s the big idea?”
“I’m not going to be president,” Kennedy says.
It is an astonishingly honest line, full of self-pity, full of real pain, full of the heavy weight of family obligation and the memory of his late brothers Joe, John and Robert.
It was just one line in a superb performance by Clarke, and oddly, even while he pities himself, you can feel some pity for the man.
He could have shouted it, but he simply said it, as a flat fact of life, or as an inconvenient truth.
Yet as he said it, Mary Jo was trapped in the black Oldsmobile in the water, gasping in an air bubble in the submerged car, saying the Lord’s Prayer, suffocating alone.
Predictably, some reviewers have panned “Chappaquiddick” or nitpicked this detail or that, pronouncing the movie a failure because, they insist, old Joseph Kennedy had suffered a stroke and couldn’t have possibly uttered the word “alibi.”
But for all that, every American who thinks and reads and bemoans the lack of intellectual honesty in our politics may feel a small obligation to see “Chappaquiddick” and think on it afterward.
Why?
Because selling American politics is all about the selling of myth, and America has been spoon-fed the “Camelot” saga of the Kennedys and their tragedies by an adoring media for decades.
So perhaps a few Americans might have at least a passing interest in seeing how that myth works and at what cost and who pays.
What we do know is that in the proper hands, mythology is a tool that can be used to buy some much-needed time.
For the Kennedys, time enough to craft a media strategy, time to get Kopechne’s body out of Massachusetts, time to get the right investigators, time to make sure Ted wouldn’t go to prison.
And that would give him time to drink and time to go to seed, time to become the liberal lion of the Senate, loved by Democrats and revered by the media, as his liberal politics were and are the media’s liberal politics.
There would even be time later for Kennedy to run for president, and time for him to be held up as the champion of women’s rights, even as he’d rub up, unsolicited, against a waitress to make his infamous “waitress sandwich.”
But all that would come later. 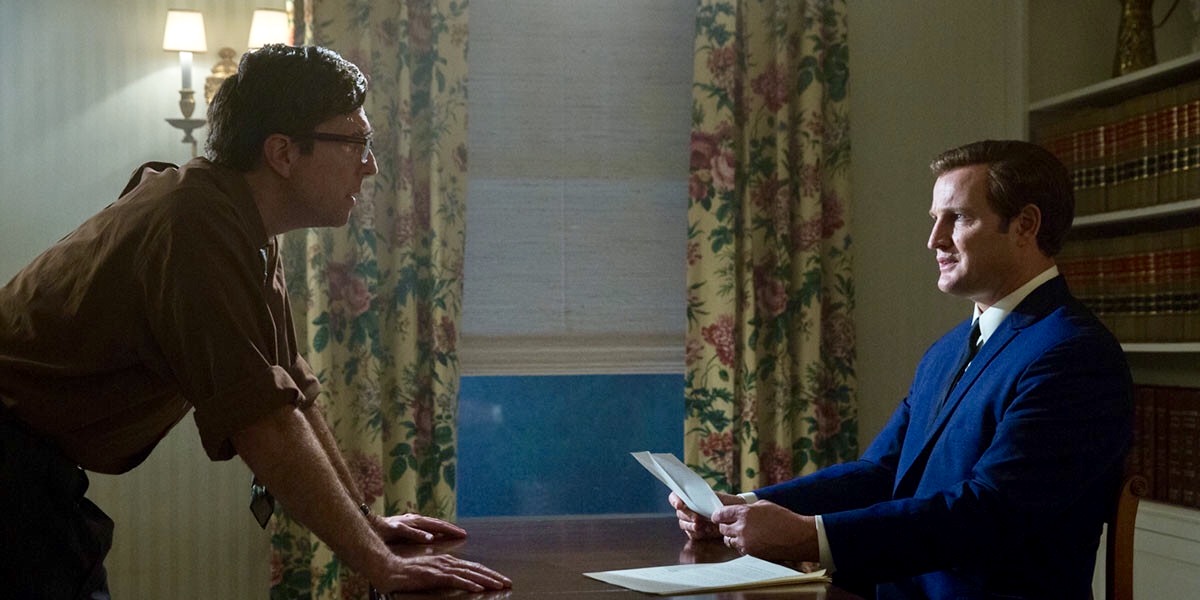 Ed Helms and Jason Clarke in 'Chappaquiddick'
“Chappaquiddick” concerns itself with Ted Kennedy needing enough time to step over Mary Jo Kopechne’s corpse.
That’s where the wise-men come in, called by patriarch Joe Kennedy to the family compound in Hyannis Port, Mass., to spin the story back under control.
They did what political masters do best, manipulate the American desire for myth and feed it to us to protect young Ted Kennedy.
They couldn’t do it alone; they needed help. And because much of establishment media revered the Kennedys, they figured help would come.
Spitballing their plans about the timing of the news leak, about the importance of getting the body out of Massachusetts, how best to steer news coverage long enough for America to be overwhelmed by a fantastic event coming days later that would dominate the news:
Those first steps of man walking on the moon.
In the group of media alchemists called upon to save Ted Kennedy were former Defense Secretary and Kennedy man Robert McNamara (Clancy Brown) and mythmaker Ted Sorensen (Taylor Nichols).
Sorensen was President John F. Kennedy’s speechwriter and the ghostwriter of “Profiles in Courage” for which Kennedy — not Sorensen — received the coveted Pulitzer Prize.
I’d read the book as a little boy, a book all about great moral courage. But there was little courage in “Chappaquiddick,” as those great wise-men helped Ted Kennedy step over that young woman who died alone in his car, after he’d abandoned her.
And when it was over, I couldn’t help but slow clap as the credits rolled.
“You really liked this movie that much?” asked a pleasant woman from Arkansas.
Yes, I did.
And I’d see it again, if only to remind me of how great men honor themselves, protected by honored spinners who pull those strings tied to American hearts.
Listen to “The Chicago Way” podcast featuring John Kass and Jeff Carlin athttp://wgnradio.com/category/wgn-plus/thechicagoway.
jskass@chicagotribune.com
Twitter @John_Kass
RELATED
'Chappaquiddick' review: Selling a tragedy, the Kennedy way »
'Chappaquiddick' is a murky exploration of an infamous political scandal »
Jason Clarke takes the spotlight in 'Chappaquiddick' »